The company said it will make the investment amounting to Rs500million, at 10 per share for this reason.

“The main goal of the wholly-owned subsidiary is to acquire the manufacturing of mobile devices of the selected brand(s),” read the announcement. 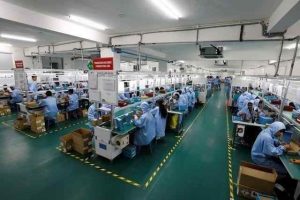 In the month of August Air Link launched its Initial Public Offering (IPO) which was a huge success, with the IPO being well-subscribed 1.6 times.

Book-building led to the strike price being Rs71.5 at the close of the two-day procedure.

Air Link IPO book-building resulted in the strike price of Rs71.5 and an offer that was exceeded 1.64 times

The company is among the largest distributors of mobile phones in Pakistan with an estimated market share of 20% in the market for import mobile phones, stated Ismail Iqbal Securities at the time of the IPO.

The smartphone market in Pakistan has seen an increase in international players in the last few months, and the country’s young population has made it an appealing market for manufacturers of mobile phones.

Recently, Chinese company Vivo opened its first smartphone manufacturing plant in Pakistan and has other competitors like Xiaomi and Realme are already preparing to launch local manufacturing facilities in the coming months.

Lucky Motor Corporation (LMC) is one of the subsidiaries of Lucky Cement Limited, also signed an agreement with Samsung Gulf Electronics Co., FZE (Samsung) for the manufacture of Samsung-branded mobiles in Pakistan.

Kim Lagen’s Interview for Flare Magazine  Q1. How would you define ‘Spirit of Math’? What’s the idea behind it? Spirit of Math is a system ... Read More

Ufone partners with Islamabad United as its favourite network