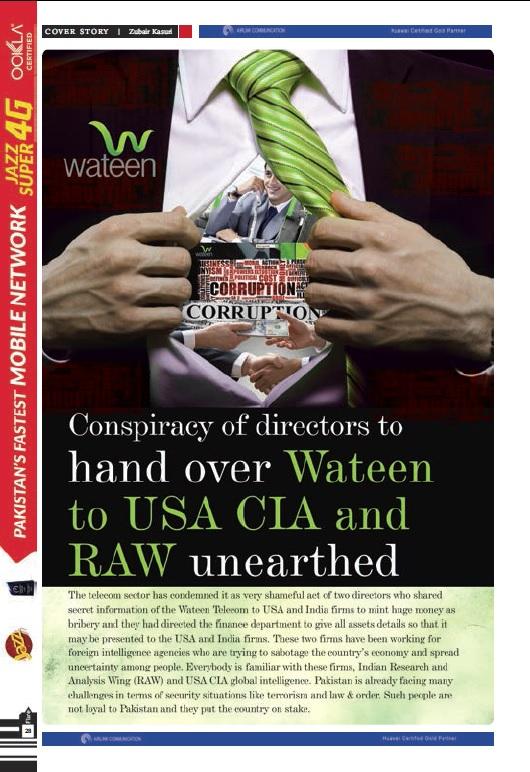 The telecom sector has condemned it as very shameful act of two directors who shared secret information of the Wateen Telecom to USA and India firms to mint huge money as bribery and they had directed the finance department to give all assets details so that it may be presented to the USA and India firms. These two firms have been working for foreign intelligence agencies who are trying to sabotage the country’s economy and spread uncertainty among people. Everybody is familiar with these firms, Indian Research and Analysis Wing (RAW) and USA CIA global intelligence. Pakistan is already facing many challenges in terms of security situations like terrorism and law & order. Such people are not loyal to Pakistan and they put the country on stake. 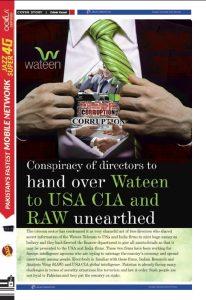 It is interesting to note that they showed the Wateen Telecom office in Malaysia and all transactions were made there. It has been proved that they were also involved in money laundering and tax evading around Rs 4.3 billion resultantly government of Pakistan lost billion of rupees in term of taxes.

Following the removal of two senior directors of Abu Dhabi Group in mega corruption scandal has jolted IT and service provider companies in Pakistan. All the companies put on high alert and started to verify its assets to avoid corruption and malpractices.

It has not spoiled the soft image of Pakistan but also discouraged direct foreign investments. No doubt, Pakistan and UAE enjoy strong brotherly relations, cordial & diverse since the inception of the Emirates. Emeriti Royal family played a major role in fortifying this relationship but such blacksheeps may ruin the good relation of both the countries.

It is interesting to note that they showed the Wateen Telecom office in Malaysia and all transactions were made there. It has been proved that they were also involved in money laundering and tax evading around Rs 4.3 billion resultantly government of Pakistan lost billion of rupees in term of taxes. 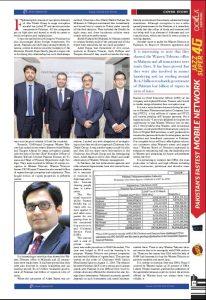 When the corruption of Adeel Bajwa was unearthed, Chairman Abu Dhabi Sheikh Nahyan bin Mubarak Al Nahyan terminated him immediately and bound him to remain in Dubai under custody till the final decision. They befooled the Sheikh for eight years and drew handsome salaries every month with zero performance.

Sheikh Nahyan bin Mubarak Al Nahyan ordered to conduct forensic audit of the company and till the report both executives did not move anywhere.

Adeel Bajwa had threatened of dire consequences to Rizwan Tiwana, Aqib Zulfiqar and Tauqeer Ahmad if they would not tender the resignations. I sacked you with allegations of wrongdoing so that they would not approach Chairman Abu Dhabi Group. It was another aspect to safe his skin and they did not share more information to the Chairman Abu Dhabi Group and his investigating team. Adeel Bajwa is still in Abu Dhabi and under observation of Wateen Telecom management.

In Pakistan, the law enforcement agencies and other relevant departments have also started investigation whether he is innocent or involved in espionage activities because sharing people data is cybercrime.

The National Accountability Bureau (NAB) has already sent notices against it and other companies for not paying dues to the concerned departments and Universal Service Fund (USF).

The sources said a case of private company was under procedure in NAB Islamabad. The case was lodged in 2018 and the hearing is in progress. Wateen Telecom and private companies are involved in billions of rupees fraud. The case registered on the order of Chairman NAB Justice (Retd) Javed Iqbal on August 11, 2018. The relation between Pakistan-UAE is very strong and it always stands with Pakistan in any difficult time. Such incidents obviously effected the relations but also foreign direct investments. Pakistan’s economic growth depends on such investments and needs business-friendly environment that attracts substantial foreign investment. Although corruption is not a widespread phenomenon in the Pakistan, it is unrealistic to think that this influx of funds and investors will not bring with it an element of dishonest and corrupt practices, which are found in every society to varying degrees.

Another move to stable the Wateen Telecom in Pakistan, its Board of Directors appointed Adil Rashid as Chief Executive Officer (CEO) of the company and replaced Rizwan Tiwana, who forced to tender resign otherwise face corruption case.

It is not a wise decision because during his service in Pakistan Telecommunication Company Limited (PTCL), it lost millions of rupees and PTCL still receive pending wifi hotspot payment. He is happy and said: “I am truly delighted to be given the opportunity to lead Wateen Telecom into its next era. I firmly believe that Wateen, with its national presence, countrywide fiber infrastructure, and portfolio of Digital B2B solutions, is well positioned to become the partner-of-choice for enterprises, service providers and broadband customers in Pakistan. Our complete focus will be to offer highest value to our customers using Wateen’s assets and experience.” Wateen Board of Directors expressed its pleasure in welcoming Adil into the leadership role at Wateen and witnessing his future achievements within the firm.

It is pertaining to mention here DHA, the most posh areas in Lahore and high officials including army, bureaucrat, politicians and showbiz icons resided there. There is only Wateen Telecom internet service due to its monopoly with DHA authority. These are the reason that USA with the help of RAW had interested to buy the Wateen Telecom to get their sensitive and secret data.

It is worthy to mention here that DHA Phase 5 covered by Wateen makes up 25 percent of DHA Lahore. People, however, question the uselessness of the agreement because as per its record, the services offered by Wateen have not always been very

Building Your Trust with Quality – Why OPPO is the Best Choice

With over 15 years of Excellency, OPPO as a leading global smartphone brand carries the mission of bringing technology created with heart and soul to ... Read More

Realme brings a gift from another planet for its fans, a unique trendsetting designer toy “realmeow”

Cheetay.pk, one of Pakistan’s leading e-Commerce platforms has collaborated with a modern analytic solution company called Modemetric. It is a well-established Business Intelligence organisation with ... Read More