“Like some models of Samsung M Series are active but when the users approached to PTA for registration to these mobile phones, it was disclosed that no such mobiles was introduced officially in Pakistan. These mobiles are not being included in this system so dealers are losing millions of rupees in this regard” 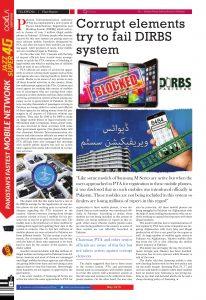 pakistan Telecommunication Authority (PTA) has implemented a new system of Device Identification, Registration and Blocking System (DIRBS) which will re­sult in closure of over 3 million illegal mobile phones in Pakistan. All those people who become inactive by this new system are paying taxes on their relevant mobile franchises designated by PTA and after few hours their mobiles are work­ing again. After payment of taxes, these mobile sets are considered legal in Pakistan.

On the other side, FIA, Customs with the help of airport officials have started some arrange­ments to tackle the PTA initiative of blocking il­legal mobile sets which is making loss of millions daily in term of tax collection.

PTA officials are aware of all this but appar­ently no action is being made against such actions and agents who are creating hurdle to failure the system. Media is not aware of any action in stop all these harmful activities in the country. Some law enforcement agencies like FIA, Customs and travel agents are making fake entries of mobiles sets of passengers who are coming from other countries on their mobiles and thus these mobiles are being activated on system without paying any penny as tax to government of Pakistan. In this way everyday thousands of passengers arriving in Pakistan are being added to system and officials of these agencies are taking money from the pas­sengers in all airports of Pakistan without any problem. They take Rs 1500 to Rs 3000 to make an illegal mobile phone to legal resultantly over 500 million daily corruptions. Some airport work­ers also involved in these activities with some other government agencies. One phone dealer told that chairman Pakistan Telecommunication Au­thority and other senior officials are aware of this fact but not taken action against corrupt elements. PTA officials have also arranged few meetings with mobile phone dealers but still no action taken against this mafia who involved in corrup­tion activities.

The dealer told that this mafia has fix a rate of Rs 2000 in average for the legalization of one mo­bile phone set and nothing goes in national ex­chequer regarding the PTA initiative in the country. Almost everyone coming from foreign countries carried at least 2 mobiles for his per­sonal use or may be as gift for his dear ones. The middle man is the beneficiary of these mobiles by making them legal and updating their date in the system at airports. Due to this fact millions of mobiles phones are now activated in Pakistan are from different brands. Till this system is not bio­metric, the corruption will increase day-by-day with the help of those who supposed to be work hard to earn for the country at the airports, the dealer added.

Another renowned dealer told that millions of illegal mobiles are being sold in Pakistan from dif­ferent countries and most of them are rummaged and illegal mobiles but these agencies and officials are getting bribe from them and not taking action against them to stop this business. Interestingly these handsets are not register or approved by the government.

Like some models of Samsung M Series are active but when the users approached to PTA for registration to these mobile phones, it was dis­closed that no such mobiles was introduced offi­cially in Pakistan. According to dealer, these mobiles are not being included in this system so dealers are losing millions of rupees in this re­gard. Other many Chinese mobile phones users are also facing problem in the country as some of their models are not officially launched in Pakistan.

The dealer suggested that due to these issues in the current system, PTA and government should work in consultation with mobile dealers to revise this system with a biometric system so that all taxes and revenues to be collected in trans­parent manner. On the other hand, the user may also be protected. All these mobile phones are being smuggled to Pakistan via Afghanistan with the help of some leading businessmen who are ac­tively working to expand their business with these illegal handsets.

The dealer told that due to implementation of new regime by PTA now some companies are tar­geting Afghanistan with their fake and illegal products but all this is not good for the region as well. As huge number of mobiles again return to Pakistan via Afghanistan. Huawei mobile after ban from the US is also affecting the mobile phone industry in Pakistan.

The dealer was not happy the way the crisis be­tween Google and Huawei has been handled. Everyone has its own opinion while Huawei is talk of the town.

The dealer told that Samsung mobile is also now cheating dealers with its own new policy and cut the profit margin. Samsung Plus, J4, J 7 and A16 are sold falsely to dealers while these mobiles have no market now. Samsung is not giving mo­biles as per deal and demand which can be said a cheap cheating policy of Samsung.

With the ease in travel restrictions worldwide and reopening of Montenegro’s borders tourists and investors, one of the largest residentialdevelopments and superyacht marinas in...
Read more
Offers

For the first time in the history of L’Oréal Paris Skin Expert, the Skin Expert team at the brand’s Paris headquarters has handpicked and...
Read more

CLARIFICATION ON WEB TV & OVER THE TOP (OTT) CONSULTATION BY PEMRA

This is apropos the stories published in Daily Dawn, The News & Daily Jang on Draft Consultation on Regulating the Web TV & Over...
Read more
Telecom