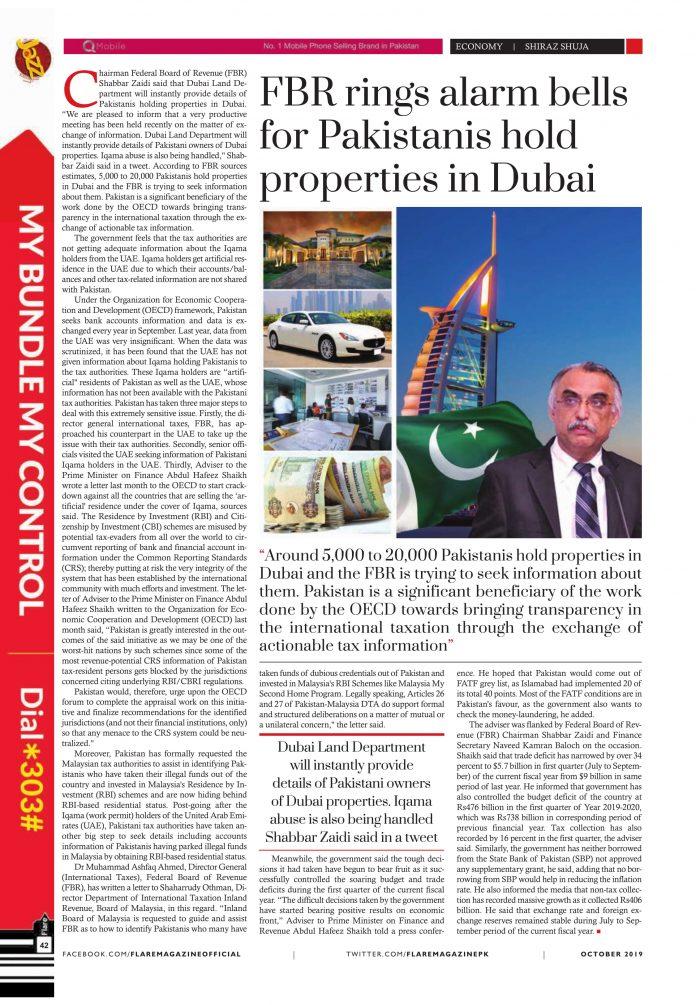 Around 5,000 to 20,000 Pakistanis hold properties in Dubai and the FBR is trying to seek information about them. Pakistan is a significant beneficiary of the work done by the OECD towards bringing transparency in the international taxation through the exchange of actionable tax information 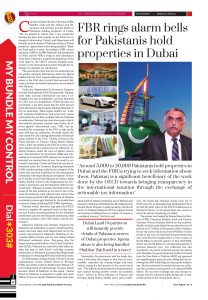 According to FBR sources estimates, 5,000 to 20,000 Pakistanis hold properties in Dubai and the FBR is trying to seek information about them. Pakistan is a significant beneficiary of the work done by the OECD towards bringing transparency in the international taxation through the exchange of actionable tax information.

The government feels that the tax authorities are not getting adequate information about the Iqama holders from the UAE. Iqama holders get artificial residence in the UAE due to which their accounts/balances and other tax-related information are not shared with Pakistan.

Under the Organization for Economic Cooperation and Development (OECD) framework, Pakistan seeks bank accounts information and data is exchanged every year in September. Last year, data from the UAE was very insignificant. When the data was scrutinized, it has been found that the UAE has not given information about Iqama holding Pakistanis to the tax authorities. These Iqama holders are “artificial” residents of Pakistan as well as the UAE, whose information has not been available with the Pakistani tax authorities. Pakistan has taken three major steps to deal with this extremely sensitive issue. Firstly, the director general international taxes, FBR, has approached his counterpart in the UAE to take up the issue with their tax authorities. Secondly, senior officials visited the UAE seeking information of Pakistani Iqama holders in the UAE. Thirdly, Adviser to the Prime Minister on Finance Abdul Hafeez Shaikh wrote a letter last month to the OECD to start crackdown against all the countries that are selling the ‘artificial’ residence under the cover of Iqama, sources said.

The Residence by Investment (RBI) and Citizenship by Investment (CBI) schemes are misused by potential tax-evaders from all over the world to circumvent reporting of bank and financial account information under the Common Reporting Standards (CRS); thereby putting at risk the very integrity of the system that has been established by the international community with much efforts and investment.

The letter of Adviser to the Prime Minister on Finance Abdul Hafeez Shaikh written to the Organization for Economic Cooperation and Development (OECD) last month said, “Pakistan is greatly interested in the outcomes of the said initiative as we may be one of the worst-hit nations by such schemes since some of the most revenue-potential CRS information of Pakistan tax-resident persons gets blocked by the jurisdictions concerned citing underlying RBI/CBRI regulations.

Pakistan would, therefore, urge upon the OECD forum to complete the appraisal work on this initiative and finalize recommendations for the identified jurisdictions (and not their financial institutions, only) so that any menace to the CRS system could be neutralized.”

Moreover, Pakistan has formally requested the Malaysian tax authorities to assist in identifying Pakistanis who have taken their illegal funds out of the country and invested in Malaysia’s Residence by Investment (RBI) schemes and are now hiding behind RBI-based residential status. Post-going after the Iqama (work permit) holders of the United Arab Emirates (UAE), Pakistani tax authorities have taken another big step to seek details including accounts information of Pakistanis having parked illegal funds in Malaysia by obtaining RBI-based residential status.

Dr Muhammad Ashfaq Ahmed, Director General (International Taxes), Federal Board of Revenue (FBR), has written a letter to Shaharrudy Othman, Director Department of International Taxation Inland Revenue, Board of Malaysia, in this regard. “Inland Board of Malaysia is requested to guide and assist FBR as to how to identify Pakistanis who many have taken funds of dubious credentials out of Pakistan and invested in Malaysia’s RBI Schemes like Malaysia My Second Home Program. Legally speaking, Articles 26 and 27 of Pakistan-Malaysia DTA do support formal and structured deliberations on a matter of mutual or a unilateral concern,” the letter said.

Meanwhile, the government said the tough decisions it had taken have begun to bear fruit as it successfully controlled the soaring budget and trade deficits during the first quarter of the current fiscal year.

“The difficult decisions taken by the government have started bearing positive results on economic front,” Adviser to Prime Minister on Finance and Revenue Abdul Hafeez Shaikh told a press conference.

He hoped that Pakistan would come out of FATF grey list, as Islamabad had implemented 20 of its total 40 points. Most of the FATF conditions are in Pakistan’s favour, as the government also wants to check the money-laundering, he added.

The adviser was flanked by Federal Board of Revenue (FBR) Chairman Shabbar Zaidi and Finance Secretary Naveed Kamran Baloch on the occasion.

Shaikh said that trade deficit has narrowed by over 34 percent to $5.7 billion in first quarter (July to September) of the current fiscal year from $9 billion in same period of last year.

He informed that government has also controlled the budget deficit of the country at Rs476 billion in the first quarter of Year 2019-2020, which was Rs738 billion in corresponding period of previous financial year.

Tax collection has also recorded by 16 percent in the first quarter, the adviser said. Similarly, the government has neither borrowed from the State Bank of Pakistan (SBP) not approved any supplementary grant, he said, adding that no borrowing from SBP would help in reducing the inflation rate.

He also informed the media that non-tax collection has recorded massive growth as it collected Rs406 billion. He said that exchange rate and foreign exchange reserves remained stable during July to September period of the current fiscal year.