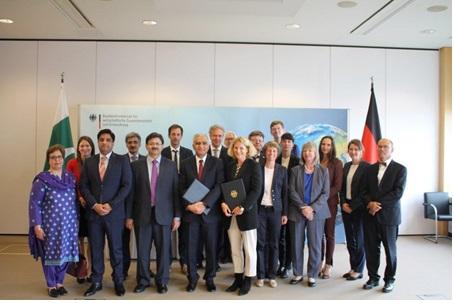 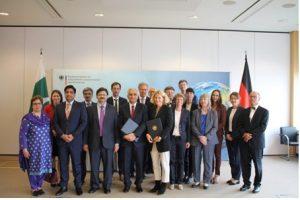 The Pakistani Delegation was headed by Mr. Noor Ahmed, Secretary, EAD and included representatives of the Ministry of Foreign Affairs and the provinces of Khyber Pakhtunkhwa and Punjab. The Delegation of the Federal Republic of Germany was headed by Ms. Gisela Hammerschmidt, Director for Asia at the German Federal Ministry for Economic Cooperation and Development and included participants from the German Foreign Office, KfW, GIZ and BGR.

The two sides took stock of the existing Development Cooperation and expressed satisfaction at the trajectory of cooperation in different areas since 1961. As a result of the Negotiations, Germany committed € 109 Million for future German Development Cooperation in Pakistan in addition to the on-going portfolio. The German side committed grants worth € 84 Million for financial and technical assistance projects along with a concessional loan worth € 25 Million. During the current talks, both sides underlined the importance of close cooperation and partnership.

The Pakistani Delegation briefed the German counterparts about current and planned development priorities of the Pakistani Government, which include a stronger focus on transparency, institutional reforms, poverty alleviation, human resource development and green energy. Both sides exchanged views on increasing the cost effectiveness of development assistance initiatives and the measures to enhance cooperation with the private sector.

The Pakistani side extended an invitation to the German Delegation to visit Pakistan in the near future, which was accepted by the German side.

Haleeb Milk returns – as Pakistan’s first and only Nutra-Hygin milk   In line with its commitment to provide superior dairy products to the people of...
Read more