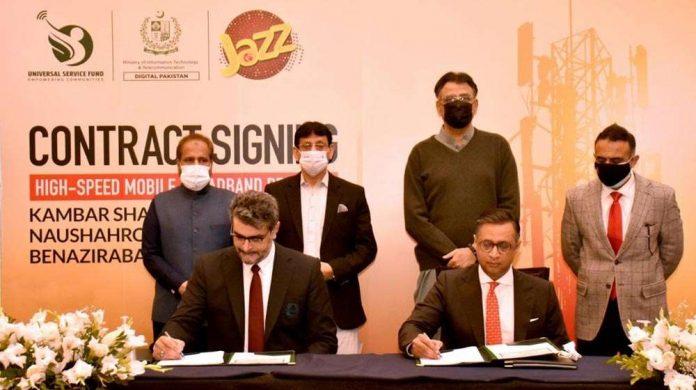 USF to provide 4G connectivity in rural Sindh  the Universal Service Fund (USF) to provide 4G services in Kambar Shahdadkot. Larkana, Naushahro Feroze and Shaheed Benazirabad districts of Sindh. Jazz will install a total of 90 cell sites, Including Technology Upgrades, sector addition and power upgrades to provide data and voice services to 719 mauzas that fall under the four districts.

Talking at the event, Asif Aziz, Chief Commercial Officer, Jazz, said. “Providing reliable mobile broadband to all our fellow citizens remains a key priority at Jazz. Through this collaboration with USF. 719 unserved mauzas of rural Sindh will be able to access high speed mobile broadband which will unlock unlimited. Socio-economic opportunities for the residents.” He also warned that the country is in a state of digital emergency and the proposed. move to increase WHT on telecom users and a 17 percent sales tax on smartphones and laptops will further push the country behind its global peers.

Syed Aminul Haque pledged to fight the case for the IT and Telecom users. In front of the special committee setup by Prime Minister Imran Khan, to deliberate on the mini-budget. Matter of 15 percent telecom WHT and 17 percent sales tax on digital devices.

Asad Umar mentioned that digitalisation is key to the country’s future with which billions of dollars can be added to the Economy, and called for conducive policies that don’t look at the IT and Telecom sector with a fiscal lens. “For our youth and their innovative ideas, we need policies that reduce barriers to entry. Especially the cost associated with connectivity, digital tools and setting up a business. For this purpose, my full support is with Minister for IT and Telecom. Syed Aminul Haque as he seeks a revisit of the taxation proposal.”

Haaris Mahmood Chaudhry. Chief Executive Officer of USF, while giving details about the performance of USF and two new projects for Sindh. Said that as per the directives of Federal Minister Syed Amin Ul Haq. All projects completed within the stipulated time frame with high standard and quality.

Explore the Gorgeous with vivo and Win Exclusive Gifts

Huawei brings another exciting twist to the pre-booking of its all new flagship smart phone Huawei Mate 8. In response to the customers’ feedback...
Read more
Uncategorized

After reaching the prolific milestone of being the first telecom company to have 10,000 operational 4G sites across the country, Zong 4G, Pakistan's number...
Read more