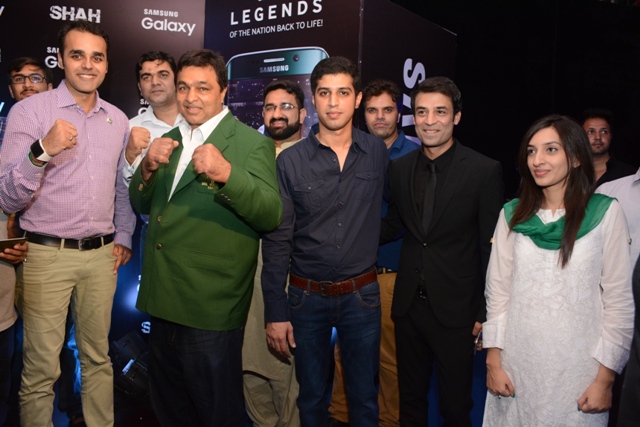 Artistically produced projects like – ‘Shah’ are breathing a new life into the decaying film industry of Pakistan and inspiring fresh talent in the society – MD Samsung Pakistan.

Based on the real-life events, struggle and achievements of Pakistan’s unsung hero, Hussain Shah – a biographical sports movie – ‘Shah’, directed by Adnan Sarwar is all set to hit the Pakistani Cinemas and inspire the society with the fiery passion of the Only Olympic Bronze Medal Winner in Boxing from Pakistan. The launch of this movie has been sponsored by Samsung – the global technology leader. This mega feature film highlights the challenges faced by Hussain Shah, while rising up from a most impoverished slum of Karachi, to attain this glorious stature in the world. Looking at the reviews and response from the masses, this film promises to be a block buster. Samsung Pakistan remains at the forefront of promoting culture and the human-spirit through various social development and inspirational initiatives. Going beyond philanthropy, social entrepreneurship, healthcare, education and economic wellbeing of the deprived segments, Samsung has been consistently playing its role as a highly responsible corporate citizen of Pakistan.

Following this tradition of promoting social emancipation, Samsung has once again sponsored the mega feature film “Shah”, produced by the talented and creative young man – Adnan Sarwar, who has also played the lead-role of Hussain Shah in the movie. Samsung is always inspired to highlight the achievements of our immensely talented youth, like the boxer Hussain Shah, who brought home the Bronze medal after his thrilling victory in 1988 Summer Olympics, whereby he became the only Boxer in the Pakistan’s history to achieve an Olympic Medal in a tough sport like Boxing.

Samsung Pakistan’s MD, Mr. J.H. Lee has expressed his excitement in these words,” We are utterly thrilled to be a part of this mega project, as we can foresee that “Shah” – the movie, is going excite and the nation and influence countless lives in a positive way. It will instill greater ambitions and passion to overcome life’s demoralizing challenges and emerge as a winner in today’s competitive world. Projects like this movie are needed to bring positive changes in the nation’s mindset, to help them work hard to realize their true potential and earn respect and honor among the global community.”

This movie premiere show was held on 14th August at Cinestar in Township Lahore, where, along with Hussain Shah and the cast of this movie, major celebrities from the Showbiz and sporting world  participated enthusiastically, paying tribute to the boxer and appreciate this commendable effort by the film’s production team.

With over 12 million 4G customers, Pakistan’ No.1 Data Network, Zong 4G is carrying the largest 4G subscribers base on the widest 4G network with ... Read More