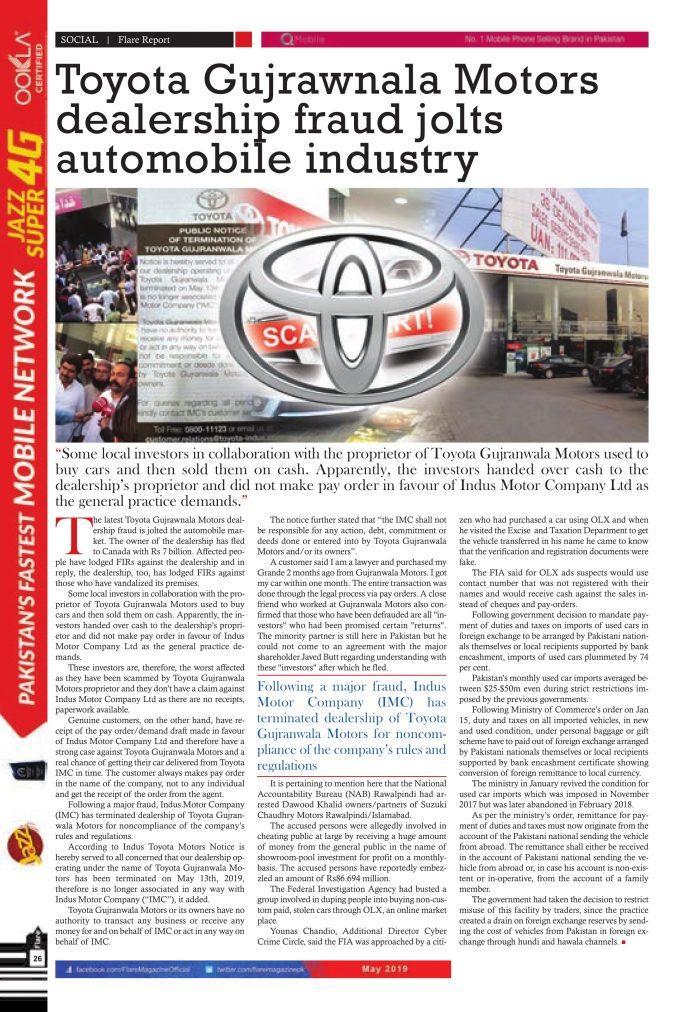 “Some local investors in collaboration with the proprietor of Toyota Gujranwala Motors used to buy cars and then sold them on cash. Apparently, the investors handed over cash to the

dealership’s proprietor and did not make pay order in favour of Indus Motor Company Ltd as the general practice demands.”

Gujranwala Motors for noncompliance of the company’s rules and regulations 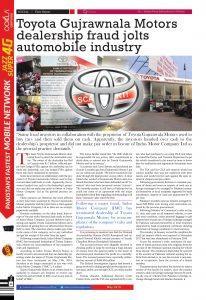 Some local investors in collaboration with the proprietor of Toyota Gujranwala Motors used to buy cars and then sold them on cash. Apparently, the investors handed over cash to the dealership’s proprietor and did not make pay order in favour of Indus Motor Company Ltd as the general practice demands.

These investors are, therefore, the worst affected as they have been scammed by Toyota Gujranwala Motors proprietor and they don’t have a claim against Indus Motor Company Ltd as there are no receipts, paperwork available.

Genuine customers, on the other hand, have receipt of the pay order/demand draft made in favour of Indus Motor Company Ltd and therefore have a strong case against Toyota Gujranwala Motors and a real chance of getting their car delivered from Toyota IMC in time. The customer always makes pay order in the name of the company, not to any individual and get the receipt of the order from the agent.

Following a major fraud, Indus Motor Company (IMC) has terminated dealership of Toyota Gujranwala Motors for noncompliance of the company’s rules and regulations.

According to Indus Toyota Motors Notice is hereby served to all concerned that our dealership operating under the name of Toyota Gujranwala Motors has been terminated on May 13th, 2019, therefore is no longer associated in any way with Indus Motor Company (“IMC”), it added.

The notice further stated that “the IMC shall not be responsible for any action, debt, commitment or deeds done or entered into by Toyota Gujranwala Motors and/or its owners”.

A customer said I am a lawyer and purchased my Grande 2 months ago from Gujranwala Motors. I got my car within one month. The entire transaction was done through the legal process via pay orders. A close friend who worked at Gujranwala Motors also confirmed that those who have been defrauded are all “investors” who had been promised certain “returns”. The minority partner is still here in Pakistan but he could not come to an agreement with the major shareholder Javed Butt regarding understanding with these “investors” after which he fled.

It is pertaining to mention here that the National Accountability Bureau (NAB) Rawalpindi had arrested Dawood Khalid owners/partners of Suzuki Chaudhry Motors Rawalpindi/Islamabad.

The accused persons were allegedly involved in cheating public at large by receiving a huge amount of money from the general public in the name of showroom-pool investment for profit on a monthly-basis. The accused persons have reportedly embezzled an amount of Rs86.694 million.

Younas Chandio, Additional Director Cyber Crime Circle, said the FIA was approached by a citizen who had purchased a car using OLX and when he visited the Excise  and Taxation Department to get the vehicle transferred in his name he came to know that the verification and registration documents were fake.

The FIA said for OLX ads suspects would use contact number that was not registered with their names and would receive cash against the sales instead of cheques and pay-orders.

Following Ministry of Commerce’s order on Jan 15, duty and taxes on all imported vehicles, in new and used condition, under personal baggage or gift scheme have to paid out of foreign exchange arranged by Pakistani nationals themselves or local recipients supported by bank encashment certificate showing conversion of foreign remittance to local currency.

The ministry in January revived the condition for used car imports which was imposed in November 2017 but was later abandoned in February 2018.

The government had taken the decision to restrict misuse of this facility by traders, since the practice created a drain on foreign exchange reserves by sending the cost of vehicles from Pakistan in foreign exchange through hundi and hawala channels.

41% increase in revenues, 5 points increase in seat factor and over 90% reliability of schedule. PIA has achieved unprecedented numbers of performance and...
Read more
Business