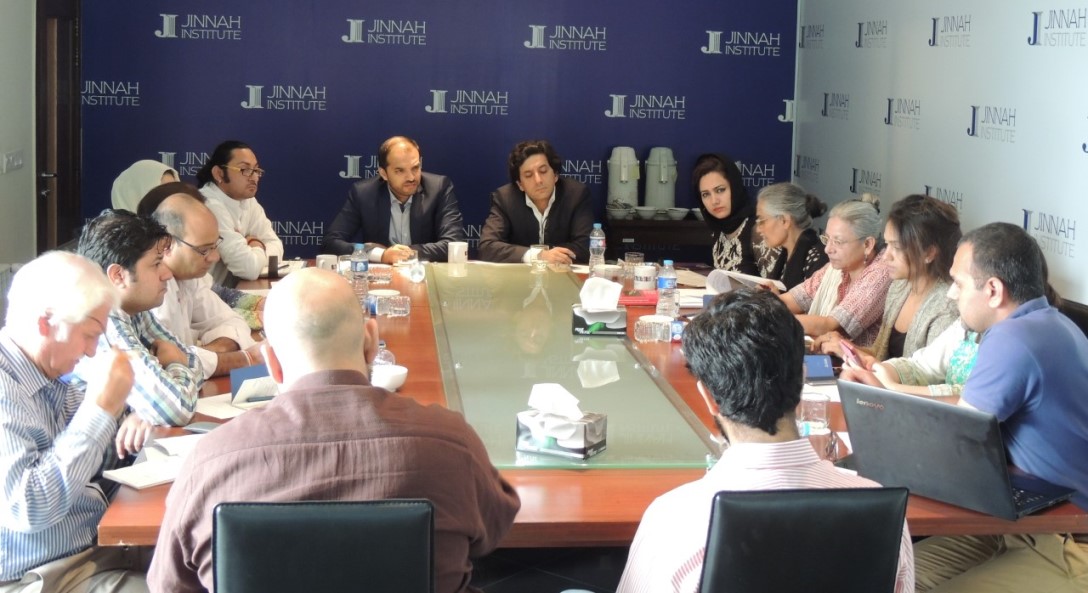 Islamabad, July 23, 2016: The state has obligations and binding commitments to protect the right to information and freedom of expression of its citizens, which are being curtailed in the Cyber Crime Bill. This was the assertion made by participants at the Jinnah Institute round table titled “Beyond the Firewall: Freedom of Speech in a Censored Democracy”.  Among the issues identified at the roundtable was a lack of clarity as to what constitutes an offence under the Bill. Participants noted that confusing Cyber crime and cyber terrorism has meant that very high punishment has been proscribed for cyber crime. They suggested that the Anti-Terrorism Act, which already includes surveillance mechanisms for electronic terrorism, should be used to monitor and punish cyber terrorists.Participants urged that it was important to distinguish between matters of national security and public interest, to ensure that the powers granted for surveillance and investigation are not misused. It was suggested that subsections within the law which negatively impact freedom of expression should be identified and accordingly amended. It was noted that the proposed bill does not distinguish between telecom offences, cybercrimes and others, and has increased the liability placed on businesses and service providers. This has led to an increase in censorship on social media and other platforms, which are important tools for citizen awareness and collective action. PEMRA’s recent bans on movies, television shows and advertisements were used as examples to highlight the recent increase in electronic censorship.With media expanding in Pakistan, there is definitely need for regulation, but not at the expense of privacy. Under the bill, investigative officers are not subject to a fixed procedure of accountability when they follow up on complaints, and can use acquired data as per their discretion. As there is no data protection legislation present, participants acknowledged that the retention of data runs contrary to the right of privacy.It is a very critical time to take action on the Cyber Crime Bill, as changes will go back to National Assembly and elongate the process. It is essential to identify exactly where curtailments are coming from and how citizens can approach it, in order to safeguard freedoms guaranteed under the Constitution.Jinnah Institute is an independent public policy think-tank whose mandate is to bridge the gap between citizens and state by articulating policy responses based on inclusive research, and creating awareness, expanding knowledge bases and facilitating the implementation of recommendations for policy-makers.

A high-level judicial delegation from Pakistan visited Turkey from 4-10 April. They had wide-ranging briefings and interaction with senior Turkish officials and counterparts.  Mr. Muhammad ... Read More

Infinix Smart 3 Plus – All set to Share the Stage with Other High End Brands!

Infinix is about to bring an all new innovation on the shelves with value adding features and this calls for being an utmost perfection packed ... Read More