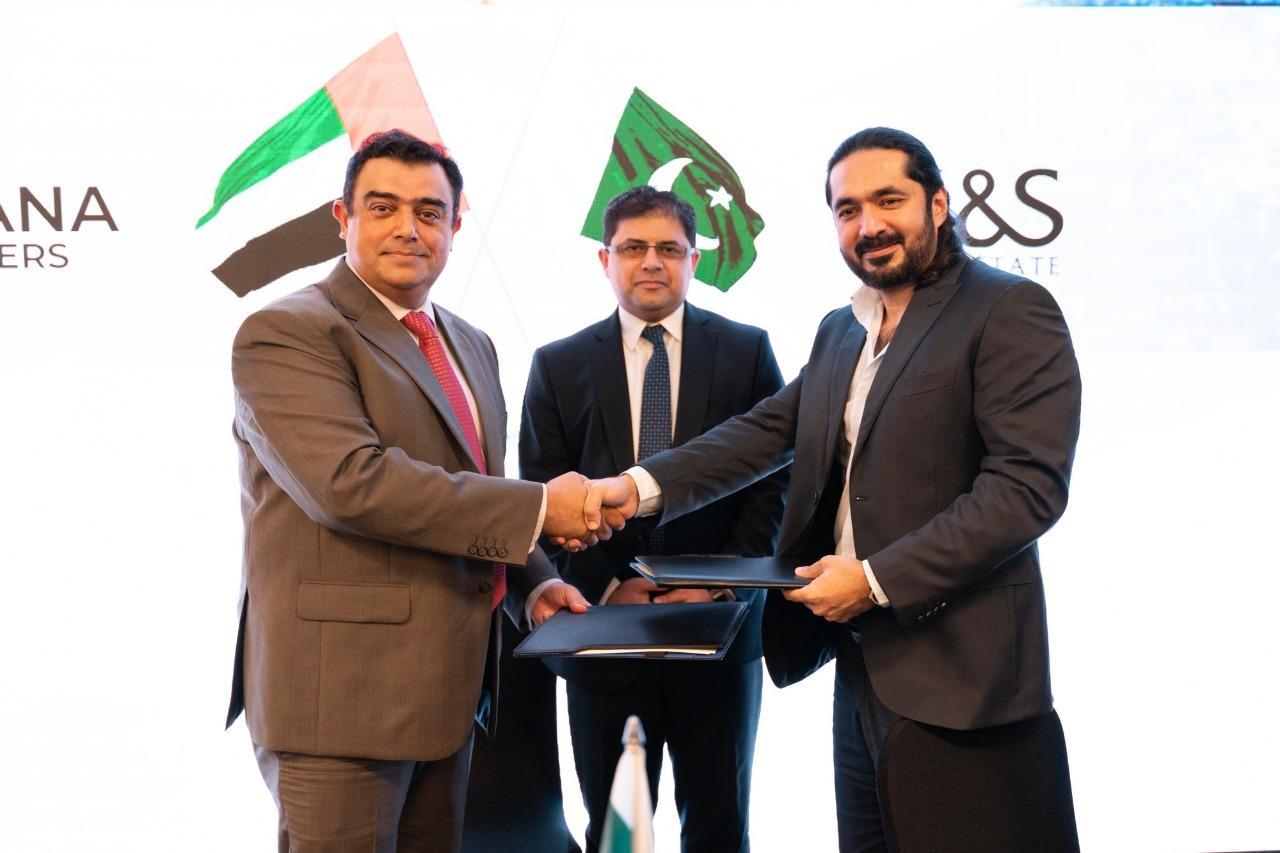 Dubai’s Top Realtors to Enter Pakistan. A multi-billion rupees investment agreement has been signed for Pakistan’s real estate sector as Dubai-based Samana Developers, one of the top 20 real estate developers in the UAE and a subsidiary of diversified Samana Group, has signed a key partnership with H&S Real Estate, a Dubai’s Top Realtors-based top performing real estate brokerage agency.
This decision was announced by senior officials of both the business giants at a joint press conference held in Dubai on Thursday.
The partnership of Dubai’s Top Realtors to Enter Pakistan has launched Emirates Developers, a new real estate development company incorporated in Pakistan. Emirates Developers will build mixed-used resort-themed communities in the tourist hotspots of Pakistan.
The agreement signing ceremony was witnessed by His Excellency Hassan Afzal Khan, Consul-General of Pakistan to Dubai, along with officials of the Consulate General of Pakistan, Samana Developers and H&S Real Estate.
His Excellency Hassan Afzal Khan, Pakistan Consul-General to Dubai, while appreciating the strategic partnership, said: “It is a proud moment for all of us and for the Pakistani community in Dubai that we are witnessing a double success story of Samana Developers and H&S Real Estate going to be replicated in Pakistan. I believe that the two well reputed real estate companies with their vision are going to create a new milestone in the real estate sector of Pakistan and attract much-needed investment to our homeland. I, on behalf of my colleagues in Pakistan mission in the UAE, share our best wishes to the success of Samana Developers, H&S Real Estate and the new venture Emirates Developers.”
Multi-award-winning and ranked amongst Top 50 Real Estate Companies in the Middle East, Samana Developers, is among top 20 real estate developers in the UAE. Throughout 2021 it was ranked number 16th in terms of the number of units sold out in a set timeframe. The ranking reflects the success of Samana Developers and its CEO Imran Farooq’s business strategy which focuses the end-user. For 2022, Samana Developers is looking at increased market share and expecting 35% more sales revenue projection in the UAE.
Mr. Imran Farooq, CEO of Samana Developers, said: “We are coming to Pakistan with high ambitions and bullish mindset. Despite the drop in currency, Pakistan’s real estate market is quite attractive with year-on-year growth projection as we see Pakistan’s population, which needs housing, continues to grow.
“We are not only developing another brick-and-mortar project but a lifestyle development with state-of-the-art amenities at par with the international standards, which we have achieved in Dubai. I believe today’s developers need to think outside the box to fill the gap between innovation, lifestyle and construction. That’s what we practiced in Dubai with Samana Developers. It gives a solid reason to buyers and end-users to invest in our projects. Our end-user business model has helped to be resilient during the Covid-19 pandemic. During the lockdown, we kept on building, and did not stop which continued the workflow, hence, cash flow from buyers to vendors.”
He added: “We had a choice of choosing a plot for single building but that would not be a lifestyle. That is the reason we picked up a cluster of large plots to create a community with facilities and amenities required for a good lifestyle. Anything one needs in a five-star hotel, will be available in the premium Emirates Developers projects at prime locations in Pakistan.”
Mr. Emad Haq, Vice-Chairman, and H&S Real Estate, said: “We believe it is a perfect synergy of two property experts with international experience – Emirates Developers and H&S Real Estate – who will present a living experience in Pakistan which will be unmatched. With group’s 50 plus years of combined experience in residential and commercial luxury real estate development, Emirates Resort project will be a jewel in the heart of beautifully landscaped Islamabad in close proximity to Murree, the lush green resort town in Pakistan.”
Emirates Developers will build a series of projects in Pakistan. Projects will develop a lifestyle with high-end luxury resort-themed apartments and fully-serviced. Residential projects will include one, two, and three-bedroom apartments, penthouses and suites of different size. Amenities will include round-the-clock concierge service, ambulance service, limo, chef-on-demand, nanny-on-demand, driver-on-demand, fine-dining, rooftop restaurants, basketball, volleyball, squash courts, gyms, jogging tracks, skate park, yoga studios, swimming pools, parks, rock climbing, kids play areas, access control system and round-the-clock security.
Emirates Developers will launch first mega project at a tourist hotspot of Pakistan in January 2022. Details of the projects will be revealed at a press conference to be held in Islamabad, the capital of Pakistan.

APBF Recommends Broadening Of Tax Base Through Legislation

APBF Recommends Broadening Of Tax Base Through Legislation  (APBF PR: May 7th, 2016) - The All Pakistan Business Forum has recommended the broadening of tax ... Read More