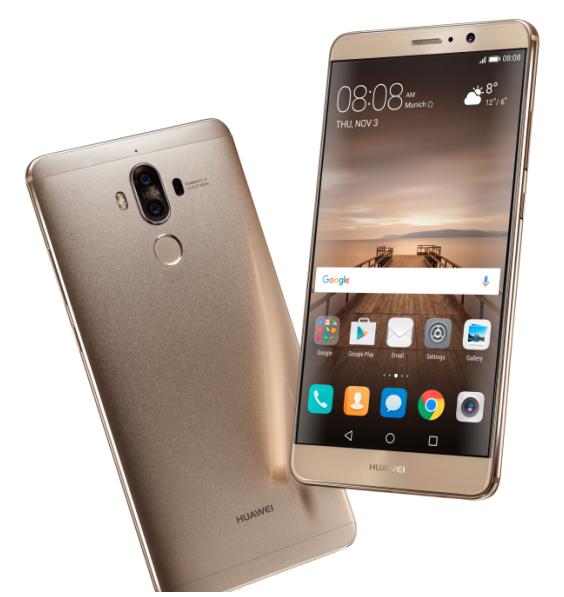 Lahore 10th November, 2016: Over the years smartphones have steadily grown in size, but at 5.9 inches the Huawei Mate 9 is comfortably larger than the norm, dwarfing even some other phablets.Thankfully, it has more than just a big screen, with high-end specs and an innovative camera, paired with a premium build. You can’t talk about the Huawei Mate 9 without talking about the screen, as it’s far and away the most immediately obvious highlight.That’s mostly thanks to its sheer size – at 5.9-inches it’s far bigger than other big screen high end phones with screen sizes of 5.5-inch and 5.7-inch.All that size makes it great for enjoying videos on or viewing web pages without having to zoom and scroll too much. The Mate 9 has a high-end design. It comes with a metal shell, that’s surprisingly slim at just 7.9mm thick yet the phone is very compact all round. At 156.9 x 78.9mm it’s not really any more of a handful than the the bigger high end phones in the market currently – you can thank the small bezels around the sides of the screen for that, and it’s a design decision that also makes the phone quite striking when viewed front-on.At 190g the Mate 9 is less in weight than you might expect for a device with a 5.9-inch screen, and it’s certainly not going to weigh you down.

With 4GB of RAM and an octa-core processor the Huawei Mate 9 has all the power you’d expect, though rather than using a Snapdragon chip it uses a home-grown Kirin 960. This is a big upgrade on Huawei’s previous flagship processor, delivering up to 200% better gaming and 3D graphics performance.The chip has four cores clocked at 2.4GHz and four lower power ones running at 1.8GHz, which it uses to save battery life when it doesn’t need as much power.Performance is slick throughout, whether gaming, streaming or browsing, and through machine learning the phone will remain slick even once it’s clogged up with apps, by optimizing resources based on the ways you use the phone. Along with the screen this is a real highpoint of the Huawei Mate 9, as it has a dual-lens camera on the back. This is less of a novelty than it once was, but is still far from the norm.In the Mate 9’s case there’s a 20MP monochrome lens and a 12MP RGB one. For the most part you’ll be using both lenses for each individual photo, allowing it to capture data from both, for more detailed images.But if you fancy taking some arty black and white shots you can use the monochrome lens on its own. Sure, other phones and apps have black and white modes, but they use a filter, which looks less authentic than the real deal.The Mate 9 also sports optical image stabilisation, which helps keep your photos in focus, especially in low light. A dual-LED flash meanwhile ensures low-light shots are bright, while retaining their natural colours, and phase detection and laser autofocus makes the camera fast to fire.Around the front there is also the 8MP selfie snapper.

The Huawei Mate 9 has more than a few notable features. Firstly, there’s its rear-mounted fingerprint scanner, which sits comfortably under the finger when you hold the phone.Then there’s the operating system. It runs Android of course, but more specifically it runs Android Nougat, which is the latest and greatest version of Google’s mobile OS.It is overlaid with the fairly heavy Emotion UI 5.0 though, but this is a lot better than in years past, and has an extremely clean look.

There’s a big 4000mAh battery in the Huawei Mate 9, which should easily get you through a day of use and is likely to last a day and a half if you’re not a real power user. USB Type-C means there’s also fast charging, not to mention a cable that can be plugged in either way around.Memory comes in at a very generous 64GB – that’s the only available size, but should be more than enough for most users. If you do need more there’s also a microSD card slot with support for cards of up to 256GB.Connectivity options include Wi-Fi, 3G, 4G, Bluetooth 4.2 and NFC – which coupled with the fingerprint scanner means it’s fully set up for contactless payments.The Huawei Mate 9 is a strong phablet, with a truly massive screen, lots of power, a big battery, a great camera, a premium build and up to date software.The exact price is yet to be confirmed, but, even with the high price it’s likely to have, this is one of the very best most advanced Android phablets currently available, and could even tempt any competitor fans who want something bigger than 5.5 inches.

The Jazz Business Golf Tournament 2019, a premium amateur golfing tournament of Pakistan, concluded its 2nd round at Defence Raya Golf and Country Club in ... Read More