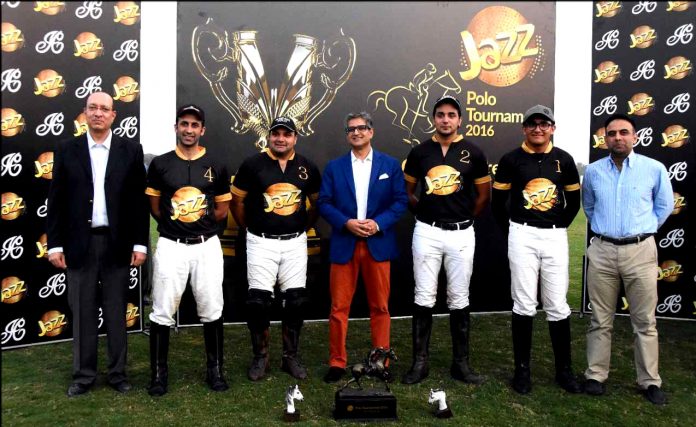 Islamabad – 24th October, 2016: The Jazz Polo Tournament, which took place at the Islamabad Club’s Polo Ground, concluded with Team Jazz Gold taking home the trophy.The tournament was in line with Jazz’s promise toempower societies by providing relevant resources to guide them towards success.

Jazz Gold, a brand for premium customers, organized this polo tournament in collaboration with Islamabad Club to promote the ‘Game of Kings’ and build an affinity with the brand.The four team tournament, consisting of both local and international professional players, got underway on the 19th of October, 2016 with the final taking place on the 23rd of October, 2016. Two goals by Jazz Gold’s Aun supported by a half-goal handicap helped the team narrowly edge out Team 4Horsemen with the final tally being 4 ½ – 4.Speaking at the event, Asif Aziz, CCO – Mobilink stated, “Congratulations to the winning team for showing unwavering commitment throughout the tournament.”He further added, “Jazz has been organizing various sporting events since its inception, as a means to promote sports in the country, while also highlighting the need to incorporate a healthy lifestyle amongst the public. We decided to add Polo to the growing list of sports we are supporting to promote the diversity in our customers interests.”Adding to his comments, Naveed Saeed, Regional Business Head North – Mobilink said, “Our association with Polo under Jazz Gold’s banner looks to create an affinity between the brand and Pakistan’s royal game. This is the first of many such tournaments to come.”

Prizes were distributed amongst the participants at the closing ceremony, before the trophy was handed over to Team Jazz Gold byAamir Ibrahim, CEO – Mobilink and Warid.

Jazz is an umbrella brand of Mobilink (Pakistan Mobile Communications Limited) re-introduced as a complete telecommunications ecosystem. Jazz is all set to continue Mobilink’s leadership in the telecommunications arena by spearheading a digital revolution in the country through introduction of innovative services & products. The brand’s ultimate goal is to empower every citizen of Pakistan in today’s fast paced digital economy through its primary products i.e. Jazz Internet, Jazz Voice, JazzCash, and Jazz X.

vivo’s vision is to become the bridge connecting the physical and digital worlds, said Qin Fei, head of the vivo...
Read more
Business