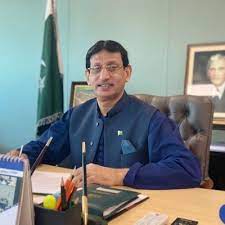 Launched 9 projects worth over PKR 8.48 Billion for provision of High Speed Mobile Broadband services and optical fiber cable projects in Sindh- Federal Minister of IT and Telecommunication

Launched 9 projects worth over PKR 8.48 Billion for provision of High Speed Mobile Broadband services and optical fiber cable projects in Sindh- Federal Minister of IT and Telecommunication

Chief Minister of Sindh, Murad Ali Shah accountable for development funds of PKR 1500 Billion that were sanctioned for the people of Sindh in the past 12 years – Syed Amin Ul Haque

Addressing the ceremony, Federal Minister for IT and Telecommunication, Syed Amin Ul Haque said, “Sindh is not governed by Pakistan Tehreek-e-Insaf (PTI) or Muttahida Qaumi Movement (MQM) and for the past 12 years, Pakistan Peoples Party (PPP) has been occupying the province- a party that does not care about the people or their interests. During its 12 years in power, PPP gave the people of this province nothing but poverty, unemployment, broken roads, sewerage and water issues, along with health and education problems. Journalists are also being subjected to false charges, bullying, intimidation, torture and even murder. We strongly condemn this and demand that the cases against the journalists be dropped immediately and that justice be provided to the families of the ones who were martyred.”
The Federal Minister for IT and Telecommunication added that necessary steps were being taken for the development of Sindh including the provision of High Speed Mobile Broadband services to millions of residents of Jacobabad, Shikarpur, Kashmore and surrounding areas. Syed Amin Ul Haque said that the Ministry of IT and Telecommunication has launched 9 projects worth over PKR 8.48 Billion in the last two years focusing on improvement of network coverage and provision of High Speed Mobile Broadband services along with a number of optical fiber cable projects in Sindh.

The completion of these projects will provide facilities to 17.7 Million people in 19 districts of the province. Currently, 1,900 km of optical fiber cable is being laid which will serve educational institutions, health centers and businesses, allowing citizens to access High Speed Internet. He added that within the next few days, a 709 km long optical fiber cable project will be launched at a cost of PKR 2.1 Billion, making it another important milestone in digitalizing Pakistan.
Syed Amin ul Haque said that an indication of Sindh government and its Chief Minister, Syed Murad Ali Shah’s lack of interest in the people of the province was the fact that he never participated in the launch events for these welfare projects, despite being invited by the Ministry of IT and Telecommunication several times. He added that the government was not concerned about the public and public-interest projects.
He stated, “We have not made false promises to you, but have framed our plans and are beginning to take practical steps for Sindh. Because we believe in the politics of service, we have nothing to do with the politics of opposition.” He prompted journalists to hold the Chief Minister of Sindh accountable for development funds of more than PKR 1500 Billion that were sanctioned for the people of Sindh in the past 12 years and question where such a huge amount was spent and how has it improved lives of the citizens.

While addressing the ceremony, Federal Minister for Planning, Development, Reforms and Special Initiatives, Asad Umar and Federal Minister for Privatization, Muhammad Mian Soomro thanked the Federal Minister for IT and Telecommunication, Syed Amin Ul Haque for launching projects worth billions of rupees for the province of Sindh. They said that Prime Minister’s Digital Pakistan vision means to complete the process of digitalization and networking across the country and connect the nation to the digital world, be it the under-served areas of Karachi or the interior rural areas of Sindh. We give equal priority to all provinces even if it is governed by the opposition party. Further, they added that it is unfortunate to see that PPP has taken Sindh and its people to a place of poverty, deprivation and slavery.

Sharing his thoughts at the ceremony, CEO USF, Haaris Mahmood Chaudhary said: “Federal Minister of IT and Telecommunication, Syed Amin Ul Haque has given special instructions to spread the benefits of Information and Communication Technologies (ICTs) to all corners of Pakistan regardless of province, region, language or political affiliation. This project will benefit an unserved population of 1.09 Million in 271 unserved mauzas, thereby covering an unserved area of 3,996 sq. km. of Jacobabad, Shikarpur & Kashmore districts. The project will be completed within 12 to 18 months.”

Sharing his views on the development, CEO Jazz, Aamir Ibrahim said, “Jazz invested US$ 462 million during the last two years mainly to expand its 4G footprint in rural and semiurban areas and bridge the digital divide as we collaborate with the Government of Pakistan in realizing the #DigitalPakistan vision. Today, close to 60% of Pakistan’s population has access to Jazz’s 4G network. Through this contract, Jazz in collaboration with USF will equip over a million unserved residents of Jacobabad, Kashmore and Shikarpur districts with high-speed mobile broadband, creating socioeconomic opportunities and uplifting lives.”

Senior officials of the Ministry of IT and Telecommunication, USF and Jazz were also present at the ceremony.

As the Pakistani Rupee has depreciated significantly against the US Dollar, the leading online-driven smartphone brand of the country, Infinix, has just announced the new ... Read More

15th June, 2021. Lahore, Pakistan: AkzoNobel -the world industry leader in paints and coatings and producer of Dulux paints in Pakistan- has entered its 4th ... Read More