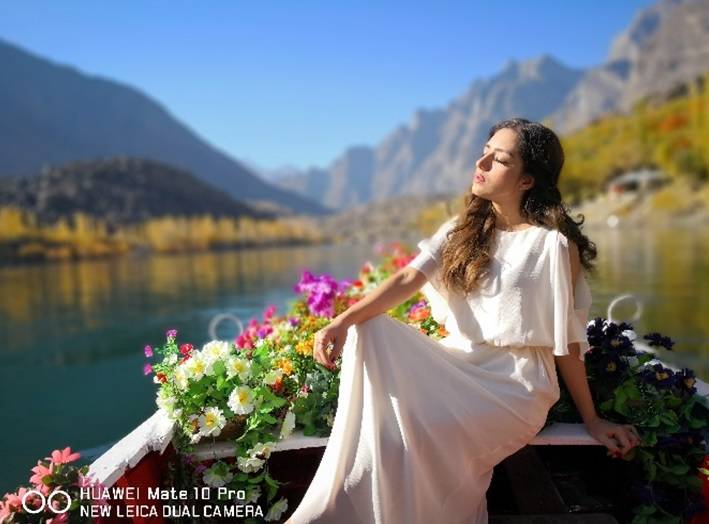 Stop what you’re doing for the country’s first-ever smartphone fashion shoot is here. Ace-photographer and Pakistan’s favourite shutterbug Tapu Javeri went on a breathktaking quest to Skardu to conduct a never-seen-before fashion shoot from a HUAWEI Mate 10 Pro – and boy are we mesmerized by the results!

Nestled on the confluence of the Indus and Shigar rivers, Skardu is the gateway to mighty mountains, scintillating lakes and wilderness that wears a different colour in every season. It was only fitting for Tapu to choose this location for an avant-garde fashion shoot.

Mahi – Tapu’s muse looked ravishing as she posed at the Shigar Cold Desert. The vast stretch of plains among high mountains gave an eclectic mix of landscape and depth to the shoot altogether. The camera on the HUAWEI Mate 10 Pro – co-engineered with Leica – captured some candid shots of Mahi dressed in vibrant travel attire through its SUMMILUX-H lenses.

Tapu Javeri loved the experience of his HUAWEI Mate 10 Pro and put its 12-megapixel RGB sensor to good use. Things got really exciting when Mahi cuddled up with colourful flowers on a boat on the scenic Upper Kachura Lake. It was a moment worth living, as the boat glided on serene waters of the lake and Tapu took vivid shots through the smartphone. An AI-powered Real-Time Sense and Object Recognition system identified human shots and flower shots adjusting its settings automatically.

A village near Upper Kachura Lake also caught Tapu’s wild imagination. Its trees dyed in hues of autumn created an ethereal aura that looked right out of a dream. Hopped on a cycle, Mahi had an angelic glow that HUAWEI Mate 10 Pro’s camera masterfully encapsulated. The camera’s AI-powered Bokeh Effect created brilliant portraits – no less than a DSLR.

Not only was Tapu spellbound by the landscape, but was also drawn to the warmth of Skardu’s people. While a group of friends bonded over tea, Tapu memorialized the moment in exquisite monochrome portraits taken through the 20-megapixel Monochrome sensor. The HUAWEI Mate 10 Pro also took some classic bokeh shots that added a unique candidness to the gathering.

As night fell on the Lower Kachura Lake and an eerie silence fell over the valley, Tapu indulged himself into another photographic experience. With the HUAWEI Mate 10 Pro’s wide aperture of f/1.6, he embalmed a low-lit shot of the lake, as it reflected a shimmering moon on its tranquil surface.

The Ufone Football Cup has gotten a major excitement boost as the KP leg of the tournament also kick started on Monday. Over 2 thousand ... Read More