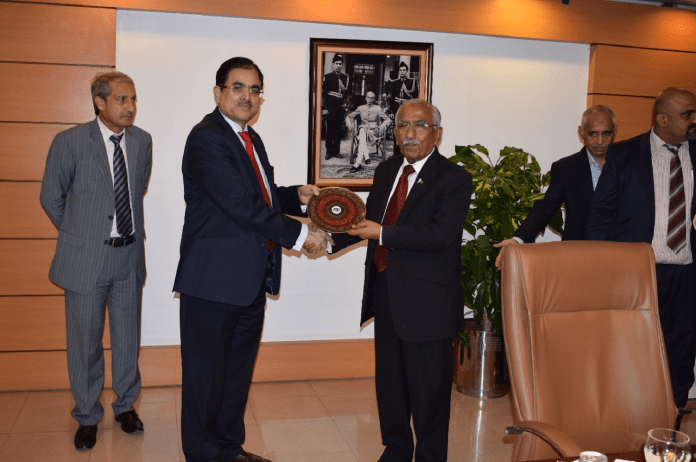 MD NTC Brig (Retd) Viqar Rashid Khan enlightened the audience of the major achievements made by NTC during the past five years. While commenting on the performance, MD said: NTC is the first Public Sector Telecom operator to establish the Cloud based Tier-III National Data Center. NTC completed 99% of Annual Development Plan of F.Y. 2016-17, beating all previous records. Through fast pace of development works, 159% growth in its network and infrastructure has been achieved. After establishment of International Gateway in 2015, NTC has earned over 14.30 Million Foreign exchange. NTC has witnessed unprecedented financial growth of over 92% in broadband connections. NTC is the first telecom operator in Pakistan which has recently introduced “NTC Go Smart App”, Machine to Machine (M2M) and Point 2 Point (P2P) technologies under Public Private Partnership. Due to continuous efforts of the Management and NTC employees, the Corporation has now become profitable entity and has achieved a financial turnaround.

The Minister praised NTC performance and congratulated the NTC Management, for phenomenal development of IT & Telecom facilities to Public Sector with State of the art technologies. The Minister said that NTC is a key stakeholder in Pakistan’s breathtaking pace of digital transformation especially in Government Sector. He assured that he will record a special note for next Government to fully support the employees and Corporation’s interest. MD NTC thanked Minister for reposing his trust in NTC. Minister expressed his satisfaction and lauded over the achievements made by NTC and hoped that NTC will strive to provide good quality services from its platform to NTC Valued Customers. Speaking on the occasion MD NTC expressed that NTC will continue to serve the Government and Public Sector through reliable and secure telecom infrastructure to safeguard against cyber threats. NTC is committed to achieve Digital Pakistan – a vision of Government of Pakistan.

JazzCash to Offer a One-Touch Solution for Ticket Purchaseat Cinepax