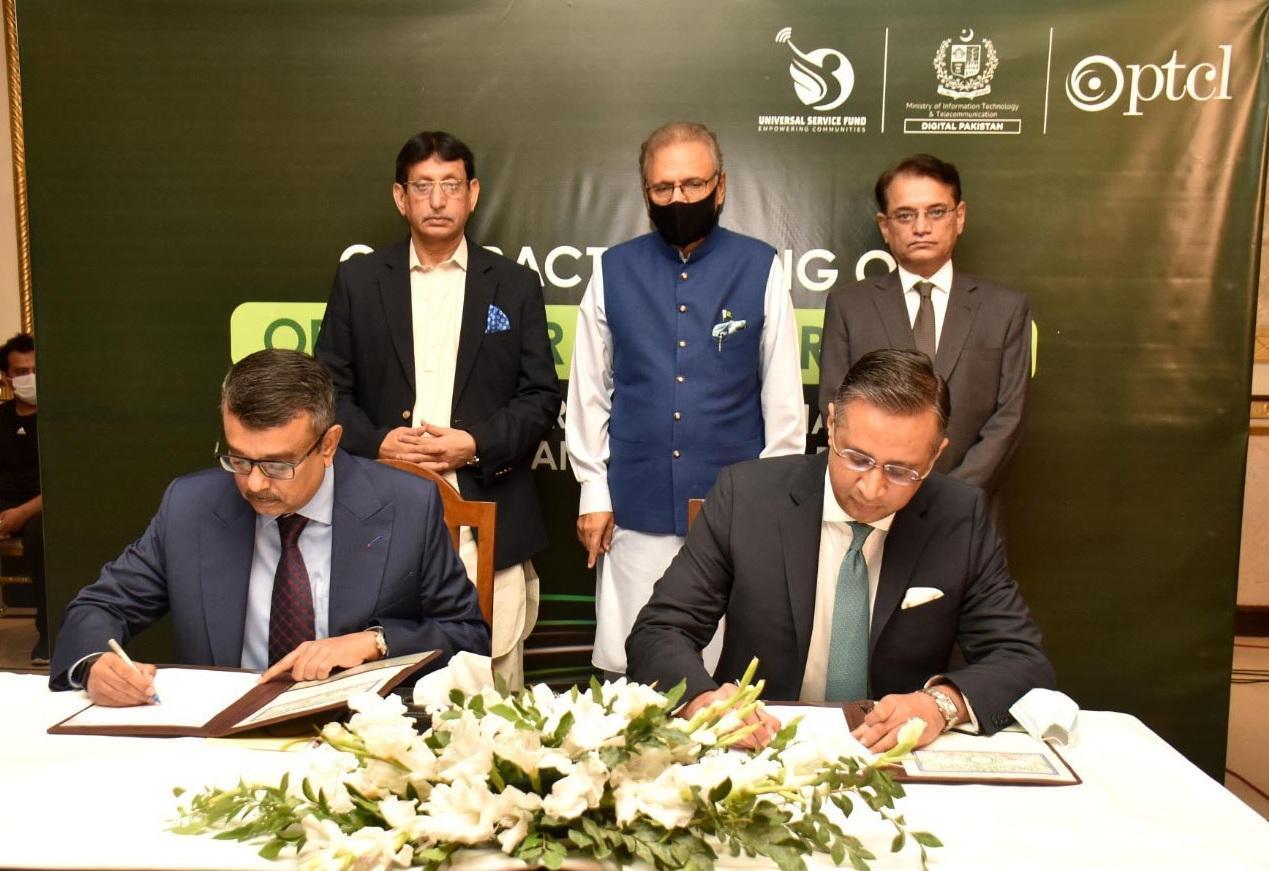 MoITT through USF) initiated OFC projects worth PKR 2.1 billion in 3 districts of Sindh

Ministry of Information Technology and Telecommunication (MoITT) through Universal Service Fund (USF) has initiated projects worth PKR 2.1 billion in three districts of Sindh, Benazirabad, Naushahro Feroz and Khairpur whereby optical fiber cable will be laid down. A signing ceremony was held to mark the agreement of these projects in Karachi on Monday, July 12, 2021. Honorable President of Pakistan, Dr. Arif Alvi was the chief guest at the ceremony. Federal Minister for IT and Telecommunication, Syed Amin Ul Haque and Federal Secretary IT, Dr. Sohail Rajput graced the occasion. USF’s CEO, Haaris Mahmood Chaudhary and PTCL’s Acting CEO andGroup Chief Financial Officer (GCFO), Nadeem Khan signed the agreement.

While addressing the ceremony, President of Pakistan, DrArif Alvi stated that it is necessary to keep up with the changing times and embracing technological developments taking place globally. He further mentioned that the Prime Minister’s vision of Digital Pakistan aspires that Pakistan meets the international standards of technological advancement and progress. He said that the role of Ministry of IT and Telecommunication must be applauded as they are striving hard to ensure to materialize the vision of Digital Pakistan. The President congratulated the Minister of IT and Telecommunication and said that the IT sector can play a critical role in providing employment to millions of Pakistanis and contributing towards the economic progress of the country. He also shared that the MoITT is performing well but there is a long way to go.

Addressing the occasion, The Federal Minister of IT and Telecommunication said that during the last 3 years the Ministry has worked on 9 different projects worth PKR 8.48 billion entailing the provision of mobile broadband services and laid down fiber optical network in Sindh.Through this, 3,227 muazas from 26 districts and 230 union councils via 1900 km of fiber optic cable has helped connect a population of 17.5 million to the digital world.On the occasion, Federal Minister for IT and Telecommunication, Syed Amin Ul Haquecriticized the performance of the Sindh government and said that our projects are an example of our relentless commitment to the wellbeing of our nation and to the population of Sindh. He further stated that for the past 13 years the Sindh government has been causing grief to the population and have not served them well. Mr. Amin Ul Haque said, ‘I was selected from Karachi but I aim to serve the entire population of Sindh. The Sindh government has siphoned PKR 1,800 billion and not delivered a single development project.

Mere accusations will not compensate for the lack of performance and development and very soon Sindh government will meet its fate and be shown the door. In this digital era, the populace is able to differentiate between delivery and mere lip service. The urban population is well aware of the ill intentions harbored by the Sindh government and very soon, those in remote villages will be able to realize that too.The people of Sindh will not listen to the noise being generated by the government or the accusations they level. The talk of a Northern Sindh province has now emerged. This is the demand of the marginalized and suppressed Sindhi populace. The growth and progress of Sindh is only possible through the division of administrative units. While the rest of world lives in the 21st century, the people of Sindh have been suffering and still live in the era of Before Christ.

Expressing his views during the ceremony, Universal Service Fund, Chief Executive Officer, Haaris Mahmood Chaudhary in his welcoming speech said “I am happy to share that, we have also expanded our fiber optical cable project to the level of Union Councils on the direction of our Federal Minister of IT and Telecommunication. Today, as we speak, this project is a part of the entire program”. He added that this project worth PKR 2.1 billion has been awarded to PTCL in recognition of their efforts of connecting millions of people across Pakistan. Under this project, a total of 101 towns and Union Councils will be connected through 709.5 km of optic fiber cable, benefiting a population of 2.8 million residents of these areas enabling the communities and ecosystem, on a broader scale, this project will ensure economic prosperity, social inclusiveness, and general networking between communities.

On the occasion, Nadeem Khan, Acting CEO & GCFO, PTCL &Ufone, said, “PTCL, being the backbone of connectivity in Pakistan, continues to serve the country’s communication needs nationwide. Our continued collaborations with USF have played a key role in ensuring that we reach far-flung rural areas to provide services to underserved communities. We are glad to extend our Optic Fiber network to even more districts in Sindh including Naushahro Feroze, Shaheed Benazirabad and Khairpur. With our aim to turn Digital Pakistan into a reality, we are committed to play our role as a national carrier to support the progress of the country by empowering our communities socially and economically.”