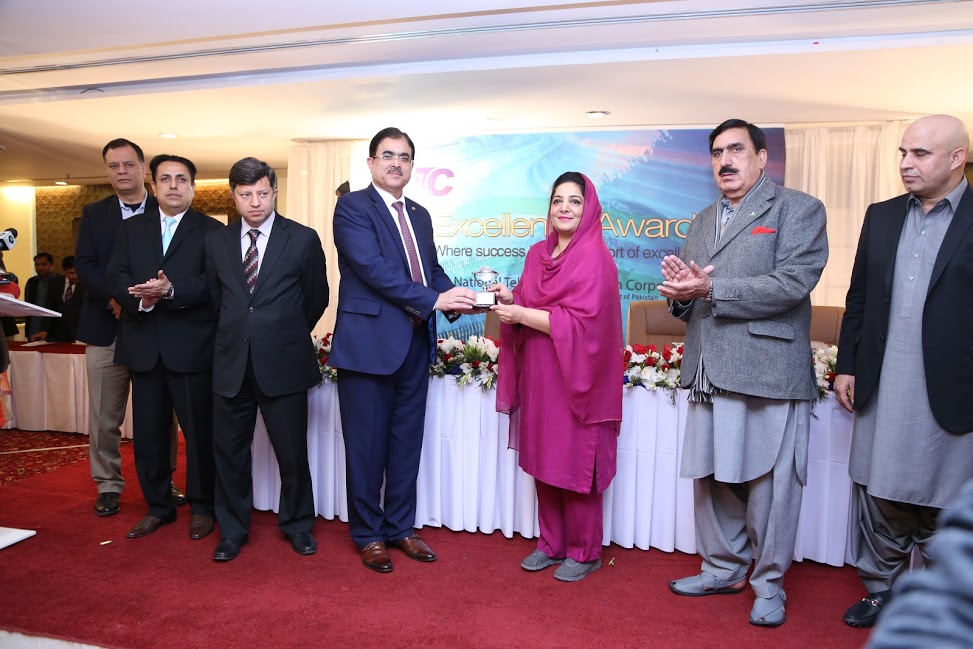 In recognition of valuable services and outstanding achievements of NTC officials, National Telecommunication Corporation arranged NTC Excellence award ceremony here in Islamabad today. Minister of State for IT & Telecom Mrs. Anusha Rahman was the chief guest. Top representatives from the Government including top officials from Ministry of IT & Telecom as well as executives from IT & Telecom industry, the business sector, professionals, Chairman Senate Standing Committee on MoITT were also present at the occasion. Managing Director NTC, Brig (Retd) Viqar Rashid Khan in his inaugural address, warmly welcomed the guests and thanked Chief Guest, Minister for Information Technology, Mrs. Anusha Rahman for her generous support and visionary leadership which reinvigorated the whole ICT sector. Speaking on the occasion, MD NTC said, “Excellence awards are designed to recognize members of NTC family whose initiatives and efforts immensely contributed towards the achievement of NTC’s business results and overall success. MD NTC shared that over the last three years as per the vision of Honorable Prime Minister, under the able guidance of MoS for IT, Mrs. Anusha Rahman, NTC has made significant progress in providing the state of art Telecom /ICT services in Public Sector.  Due to continuous efforts of the Management and NTC employees, the corporation after three years now becomes profitable entity and has achieved a financial turnaround and has become a beacon of light for other Public Sector Corporations. MD NTC briefed the audience that NTC is the first operator to establish the Cloud Based Tier-III National Data Center in the Public sector. During the last three years, NTC has carried out massive technical growth to extend latest Telecom /ICT services to its valued customers. During current F.Y. 2016-17, NTC is going to complete 100% of its ADP projects in time which will be a record in Public Sector. NTC has extended its services from 54 districts/cities to 87 districts / cities. Overall Fixed Lines telephone growth observed was 6% despite of decline in its general use with growth of over 36% in Broadband. NTC is the first telecom operator in Pakistan which has recently introduced “NTC Go Smart App”, Machine to Machine (M2M) and Point 2 Point (P2P) technologies under Public Private Partnership.Mrs. Anusha Rahman congratulated the services of NTC and the Ministry’s officials which they rendered selflessly, for phenomenal development of IT & Telecom sector of Pakistan during last three years. While speaking at the occasion, the Minister said that we are rigorously pursuing the Prime Minister’s vision of “Digital Pakistan”. We believe in ubiquitous ICT development throughout the country.  Therefore we are connecting the unconnected. While sharing some key achievements of the Ministry IT, she said that Ministry of IT has achieved remarkable performance during the last three years, which was recognized not only within Pakistan, but also got worldwide. She said that resolution in favor of Pakistan registry by ICAAN is a landmark achievement of the Ministry and the country. She further said that in 2015, after due deliberation, we decided to designate this endeavor to NTC and request was sent to ICAAN for further consideration. ICAAN took almost one year to assess and evaluate and eventually acceded to our request. Now I hope that NTC will carry out its responsibility with utmost professionalism to host Pakistan Domain.Anusha Rahman further stated that our Government has always worked in collaboration and MoIT always worked hand in hand with private sector to materialize our goal of “Accelerated Digitization”.She said that due to our collective approach, we successfully established first state of the art “National Incubation Centre” which has started nurturing the start-up / young entrepreneurs while four more such Incubation centers in all provincial capitals are also in the offing. Moreover, three specialized Incubation centers for Internet of Things (IoT), Robotics and Fin-Tech are also being established.Minister also shared that Vice President of Korean EXIM Bank is visiting Pakistan next week to sign a loan agreement for establishment of first state of the art Technology Park so that construction of the Park could get started. She further stated that Ministry IT is going to establish Computer Labs in 107 Rural Girls Schools of Islamabad Capital Territory where young girls will be able to learn latest technical / computing skills from their early childhood and the USF has committed to complete this project by the end of summer this year.Mrs.Anusha Rahman said that our dream to connect whole Pakistan is turning into a reality now. We are going to announce Kohistan Lot by next week, where people of these areas will not only be provided with the Fiber Optic but also availability of 3G services will be ensured by the end of 2018, Insha Allah. At the end MoS for IT, Mrs. Anusha Rahman distributed awards to NTC staff and appreciated their best performance.