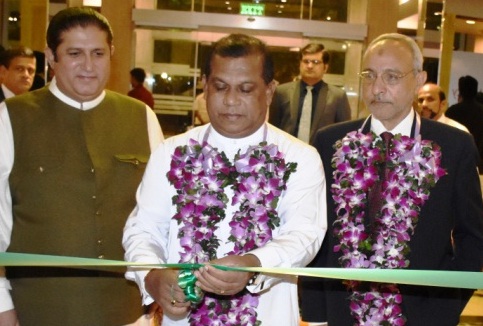 Feel the real taste of Pakistan’s strength, diversity and culture through its exotic cuisine. A fact highlighted by several prominent figures at the opening of a five-day Pakistan Food Festival (11-15 January, 2017) at Galadari Hotel last evening.Pakistan Food Festival was formally inaugurated by the Minister for Public Administration and Management, Hon. Ranjith Madduma Bandara and the High Commissioner of Pakistan in Sri Lanka Maj. Gen. (R) Syed Shakeel Hussain by cutting the ribbon in a simple yet traditional ceremony. The opening ceremony was attended by the people from different walks of life including diplomats, Sri Lankan Parliamentarians, government functionaries, members of Pakistani community in Sri Lanka and prominent personalities.Invitees of the event were of the view that festivals of this nature are a good medium to bring people closer to each other and further strengthen the strong brotherly relations between Pakistan and Sri Lanka.During the event, the High Commissioner of Pakistan Maj. Gen. (R) Syed Shakeel Hussain said that Pakistani cuisine is a kaleidoscope fusion of culture which showcases the abundance and diversity of Pakistan’s food products. Within Pakistan, cuisine varies greatly from region to region, reflecting the country’s ethnic and cultural diversity, he added.The Pakistan Food Festival is a part of Pakistan Single Country Exhibition 2017 which will be held at BMICH, Colombo from 13-15 January, 2017 for the second consecutive year.The Pakistan Single Country Exhibition organized by the Trade Development Authority of Pakistan (TDAP) in collaboration with High Commission of Pakistan in Sri Lanka will be featuring leading Pakistani companies and manufacturers of Engineering Products, Auto Parts, Agro Products, Textile & Clothing, Designer Wear, Handicraft, Pharmaceuticals, Cutlery, Furniture, Carpets, Marble and Services.

MCB Bank, one of Pakistan’s largest & most innovative banks, has entered into an agreement with leading Saudi financial institution Bank Al Jazira (Fawri) for ... Read More