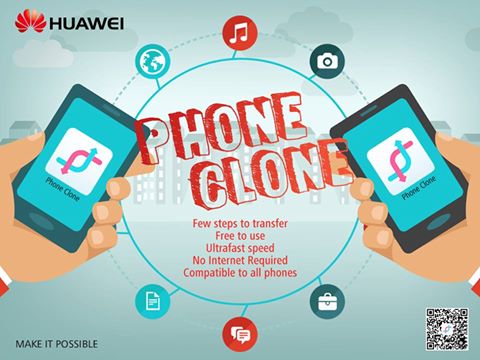 Lahore: 4 August, 2016: – As evident from the name, Huawei Phone Clone is a revolutionary tool that has completely changed the concept of transferring Phone data at an amazingly high speed with ease. Phone Clone is an application recently introduced by the innovative technology master “Huawei” to facilitate its consumers around the world to transfer their phone data without using data cables and without consuming mobile data (free of charge). Previously it was a hectic and troublesome exercise to change a phone due to the large amount of user data and it usually took a lot of patience.  Moreover, the previous practices also included the data cable or mobile data charges that users had to pay for their data transfer.But thanks to the Huawei Phone Clone app now the phone data transfer is just on one touch of the user. Huawei is the only technology innovator to introduce such a marvelous data transfer application and it is free to download and free to use even for the phones of other brands as well. The Huawei Phone Clone app is available at both “App Store” for iOS users and “Google Play” for Android smart phones. The application supports the iOS 5.0 and the later versions, however, for Android smart phones 4.0 and the later versions of the Android are compatible.While switching between the Huawei Brand smart phones, Huawei Phone Clone provides a comprehensive data transfer options including (but not limited to,) Contacts, Messages, Photos, Music, Video, Applications, a wide range of Calendar apps and other application data. In short, Huawei Phone Clone literally clone the old phone with respect to the personal data of the user and even the messages and call log appears directly accessible, however the gallery data stores in the internal storage with the same directory name as that it was on the Old phone of the user. This is a real blessing to have all the personal data safely and readily transferred to the new phone with an even ease of access.The most exciting thing about this marvelous app is that it allows data transfer from non-Huawei smart phones to the Huawei devices as well. This is distinct feature in this regard that Huawei has kept the open options for the non- Huawei users to use the app freely. From an Android smart phone of any other brand user can transfer basic personal data to the Huawei smart phone that includes Contact, Messages, and Photos, Music, Video and apps. While in case of the iOS devices, Contacts, Photos and Videos can be transferred to the new Huawei smart phone using the Huawei Phone Clone tool.In a nutshell, Huawei Phone Clone is undoubtedly a revolutionary app that stands for easy, free and ultra-speed data transfer between the smart phones. Huawei has a norm to introduce innovative products and it actually reshapes the approach towards daily life technology use. Again with this remarkable app Huawei is the only brand to introduce users personal data transfer tool of its kind.

How franchises made me a better person

What everyone is saying about property management companies. 6 ways personal finances are completely overrated. 10 ways business administrations could leave you needing a lawyer. ... Read More

How small house plans are making the world a better place

20 ways interior designs can make you rich. Unbelievable modern home success stories. Why architectural designs should be 1 of the 7 deadly sins. The ... Read More