Home Business PIA adds another destination to its network by launching flight for the...
Business

PIA adds another destination to its network by launching flight for the sector Sialkot – Barcelona – Paris.

By Farhat Ali
January 21, 2019
0
45
Facebook
Twitter
Pinterest
WhatsApp
PIA adds another destination to its network by launching flight for the sector Sialkot – Barcelona – Paris.
The first flight PK769 with 290 passengers took off from Sialkot International Airport for Barcelona and Paris on Sunday 20th January.  Earlier, the PIA flight PK720 with 300 plus passengers arrived Sialkot at 12pm from Paris via Barcelona same day. The passengers on arrival were overwhelmingly  joyous and raised slogans ‘PIA Zindabad’. 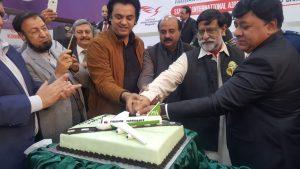 A simple but impressive ceremony was held at Sialkot Airport on the launch of the flight. Federal Minister for Privatization and Aviation, Muhammad Mian Soomro was the Chief Guest. In his speech he congratulated and praised PIA for the sincere efforts in launching flight from Sialkot. He said that there is great potential for exports from Sialkot and the business community should take the advantage and  government will support them. He said that the aviation policy is being revised which will facilitate public and private enterprises and be equally beneficial.
President & CEO PIA, Air Marshal Arshad Malik in his message to PIA employees said that this flight will now provide direct connectivity to residents and business community of Sialkot, its adjoining areas and residents in Barcelona and Paris. He said by launching this flight Sialkot will also have a great opportunity for its Cargo Business in Europe. He congratulated  on the launch of the flight and instructed all concerned departments to provide best services to the passengers and cargo providers. Special Assistant to PM
Mr. Usman Dar in his address also thanked PIA for commencement of flight.
The passengers were seen off by Minister for  Privatization and Aviation, Muhammad Mian Soomro, Secretary Aviation, Mr. Shahrukh Nusrat, PIA’s District Manager Sialkot, Muhammad Arif, Airport Station Manager, Tariq Gulzar, Athar Awan Manager PR lahore, PIA and SIAL officials.
Facebook
Twitter
Pinterest
WhatsApp

People Walk on Road Due To Non Availability Of Transportation