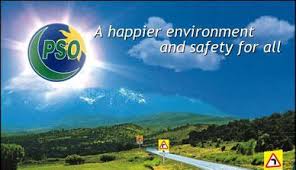 Karachi- November 28, 2016:  Pakistan State Oil has repudiated the news circulating in some sections of the media fomenting speculations about shortage of fuel in the country. Pakistan State Oil (PSO) has clarified that there isno imminent shortage of fuel in the country as PSO has ample fuel reserves in its stocksand it’s being dispensed off as usual at all PSO retail outlets across Pakistan.Followed by a recent incident at KPT terminal in which a PHI chemical tank caught fire, KPT temporarily disallowed unloading of all fuel cargoes causing rumors about possible disruption of fuel supply and the subsequent fuel shortage in the country. However, after the fire was put out, all cargoes were immediately allowed to berth and unload and the fuel supply resumed as usual.Pakistan State Oil has furtherinformed that the company had evenmade arrangements to procure fuel from local refineries to ensure seamless fuel supplyin case the unloading of cargoes would have delayed any further.PSO has reiterated its commitment that the company is working relentlessly to ensure availability of fuel at all times in the country. The demand and supply cycle of fuel is closely scrutinized and act preemptively to ensure seamless supply of fuel in the country. Being Pakistan’s flagship oil marketing company and a responsible corporate citizen, Pakistan State Oil is fully aware of its national duty and will put maximum effort to keep the country adequately fuelled.

Daraz and HBL team up to announce HBL Wednesdays!

Following years of smartphones becoming bigger, Apple has once again gone in the opposite direction, unveiling a smaller iPhone. The iPhone 13 Mini retails for $699. ... Read More