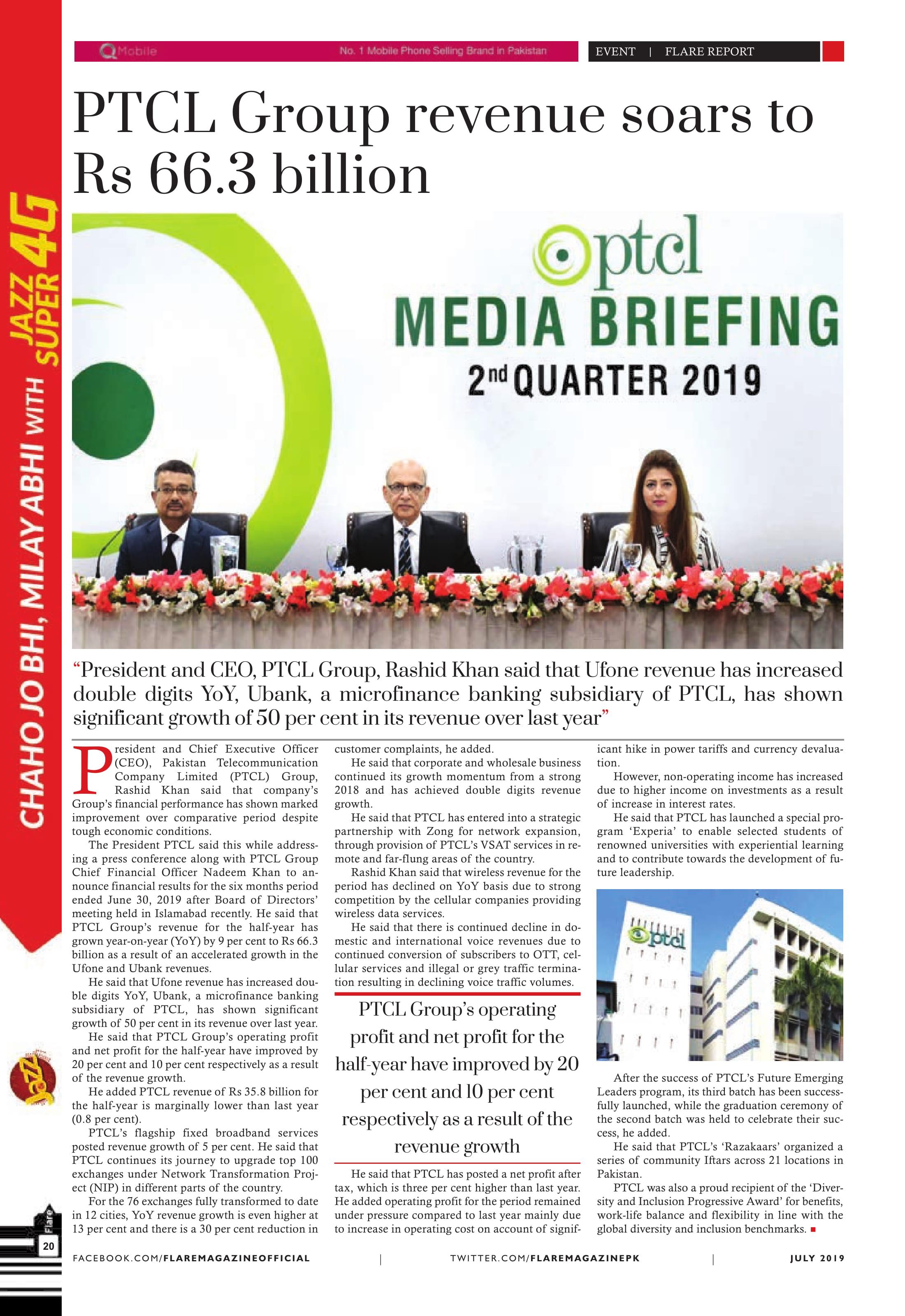 respectively as a result of the revenue growth

The President PTCL said this while addressing a press conference along with PTCL Group Chief Financial Officer Nadeem Khan to announce financial results for the six months period ended June 30, 2019 after Board of Directors’ meeting held in Islamabad recently. He said that PTCL Group’s revenue for the half-year has grown year-on-year (YoY) by 9 per cent to Rs 66.3 billion as a result of an accelerated growth in the Ufone and Ubank revenues.

He said that Ufone revenue has increased double digits YoY, Ubank, a microfinance banking subsidiary of PTCL, has shown significant growth of 50 per cent in its revenue over last year.

He said that PTCL Group’s operating profit and net profit for the half-year have improved by 20 per cent and 10 per cent respectively as a result of the revenue growth.

He added PTCL revenue of Rs 35.8 billion for the half-year is marginally lower than last year (0.8 per cent).

PTCL’s flagship fixed broadband services posted revenue growth of 5 per cent. He said that PTCL continues its journey to upgrade top 100 exchanges under Network Transformation Project (NIP) in different parts of the country.

For the 76 exchanges fully transformed to date in 12 cities, YoY revenue growth is even higher at 13 per cent and there is a 30 per cent reduction in customer complaints, he added.

He said that corporate and wholesale business continued its growth momentum from a strong 2018 and has achieved double digits revenue growth.

He said that PTCL has entered into a strategic partnership with Zong for network expansion, through provision of PTCL’s VSAT services in remote and far-flung areas of the country.

Rashid Khan said that wireless revenue for the period has declined on YoY basis due to strong competition by the cellular companies providing wireless data services.

He said that there is continued decline in domestic and international voice revenues due to continued conversion of subscribers to OTT, cellular services and illegal or grey traffic termination resulting in declining voice traffic volumes.

He said that PTCL has posted a net profit after tax, which is three per cent higher than last year. He added operating profit for the period remained under pressure compared to last year mainly due to increase in operating cost on account of significant hike in power tariffs and currency devaluation.

However, non-operating income has increased due to higher income on investments as a result of increase in interest rates.

He said that PTCL has launched a special program ‘Experia’ to enable selected students of renowned universities with experiential learning and to contribute towards the development of future leadership.

After the success of PTCL’s Future Emerging Leaders program, its third batch has been successfully launched, while the graduation ceremony of the second batch was held to celebrate their success, he added.

He said that PTCL’s ‘Razakaars’ organized a series of community Iftars across 21 locations in Pakistan.

PTCL was also a proud recipient of the ‘Diversity and Inclusion Progressive Award’ for benefits, work-life balance and flexibility in line with the global diversity and inclusion benchmarks. 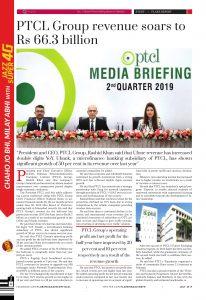 New CEOs Announced  for Ufone, PTCL In 2016 Etisalat has endorsed the arrangement of new CEOs for its cell and landline arms in Pakistan, just ... Read More