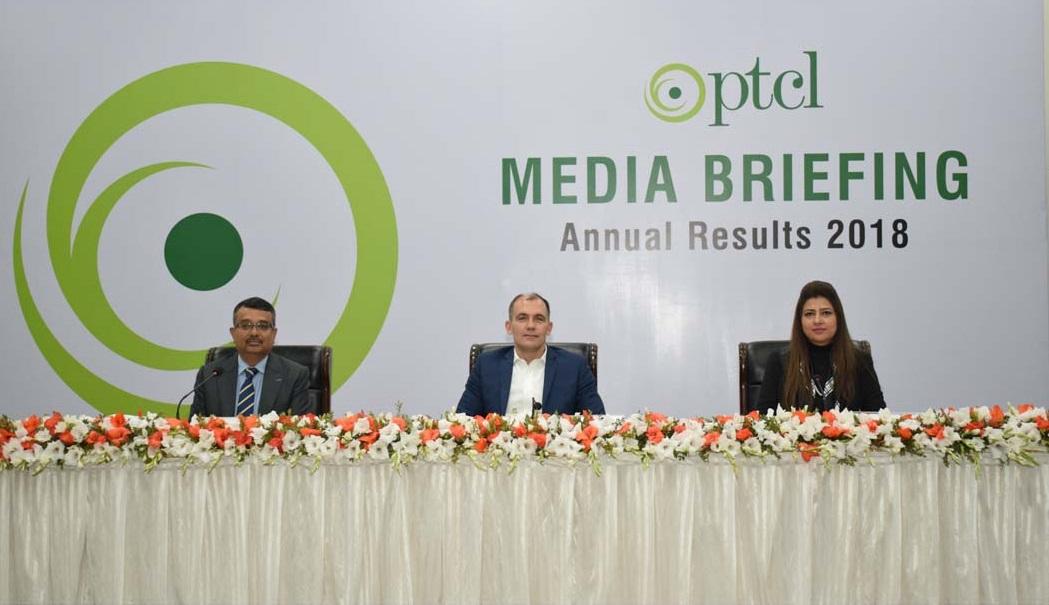 Pakistan Telecommunication Company Limited (PTCL), the country’s leading telecom and ICT services provider, has announced its financial results for the year ended December 31, 2018, at its Board of Directors’ meeting, held in Islamabad on February 12, 2019. 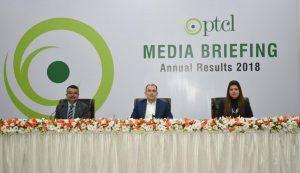 PTCL Group’s revenue for the year2018 has grown YoY by 8% to Rs.126.2 billion as a result of positive contribution by all group companies. PTCL Group’s revenue growth in the fourth quarter accelerated to13%YoY. Ufone revenue has increased by 13% YoY, UBank, a microfinance banking subsidiary of PTCL, has shown significant growth of 64% in its revenue over last year. PTCL Group’s operating profit and net profit for the year have improved by 198% and 32% respectively. Like-for-like, net profit of PTCL Group is higher by 22% compared to last year.

In 2018, three quarters of PTCL’s revenue base has shown a growth over last year. PTCL’s flagship Fixed Broadband services posted revenue growth of 6.5% over 2017. For the 51exchanges fully transformed to date under the network transformation program YoY revenue growth is even higher at 12.4%. Investment in transformation of network exchanges has resulted in enhancing customer experience by reducing network faults by 36% and repeat faults by 50%, along with providing higher bandwidths beyond 100Mbps, bundled with Triple Play services. To further enrich the product and services portfolio, PTCL has partnered with the global OTT players like Netflix, STARZ Play, iflix, etc. PTCL has also been recognized by Brand Finance as the ‘Fastest Growing Brand in Pakistan’.

Corporate business continues to perform strongly and has shown significant growth of 13% over last year by signing new customers in Managed Services and Cloud Infrastructure Services resulting in 154% and 188% growth respectively in these two segments.

Conversion of EVO customers to Charji/ LTE have yielded positive results with YoY revenue growth in double digits, however, it has also resulted in higher subscriber acquisition cost as compared to last year. There is continued decline in domestic and international voice revenues due to increase in illegal/grey traffic termination, continued conversion of subscribers to OTT and cellular services, resulting in declining voice traffic volumes.

In 2018, the financial strength of PTCL was acknowledged through an independent rating exercise as a result of which JCR-VIS has assigned PTCL a long-term rating of AAA which will enhance all stakeholders’ confidence in the long-term sustainability of the Company.

This year yet again, PTCL has inducted top 100 young engineers and business graduates under Summit Program 2018 from top institutions and universities across Pakistan, which would help in building future leadership. Thanks to its sustained high growth, Ubank has created more than 650 new positions during 2018, increasing its employee base from 1,321 to 1,980, where 9% of the total workforce comprises of women.

The CEO of PTCL, Dr. Daniel Ritz, has decided to leave PTCL for personal reasons upon completion of his 3-year contract on March 1, 2019, in order to re-unite with his family in Europe. The PTCL Board of Directors at its meeting today has appointed Rashid Khan, currently CEO of Ufone, to the post of CEO PTCL effective March 2, 2019, with an additional charge of CEO Ufone.

On the occasion, Dr. Ritz said, “It has been a privilege and an honor to lead PTCL and the PTCL Group through a period of significant transformation. I am proud of what we have achieved as a team and the results announced today with PTCL returning to top line growth for the first time after several years of revenue decline are a testimony to this.” The PTCL Board of Directors thanked Dr. Ritz for his exemplary leadership in the past three years and the associated business results. His decision to return to Europe to re-unite with his family is understandable.

Hatem Dowidar, CEO Etisalat International, commented, “Daniel has taken the helm of the company at a critical time where he has succeeded in laying the foundation for a future network, providing ultra-fast broadband to many areas with the biggest network modernization of PTCL in its history. Additionally, PTCL under his leadership, became active in Cloud computing, data centres and pushing forward the Digital Pakistan agenda”. Maroof Azfal, Chairman PTCL, added, “On behalf of Government of Pakistan, I would like to thank Daniel sincerely for his personal leadership and achievements in putting PTCL, an important national asset, back on the growth track.”

During the pre-order phase, HUAWEI Y7 Prime 2019 overbooked more than its predecessor opening the new year on a bestselling note. Huawei has begun selling ... Read More

realme 3 earned a high rating of 5 on Daraz.com

realme sold 1000 units of realme 3 in 10 minutes and is gearing up for Second Sale Fastest seller realme 3 up for round 2 ... Read More