Home Offers Renewable Energy share to be increased to 30% till year 2030: Omar...
Offers

Federal Minister for Power, Mr. Omar Ayub Khan has said that Power Division is working on renewable energy policy to harness immense potential in solar, wind and hydel resources, existing in Pakistan and in this regard is considering to increase the share of renewable energy in the overall energy mix to 20% till year 2025 from the existing 4% and to 30% till year 2030 to attract maximum investment. 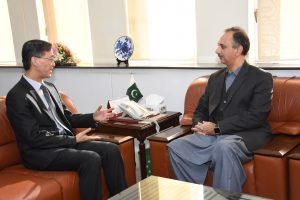 Federal Minister for Power stated this during his meeting with Chinese Ambassador HE. Mr. Yao Jing who met him at his office today. Secretary Power Mr. Irfan Ali was also present in the meeting.

The Federal Minister while acknowledging the important position of CPEC energy projects said that these are symbol of deep rooted relations between the two countries based on mutual respect. He said that these relations are further strengthening with each passing day. He said that Power Division is extending all out support to the Chinese and other  investors in the power sector and their various issues are being resolved on priority basis. 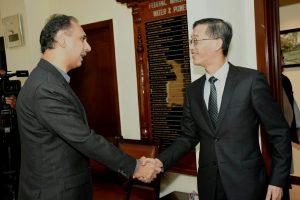 While talking about huge investment potential in the solar panel market, smart meters and other distribution and transmission system equipment including anti fog insulators in Pakistan, the Federal Minister said that Chinese investors can take full benefit of these opportunities.

The Chinese Ambassador while reiterating China’s commitment to further boost the existing ties between the two countries said that Power Sector has been the prime and most important areas of CPEC. He said that Chinese investors are closely following Pakistan’s power sector policies and are keen to invest in the renewable energy.

Federal Minister for Power also apprised the Chinese Ambassador on the current anti-theft campaign by the Power Division which is gaining very good results. He also briefed him regarding initiation of Smart Meters projects in various Distribution Companies and invited the Chinese investors for manufacturing the same in Pakistan.

OPPO is well-known for its smartphones but recently it has taken a shift by launching smart devices to help users live more intelligent lives....
Read more
Offers

TCL, Pakistan’s No.1 TV brand, has again announced its partnership with Daraz for  Jashn-e-Azadi Sale that will last from 7th August – 14th August...
Read more

World envoys happy to see Pakistan achievements since its establishment