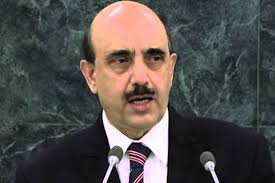 Lahore: July 7, 2018 – Sardar Masood Khan, President of Azad Jammu and Kashmir who is visiting Toronto at the invitation of the Consulate General of Pakistan, Toronto and the Kashmir Committee, Canada, urged the Canadian Senate, House of Commons and Ontario Legislative Assembly to raise and discuss the Kashmir issue and send a fact-finding mission to both Indian Occupied Kashmir and Azad Kashmir to help find a solution of the long-standing dispute of Kashmir and ascertain horrendous human rights situation in IOK. 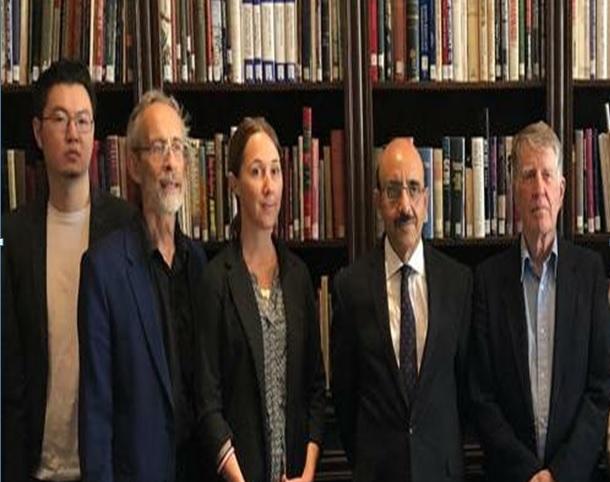 The President of Azad Kashmir made this appeal while addressing members of the prestigious Canadian International Council (CIC), whose President, Fraser Mann, presided over the session. Mr. Imran Ahmed Siddiqui, the Pakistan Consul General, also attended the event.

While thanking the Council for holding an exclusive session on Kashmir, the President invited Council members to visit Azad Kashmir and see for themselves the AJK Government’s endeavours to promote human rights, the rule of law, access to justice and accountability; as well as to foster human development by investing heavily in road infrastructure, power generation, industrial growth, agriculture, health and quality education.

Sardar Masood Khan thanked Canada for its contribution to the decision making on Kashmir in the Security Council, in the very early phase, and its support to and participation in the United Nations Military Observer Group in India and Pakistan (UNMOGIP).

The President told his audience how the international community at long last has broken its silence on the massive, gross and consistent human rights violations in the Indian Occupied Kashmir. He drew the attention of the Canadian Council to the report on the situation of human rights in IOK released recently in Geneva by the Office of the High Commissioner for Human Rights, which meticulously chronicles evidence of a rampant culture of impunity and denial of access to justice in IOK, as well as brutalisation of Kashmiris through killings, excessive use of force, mass blinding of protesters or bystanders, torture, enforced disappearances and sexual violence.

The AJK President informed his audience that the All Parties Parliamentary Kashmir Group (APPKG) in the British Parliament would soon release a report to substantiate how India’s two notorious draconian laws – the Armed Forces Special Powers Act and the Public Security Act – had given a license to kill unarmed Kashmiris and shield the perpetrators of these crimes from legal scrutiny, prosecution and punishments. These laws, he said, permit state authorities to arbitrarily detain persons without charge or judicial review for up to two years without telling the detainee what his crime is or giving him family visitation rights. The occupation forces, he said, use deadly force to kill people in brutal cordon and search operations or arrest them on suspicion of having committed a crime or on the suspicions of “… is about to commit a crime”.

“These laws must be rescinded forthwith”, the President said and appealed that the international community should put pressure on India to abide by the rules of proportionality, distinction and precaution, stop committing war crimes and targeting unarmed non-combatants. The President also demanded that India should be asked to allow independent and impartial international investigations into unmarked mass graves to determine the identity of the victims of India’s state terrorism. Similarly, instances of sexual violence should be independently investigated and prosecuted.

The President said that the basic rights of the Kashmiris and their fundamental freedoms should be restored by lifting restrictions on the Internet, mobile phones, newspapers and journalists. President Masood Khan denounced India’s practice of constantly keeping the leaders of Joint Resistance Leadership – Syed Ali Gilani, Mirwaiz Umer Farooq and Yasin Malik – under detention. “These true and faithful representatives of Kashmir must be released”.

The President said that the root cause of the human rights crisis in Kashmir is the denial of the right to self-determination to the people of Jammu and Kashmir and India’s refusal to resolve the Kashmir dispute through dialogue and diplomacy, as demanded by the people of Kashmir and Pakistan. India, he said, wants to resolve the issue through the use of state terrorism and brute force but it would never succeed in that mission.

When asked about the best methodology to resolve the issue, the President responded: “Let’s put the Kashmir dispute on the table and set up peace tables in Islamabad, Delhi, Srinagar, Muzaffarabad and New York. Let the will of the Kashmiri people prevail. Let them decide their political future in accordance with a dispensation spelt out by the United Nations. Let’s banish violence in the region. But first and foremost, let’s put an end to India’s repression in Kashmir. That should be the starting point.”

Replying to a series of questions by an ex Indian army officer, who also attended the event, the President said Kashmiri Pandits can come back and settle in Kashmir and Muslim population would welcome them in their midst. The President categorically said that according to the Indian security officials no infiltration was taking place across the Line of Control from the Azad Kashmir side; the movement in Kashmir was indigenous.

One of the Indian participants among audience said that UNMOGIP was not functioning and its members went merely for sight-seeing in Srinagar. The President said that on the Pakistan/Kashmiri side, the mission was functional and was fully supported by the Pakistan Government; and asked the Indian side to do the same and not try to sabotage and scuttle this UN mission, which is mandated to monitor the ceasefire along the Line of Control.

Vendor Preparing Ice Lolly For A Student Outside A School

A Beautiful View Of Lahore Fort Seen From Badshahi Masjid