“This agreement between two would effectively prove a solution for automating the entire campus managing all operations related to educational setup as per International Standards,” Minister IT & Telecom Syed Amin Ul Haque made these remarks at a signing agreement between Khazana Enterprise and Computer Research Private Limited for Academic ERP (eDU SMARTZ). 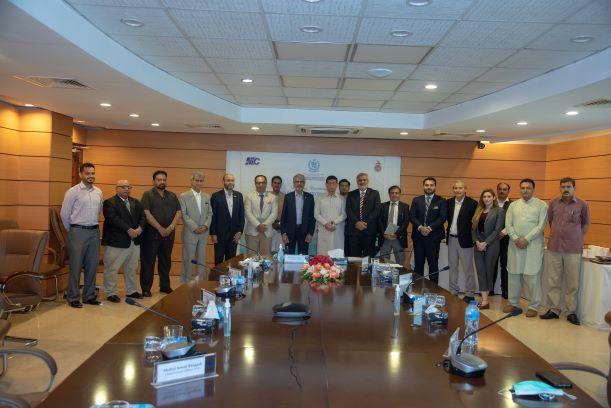 According to the details, NTC, Khazana & CRPL have entered into this Digital Services Solution Agreement under Public Private Partnership (PPP), where NTC will provide the platform through its deployed Infrastructure and locally hosted software / Application developed by CRPL. This would ensure integrity of the data in a secured environment. This Academic ERP gives an unprecedented leverage to the management in planning and administering the activities for the whole academic year.

Acknowledging the NTC’s  role, the minister  congratulated NTC Management for their efforts in the phenomenal development of ICT infrastructure for Public Sector with State of the art technologies. “Indeed it is a matter of great pride and honour for NTC under the umbrella of Ministry of IT and Telecom to achieve this milestone as per Governments Vision,” said the minister, mentioning that in this digital age reducing the ‘Digital Divide’ the need for Academic Enterprise Resource Planning (ERP) was crucial.

He said the educational Institution’s in Pakistan were facing a prime challenge in management of Data. The educational departments continue to maintain records manually due to existence of system dissimilarity resulting in mounting disengaged data.

Therefore, the digitilization of manual records is imperative to increase efficiency, establishing and maintaining quality & standards in education.

To cater this gigantic problem, the Minister remarked that NTC under the umbrella of MoIT came up with this innovative solution of academic Enterprise Resource Planning ( ERP) by involving its business partners.

“Ministry has always reposed their trust and confidence in NTC for taking a lead role to foster digitalization in Public Sector,” he said, adding that this is first of its kind program where ERP for Academia is deployed on NTC Cloud based Data Center. “This is a Success story of a Public Sector Organization and a step towards 4th Industrial Revolution,” he said.

As a pilot project, the deployment of this solution will be done for different Universities in Karachi and will be expanded nationwide later on.

He further said NTC has taken revolutionary steps in providing state of the art telecom/ICT services in the Public Sector. “NTC is not only recognized as a major Telecom key operator but as a profit, efficient and forward looking public sector entity,” he said.

The Ministry of IT and NTC is all-geared to play its part as the government’s vital functionary in terms of ICT services. “We are here to implement the Prime Minister’s IT vision, i.e. “Digital Pakistan” in letter and spirit,” he remarked.

Huawei Reveals its most anticipated Flagship Smartphone P9 in Pakistan Lahore: 30 April, 2016:- Huawei has been producing the best products of high quality and...
Read more
Business

The Model Of The Drummer On Islamabad Highway.

The Model Of The Drummer On Islamabad Highway.
Read more