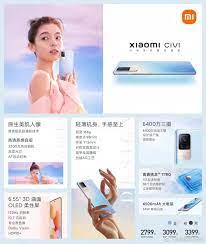 Xiaomi CIVI specifications, pricing were leaked prior to the launch

Xiaomi is expected to announce their first Xiaomi CIVI phone with a brand name at 2 pm (local timing) on the 21st of April in China. The leaked image from the Xiaomi CIVI that mentions all the specifications and prices is being shared across Weibo. Let’s see what we can expect from the Xiaomi CIVI smartphone.

The official poster says that Xiaomi CIVI measures 6.98mm in thickness and 71.5mm in width. It weighs just 163 grams. The phone has an edge-to-edge display and a frame made of metal and an AG glass panel on the back.

It’s Xiaomi CIVI has a 6.55-inch curving OLED display that comes with 1 20Hz of a refresh, 1.07 billion colors, Dolby Vision as well as HDR10+. The centrally-positioned punch-hole display is also equipped with an in-screen fingerprint scanner. It also has a 32-megapixel front-facing camera that has features such as advanced skin renewal at pixel level as well as autofocus and two soft lights.

The rear camera configuration on Xiaomi CIVI. Xiaomi CIVI is headlined by an incredibly large 64-megapixel main camera. It’s also equipped with an ultrawide lens that has a 120-degree FOV as well as a macro lens.

Its Snapdragon 778G chipset is found in the underside of Xiaomi CIVI. Xiaomi CIVI. The leaked poster additionally states that it has 8GB/12GB of RAM and 128/ 228 GB of internal storage. It’s powered by a battery of 4,500mAh that includes support for fast 55W charging.

Toss the Coin this PSL with OPPO

Empty streets, eyes glued to the TV screens, bicolor painted across cheeks, timely cheers and screaming/swearing, yes, it's that time of the year as PSL ... Read More