Peshawar, May 7, 2018:EIGHTEEN – Pakistan’s most luxurious and modern, mixed use, residential project in an aim to further enhance its foothold within the country’s real estate industry, launched its operations in the city of hospitality – Peshawar, through a colorful launch event which was organized to engage media and the locals of the city of Peshawar. The guests were briefed on the future programs of Eighteen and the complete product line that they could invest in. 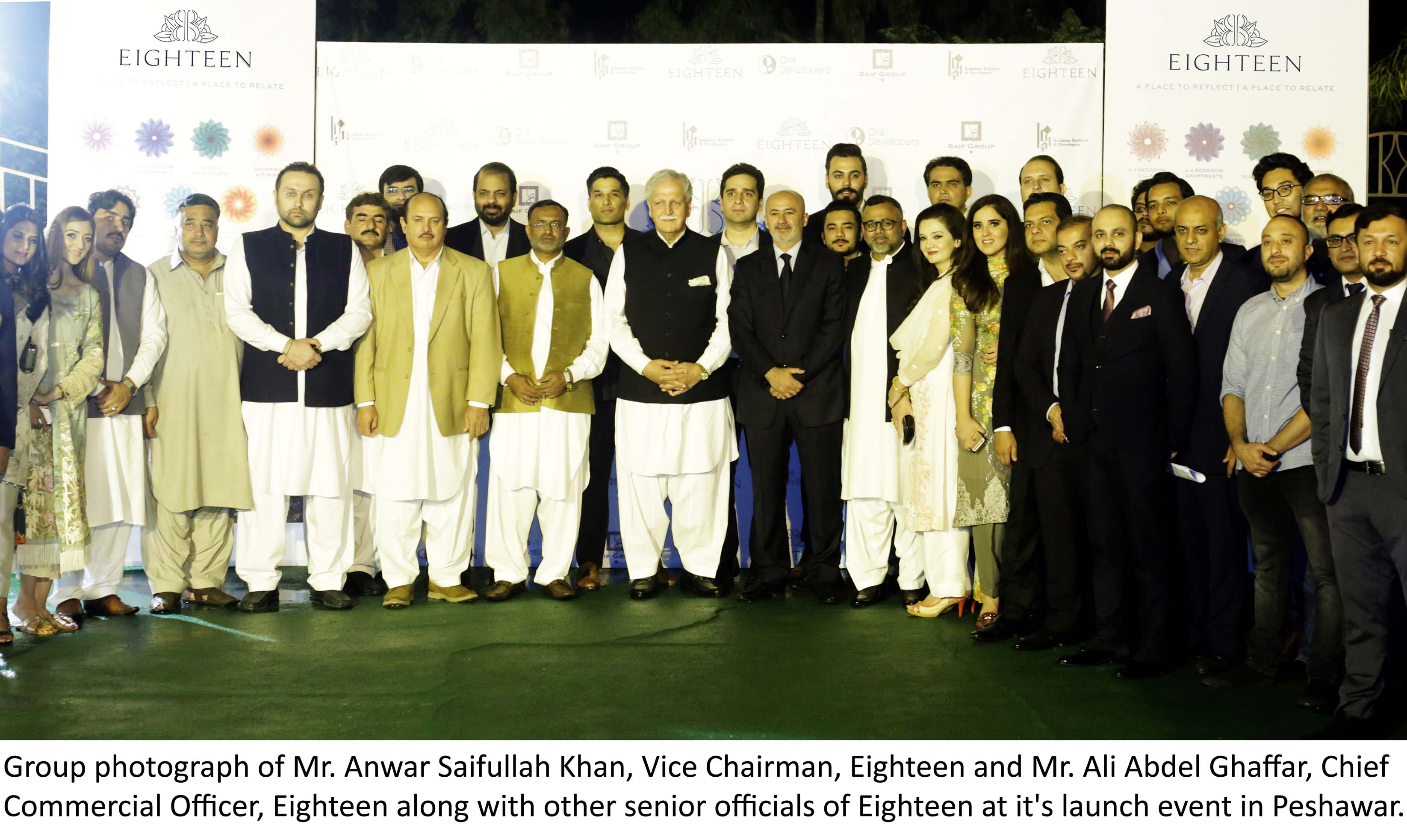 Peshawar is approximately 188 kilometers away from the Federal Capital and its residents have shown considerable interest in the Real Estate Developments of Islamabad. The introduction of Eighteen, sits as an opportunity for the residents of Peshawar to invest the picturesque and beautiful landscapes of Islamabad.

Mr. Anwar Saifullah Khan, Vice Chairman, Eighteen, said, “Today Eighteen is delighted to bring international standards of living for the people of Peshawar, who can now experience this modern, mixed use, residential project just like the way they imagined,”

Speaking about the distinguishing factors that separate Eighteen from other real estate projects in the country, he said, “All the villas and apartments have been designed exclusively in view of the modern ideology of people, and we have tried to add in every bit of this thought process into bringing the dream residential project of people into reality. The privacy measures have been carefully taken care of, with the amenities being second to none, thus delivering a safe, secure and exclusive location designed around the 18-hole golf course” he added.

Commenting at the occasion, Mr. Ali Abdel Ghaffar, Chief Commercial Officer, Eighteen said, “It is a sheer honor for us to unveil our grand residential project line in Peshawar. Our offices here will make it very convenient for the locals who are willing to invest and be a part of Eighteen, and the idea of enhancing our foothold to Peshawar comes right after the tremendous response we have received earlier in Islamabad, Lahore and Dubai.”

The event was energized with several cultural mesmerizing musical performances which was later followed by a sumptuous dinner.

Eighteen plans to open a well-equipped booking and sales office in the capital of KPK to improve interaction with the masses of the province, the office will feature miniature models of luxurious villas and the master plan of the project.

The trained agents and volunteers of Eighteen were responsible to guide interested investors and further enlighten them with the details and future prospects of Eighteen.

Eighteen, is ten minutes away from the new Islamabad International Airport and is the ideal development for local and overseas Pakistanis who enjoy luxury living and state of the art amenities.  Eighteen will be the benchmark for all future real estate projects in Pakistan.

TCL Pakistan, Pakistan’s No.1 LED TV brand, join hands with Daraz, the leading online retailer, to deliver one of the biggest sales this Mobile...
Read more

Recently in Pakistan, rapid penetration of 3G and 4G connections encouraged organizations to rethink their IT requirements and adopt more sophisticated ICT solutions in...
Read more