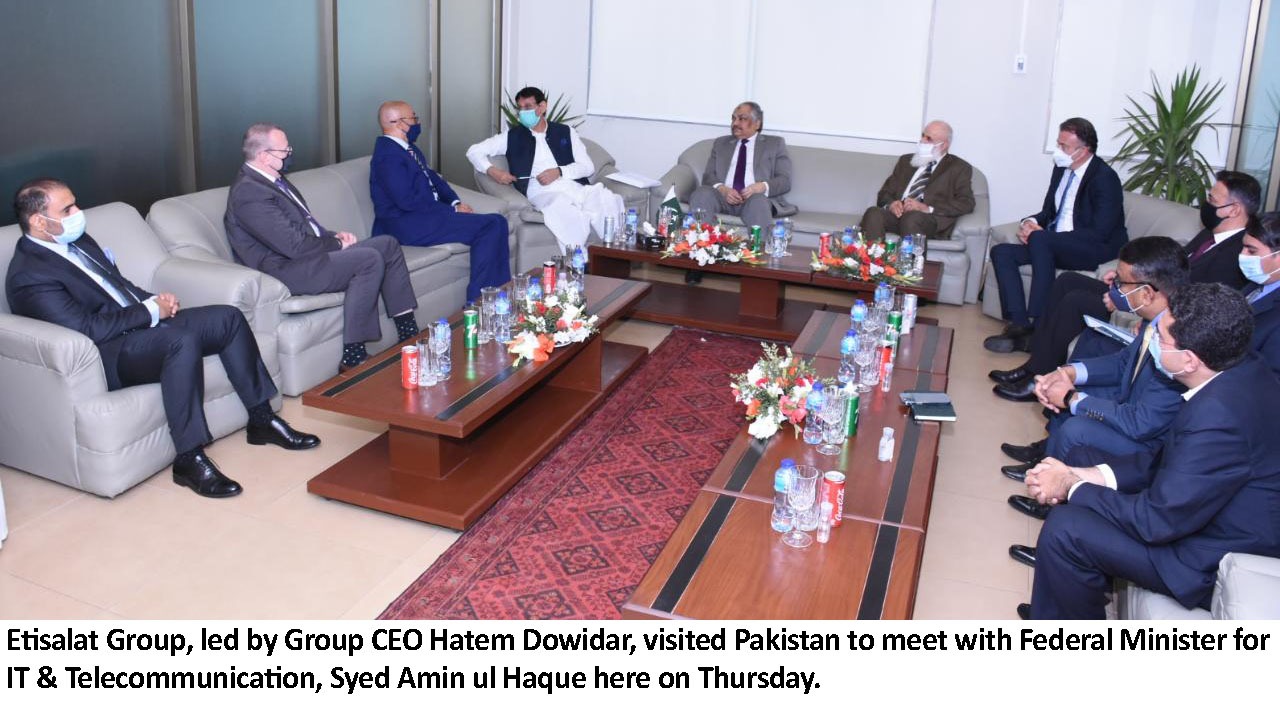 Etisalat’s Group CEO Hatem Dowidar Visits Pakistan
Islamabad, March 11, 2021 (Thursday): A high powered delegation of Etisalat Group, led by Group CEO Hatem Dowidar, visited Pakistan to meet with Federal Minister for IT & Telecommunication, Syed Amin ul Haque here on Thursday.
During the meeting, Federal Minister for IT & Telecommunication welcomed the delegation from Etisalat and discussed matters related to the Telecom Sector in Pakistan. Secretary IT and Chairman PTCL Board, Shoaib Ahmad Siddiqui, along with senior officials from the Ministry and PTCL management, attended the meeting. Both the sides stressed on the need for digitalization in the country and agreed to enhance cooperation towards this vision.

Syed Amin ul Haque, Minister for IT & Telecommunication, said, “For the first time in the history of Pakistan, after the formulation of the Right of Way Policy, the MoITT also credited with taking the revolutionary step of getting its approval from all forums. The policy sets out a fee structure for working in the required areas. Similarly, telecom facilities will be considered as ‘Critical Infrastructure’ and no obstruction or unnecessary problems will be allowed for this purpose. Other important issues, including ‘Common Services Corridor’, Security of Telecom infrastructure, Safety measures on Health principles, have been included in the Right of Way policy, which will be binding on all concerned agencies and administrations, and it is a kind of ‘One Window Operation’.”
Federal Minister also said that on recommendations from Ministry of IT and Telecommunication, the Federal Cabinet has unanimously approved a gradual reduction in various heavy taxes imposed on the Telecom Sector and mobile phone users. This is a major achievement that will directly benefit, not only consumers, but will also help spread the spirit of digital Pakistan, i.e. connectivity, to remote areas of the country. Moreover, FBR agrees to the implementation of the Cabinet’s decision to classify the Telecom Sector including cellular operations as an industry.
Hatem Dowidar, Etisalat Group CEO, acknowledged and appreciated HE Minister IT and his team for taking positive, pro-active steps for the progress of the telecom market in Pakistan. He commended their role on the recent developments on the Rights of Way (ROW) and their championing the need for a healthy and sustainable telecom market. He further added that IT & Telecommunication sector in Pakistan has huge potential and it is heartening to see the government’s drive towards the vision of a Digital Pakistan. “The Tax reduction on Telecom sector will benefit both consumers and Telecom operators as it will reduce tax burden on consumers while supporting Telecom Operators in expanding their infrastructure and services,” he added.

The delegation was also thankful to the Federal Minister for his support on various successful projects that were executed in collaboration with the government. The meeting concluded on a positive note, along with renewed commitment from PTCL and Etisalat to serve the people of Pakistan.

Winner of of the Jazz Sajao 2020 competition

Winner of of the Jazz Sajao 2020 competition, Vehari's Al-Madina Mobile, being handed over the prize by Jazz's Head of Channel Planning & Distribution Umer ... Read More

Mayor of London Office tours tech startup colwiz   As part of a mission to the region promoting post-Brexit business, delegates from the Mayor of ... Read More