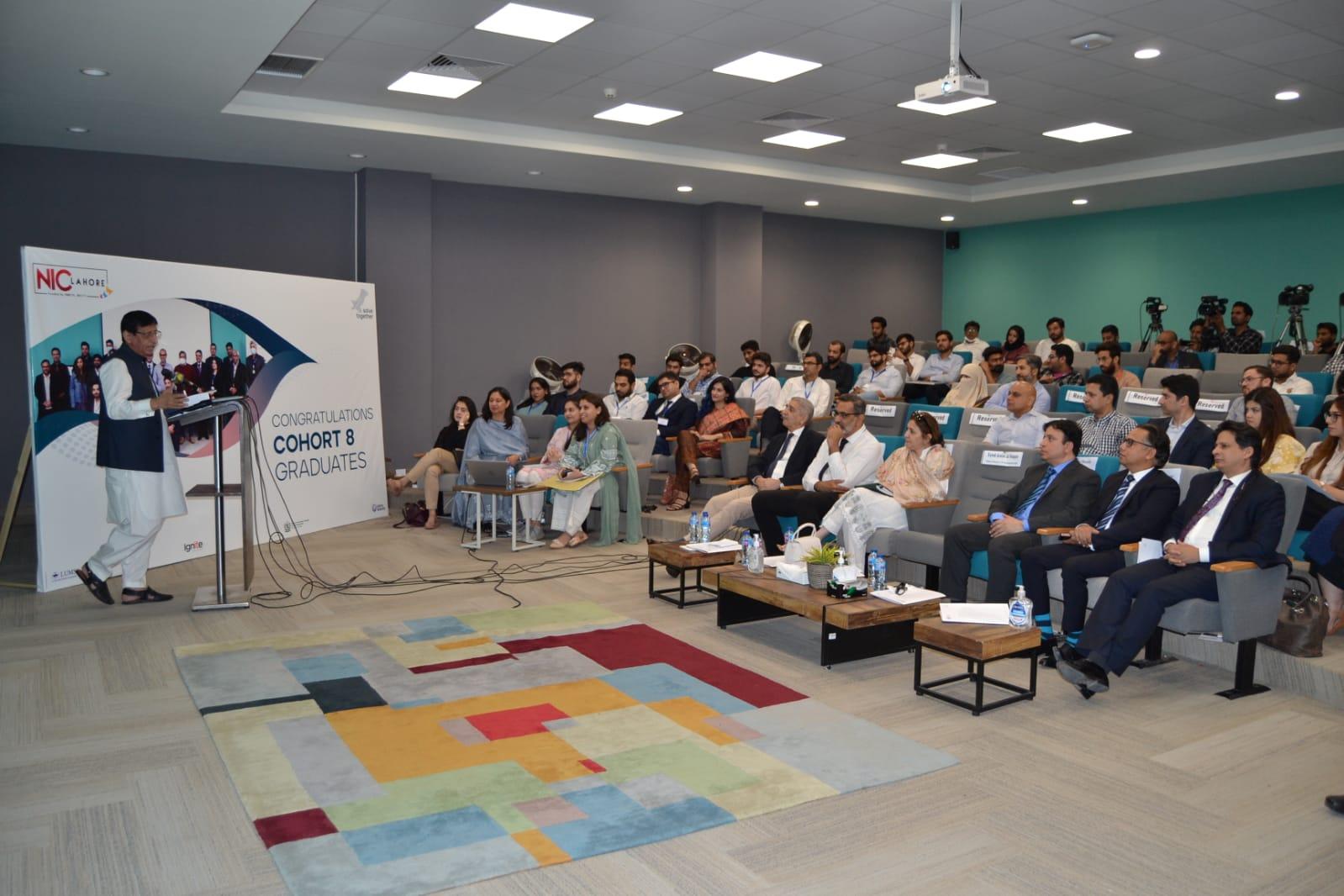 Federal Minister for IT & Telecommunications Syed Amin-Ul-Haque has said that the investments of Pakistani startups grew by almost 5 times over 2020, MOITT through Ignite have been providing both local and international networking platforms to our start-ups to pitch their business ideas and products to potential customers and investors. He was addressing to NIC Lahore as Chief Guest at LUMS for the graduation ceremony of its eighth cohort where cash awards were given to the top three graduating start-ups.

Giving his remarks at the graduation ceremony, Federal Minister for IT and Telecommunication, Mr. Syed Amin Ul Haque advocated for the role of technology in the government’s mission to grow the entrepreneurial ecosystem of Pakistan. He said that IT ministry has taken many steps to boost IT exports and investment in Pakistan. IT exports had crossed $2.1 billion last year and target for this year is $3 billion.

Syed Amin-Ul-Haque further said that National Incubation Centers (NIC) in Islamabad, Lahore, Peshawar, Karachi and Quetta has not only facilitated many like you to work and build on ideas which promote and encourage the investment infrastructure in Pakistan but also towards an accelerated economy. These National Incubation Centers are your platform and we are the facilitators, he said hope that investment in Pakistani startups this year would be between $500-$600 million.

“The newly established incubation centers of Hyderabad and Faisalabad will help us expand and tap into the potential of Sindh and Punjab, we wish to provide the youth of a fora to bring your ideas into reality” he added.
CEO Ignite, Asim Shahryar Husain, stated that Ignite will launch at least 5 more NICs in new cities of Pakistan. Executive Director NITB & Chairman Ignite Board Syed Hussnain Abbas Kazmi in his address to the graduating startups encouraged the entrepreneurs to continue on the path of innovation and reaffirmed the support of the government in their endeavors.

We are eager to refurbish the infrastructure of our entrepreneurial endeavors with modern day ideas, said Dr. Arshad Ahmed, Vice Chancellor, LUMS.
While briefing the audience, Nauman Zaffar, Project Director NICL, reinforced the center’s vision to inspire, enable and facilitate the next generation of Pakistan’s problem solvers. He said, National Incubation Center Lahore at LUMS funded by Ignite passionately supports and enables ideas which create value in Pakistan.

Pitch presentations were also given by the winning startups about their products and future plans. Ignite’s forecast for investment in Pakistani startups this year is between $500-$600 million.
Earlier, during the graduation and prize distribution ceremony, a cash prize was awarded to the three strongest graduates.

Meta and Zindagi Trust are collaborating to launch a broad-based awareness and stakeholder engagement campaign. To curb the spread of harmful content related to child ... Read More

7 New Arrival Items by Rafia Everyone Must Buy

Rafia.pk has become the best place to shop and buy Pakistani designer dresses. Here are some new arrivals you must add to your wardrobe, so ... Read More