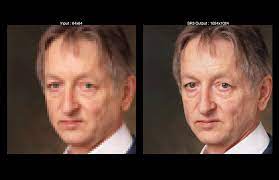 Google is known for inventing the most remarkable features that change the way technology works. And yet again, the tech giant is breaking new ground with new AI which they are currently testing.
The company is playing with a concept called ‘diffusion models’ and while the company had been working towards it, it wasn’t their first priority all these years, but looks like this has changed now. Google AI Blog featured an article about super-resolution photos. This basically refers to giving low-resolution, blurred images a more refined and sharper look using AI technology.

The company’s initial technology is SR3 technology. This stands for Super-Resolution through Repeated Refinement. This technology uses noise resolution. It accepts low-resolution photos as input and gradually adds noise until the image is pure noise. The image then becomes high-resolution. This feature is also able to reverse the idea by breaking through the noise, returning the image to its normal low-resolution form.

The SR3 has done exceptionally well compared with other forms of technology of the same aspect. It had a confusion ratio of 50% when used on 8X upscaled photos, while other similar technologies could only manage a rate of 34%. This shows just how advanced Google’s technology has been and how hard they worked to get it to give images a more photo-realistic effect.

However, this was not the end. Following the success of SR3, the company worked towards another feature in its same line of work. They introduced their new CDM feature, also known as the class-conditional diffusion model.

CDM works according to the principles of ImageNet. ImageNet is a larger dataset but CDM is simpler. This technology will allow users to increase the size of low-resolution photos in a larger sequence, giving them a clearer view without the pixels bursting. Image can be upgraded to any size from 32 x 32, 64 x 64, and 256 x256. The largest size is 1024×1024.

Google is proud to have introduced these technologies. They are both amazing. Google can’t wait for the next generation of diffusion models.

Huawei owes its tremendous success in the first half of fiscal year, 2015; to the services it provides which focus on the end-user’s requirements...
Read more
Business