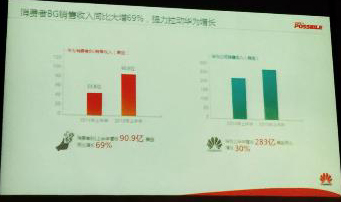 The tremendous growth of Huawei in the first half of the year 2015, has brought the company to another level and the Consumer Business Group has forecasted that the full year sales of Huawei will surely increase to 20 billion $ this year. The reports that have been released by the company have shown the incredible sales growth that Huawei has achieved in the H1 of 2015, with a 69% increase the sales recorded are 9.09 billion $. It has also been announced that the contribution of consumer business revenue has also grown to 32%, which was 24 % year last year. Huawei Pakistan, Director Marketing Devices, Mr. Fanhong Bruce has said, “Because of the rapid growth scored in the year 2015, the Consumer Business sales forecast for 2015 is 20 billion $ in comparison to 16 billion $ last year.”

The remarkable growth strategy adopted by Huawei is inciting business growth in both China and the international market as the Revenue has spurred to 124% y-o-y in China whereas in some other regions more than 40% growth has been recorded. The regions such as North-East Europe, Western Europe, North Africa, Middle-East and South Pacific have recorded respective, 54%, 45%, 164%, 48% and 41% year on year growth.

The shipments of Huawei’s high-end smart phones has grown 70%, according to the report and it states that the total smart phone shipment ratio has grown to 31%, the growth of revenue is 388%, total consumer revenue 42.9% and the contributed share profit has increased to 44%.

Huawei has an Operating System Solution for IoT Technology

Huawei, a global technology master, is advancing with an accelerated pace for the incorporation of best technological solution in daily life. Research and Development units ... Read More

It is recently revealed that the Global Technology Giant, Huawei, has finally decided to enter into the enterprise world with a new identity; PC manufacturer. ... Read More The diversified community of smart phone users constantly remains in need of such new devices which satisfy their need of possessing extraordinary smart phones which, ... Read More