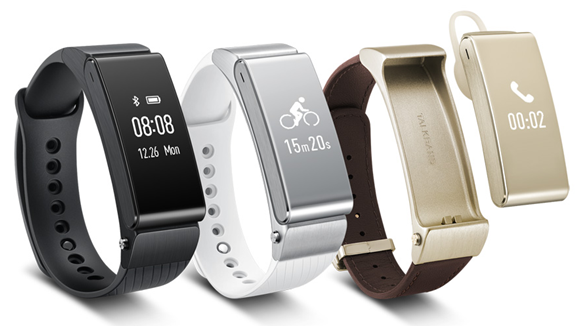 Huawei Talkband B2 Your Smart Companion

Talkband B2 is a highly advanced wrist band, which possesses such extraordinary features which undoubtedly make it a perfect companion for your every day smart life. Huawei has launched it recently, along with its other smart devices such as P series, P8 and P8 lite. This Talkband is compatible with the smart phones which have Android 4.0 above and IOS 7. This smart band can be used in numerous useful ways i.e. as a Bluetooth, as a fitness tracker, sleep manager, phone locator etc. The UI of this smart band is very simplified and easy to understand, presenting all the applications etc as circles on the touch screen which continue to add up with further use. Given its size and features the battery power of this device is also very strong, 95 mAh  i.e. Stand by time (if Bluetooth is not used) is 12 days and with normal usage its 5 days with 6 Hours On calls and the Talkband gets charged in half an hour with the help of a built-in micro USB.

Huawei has made technology easier for its customers by manufacturing Talkband, which would serve as their exclusive fitness tracker as well. This smart band has the ultra cool feature of monitoring your daily exercise routine. The Talkband is water and dust proof, which makes it easily wearable during your sweaty exercises. This Band serves as the best “FITNESS TRACKER” having built in 6 Axis Sensors, which detect the type of exercise you are doing and helps you by counting your steps, distance covered and calories burned etc.

Huawei’s Country Marketing Head, Mr. Fraz M Khan expressed his view about this band in these words, “The Talkband is indeed a very useful product of Huawei for the gadget lovers as it provides variety of effectively practical features. The elegant appearance of this band makes it a very attractive accessory as well.”

The Talkband also acts as “Sleep Monitor”; it will precisely measure the quality and length of your sleep patterns. One can also remove the center body of the Talkband and use it as Bluetooth by attaching the Rubber part, available with the device.

All in all, Huawei has hit the year 2015 with its extra cool and highly innovative devices which have helped this emerging Technology giant gain remarkable market success in the first half of the year 2015. This company is all ready to give tough competition to its rivals and set new records in sales and services.

Honor 7 has been launched by Huawei, recently. It’s an excellent quality smart phone, available at the price which is slightly outside the mid-range, but ... Read More

In the world of ever-progressing specs the large brands are competing to beat each other with each new release, in the hopes that they have ... Read More