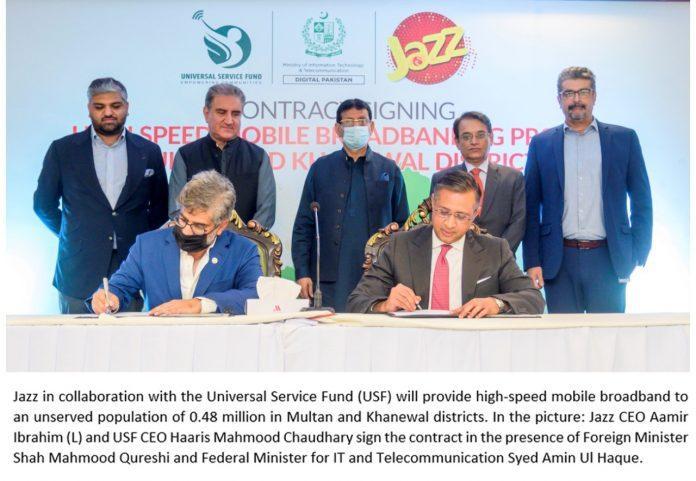 According to Syed Amin Ul Haque, under these projects, we are spending a total of PKR 708 million for provision of high speed broadband services in three districts of Bahawalpur, Bahawalpur, Rahim Yar Khan and Bahawalnagar. About 2.6 million people living in 846 villages will benefit from this. Similarly, in Dera Ghazi Khan Division, four districts DG Khan, Layyah, Muzaffargarh and Rajanpur, PKR 141 million is being spent. While PKR 4.47 billion is being spent on three projects related to the laying of optical fiber cable. With the completion of these projects, an area of about 2, 000 sq. km will be connected with OFC. More than 25% work has been done on broadband services projects. Completion of these projects will provide the fastest broadband services to 393 villages with a population of over 0.85 million.”

While addressing the ceremony, Foreign Minister, Shah Mahmood Qureshi said that he was pleasantly surprised to hear the performance of the MoITT which is working day and night for the fulfillment of the Prime Minister’s Digital Pakistan vision. He thanked the Federal Minister, Syed Amin Ul Haque for initiating the development projects in Southern Punjab and said that the Ministry of Foreign Affairs would provide all possible assistance and support for the promotion of IT industry and showcasing of Pakistani IT products around the world because Ministry of IT is at the forefront of those sectors through which numerous job opportunities and the country’s economy can be strengthened.

Sharing his views on the development, CEO-Jazz, Aamir Ibrahim said, “Jazz has invested US$ 462 million during the last two years mainly to expand its 4G footprint in rural and semi-urban areas. This is in line with our mission to bridge the digital divide and to collaborate with the Government of Pakistan in helping realize the Digital Pakistan vision. Today’s contract signing is a testament of our commitment to create ICT-led socioeconomic opportunities for the masses.”

Earlier on his welcome address, CEO-USF, Haaris Mahmood Chaudhary said: “The USF is committed in its resolve to empower the marginalized communities of Pakistan. This project will benefit an unserved population of 0.48 million in 170 unserved mauzas, thereby covering an unserved area of 1,323 sq. km. of Multan and Khanewal districts. The project will be completed in 12 months.”

Are you in need of storage? 9 offers on SD Cards as well as USB Sticks and SSDs

If you're low on storage, Amazon has some deals to replenish your storage items before you take a picture of all those Christmas memories....
Read more
Telecom