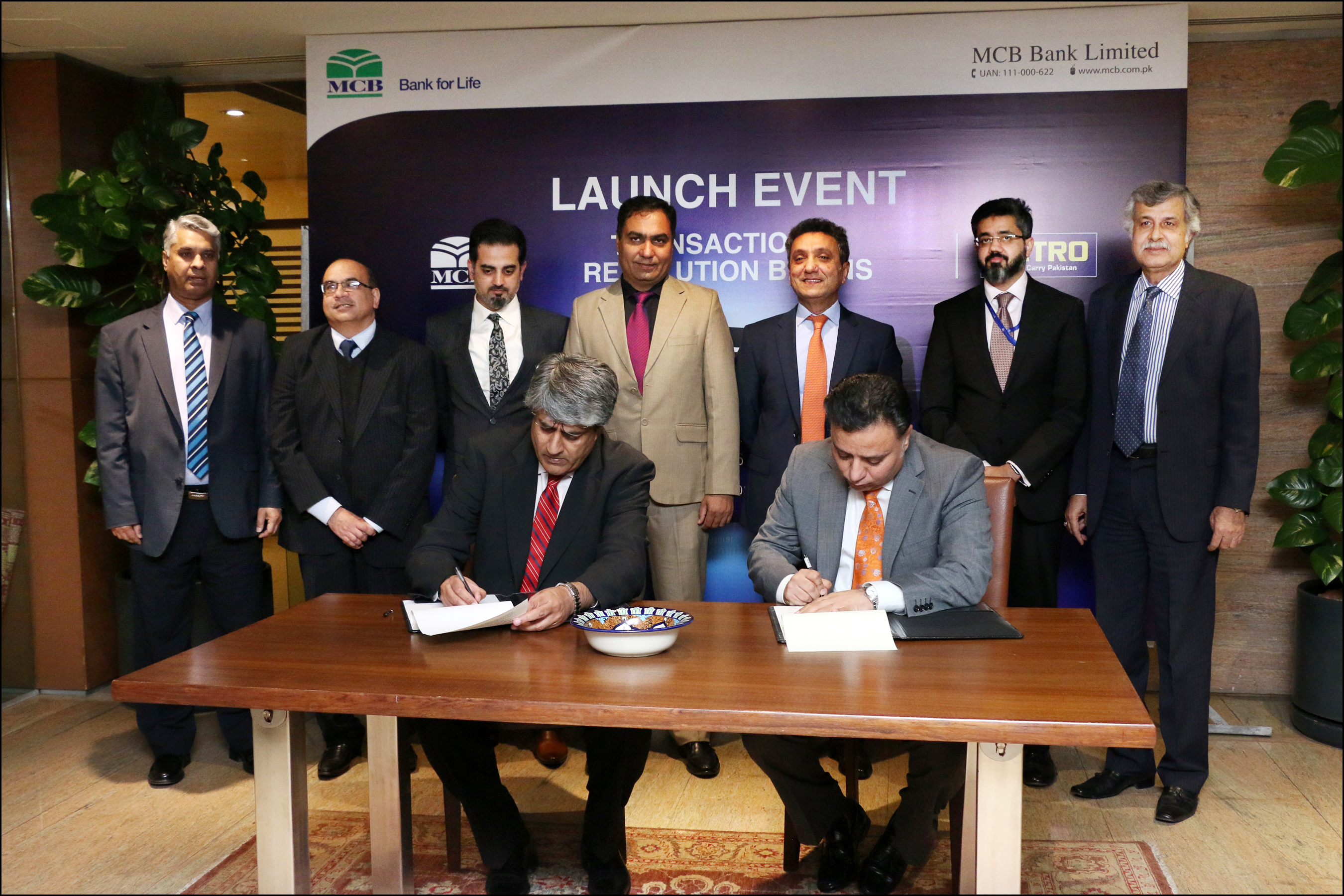 [Lahore: 8thDecember 2016]MCB Bank Ltd, Pakistan’s leading private sector bank, haslaunched a new pioneering financial product, the MCB SME Card. The first of its kind card based clean lending product was unveiledduring a MoU signing ceremony with METRO Cash and Carry Pakistan, whose Hotel/Restaurant/Caterers(HORECA) customers would be the first to benefit from the new offering. The MCB SME Card launchfeatured the participation of President MCB Bank, Mr. Imran Maqbool,Retail Banking Head – North MCB, Mr. Zargham Khan Durrani, Director Finance, METRO Cash and Carry,Mr. Asim Isar and senior representatives from both organizations. Participants at the event were briefed about the innovative product byHead of Products, Retail Banking Group MCB, Mr. Hassan Tariq.This innovation marks the first time a formal banking institution is offering a working capital line of PKR 5 million to small enterprises (SEs) &medium enterprises (MEs) against a card which operates at select merchants and dedicated MCB Bank Point of Sale (POS) machines. Salient features of the SME card includeno borrowing costs (maximum grace period of up to 52 days), no collateral requirements and secured transactions besides other benefits.Speaking at the event, Mr. Imran Maqboolemphasized the importance and role of SMEs in developing economies and explained the challenges for SMEs during the loan sanctioning process. Mr. Zargham Khan Durrani further explained how this product will eliminate those challenges and will offer substantial financial relief to SMEs by reducing their financing cost while bridging their working capital needs. He also appreciated and thanked METRO Cash and Carry for joining hands with MCB Bank in this venture which has the potential to yield significant economic results.Addressing participants at the event, Mr. Asim Isar explained METRO Cash and Carry’scontribution to the overall global retail segment and acknowledged the need of such a product in the local market. He appreciated MCB Bank for developing an innovative product which rightly addresses the needs of SMEs and expressed his appreciation on being a part of this venture. He was hopeful to see other banks adopt this concept which he felt would have a positive impact on the Pakistani economy.

JazzCash has partnered with Yayvo.com for one of the biggest online shopping events of Pakistan called White Friday 2018. This strategic partnership makes JazzCash the ... Read More

The smartphone giant wishes to spread love this Eid-ul- Adha by offering amazing discounts on its leading products  Huawei has yet another exciting announcement for ... Read More