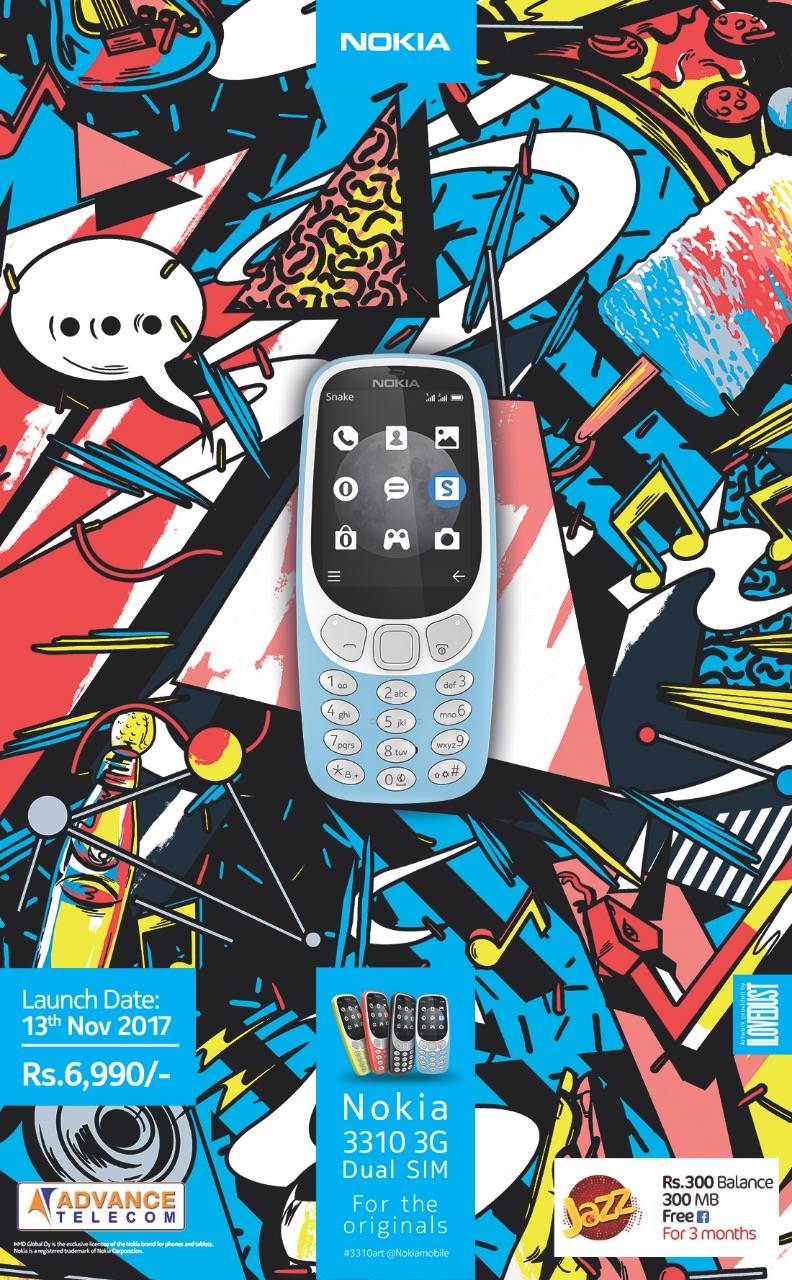 Karachi, November 13, 2017: HMD Global, the home of Nokia phones, introduces the Nokia 3310 3G. With fresh new colors and a new user interface that lets fans pick a theme to suit their mood, this modern classic is now 3G enabled and can be enjoyed in even more countries around the world, including Pakistan. And yes, it still has Snake. Available from November 13, the Nokia 3310 3G combines the talk and text appeal of the current model with a 3G data connection, meaning you can now enjoy the classic across more countries. The retro user interface has been improved to deliver an enhanced, customizable experience meaning you can now change the icon colors and position to ensure your favorite functions are exactly where you want them to be.

“Reimagining the new Nokia 3310 variant with 3G network combines the talk and text appeal of the current model with a 3G data connection, which means that the users will now get more access and faster connectivity with their Nokia 3310,” said Kamran Khan, Head of Near East, HMD Global.

“The tremendous response we received ever since the re-launch of Nokia’s iconic 3310 has been just overwhelming, and the users have been asking for this iconic phone to support 3G. Today, we are happy to introduce Nokia 3310 3G to the fans in Pakistan,” he added.

In keeping with the series’ bold and colorful heritage, the Nokia 3310 3G is available in four distinctive colors – the ever popular Yellow and Warm Red, and beautiful new Azure and Charcoal hues, all with a matte finish and new silver keypads.

Ergonomically redesigned for an even better in-hand experience, Nokia 3310 3G has more spacing between the buttons, letting you dial, text and tweet more comfortably

The addition of 3G data connectivity brings this popular phone to even more fans around the world. The Nokia 3310 3G comes with the dual SIM variant in Pakistan, has up to 6.5 hours of talk time and an impressive up to 27 days of standby time so you’re always able to stay in touch

Audionic is celebrating Cricket Fever from 8th to 10th March at Dolmen Mall Clifton, Karachi. Being a firm supporter of cricket and sports in the ... Read More

SHOPLUS ONLINE and OFFLINE SHOPPING EVENT, THE REAL GAME CHANGER FOR RETAIL INDUSTRY The retail business is an especially adept case of how ventures and ... Read More