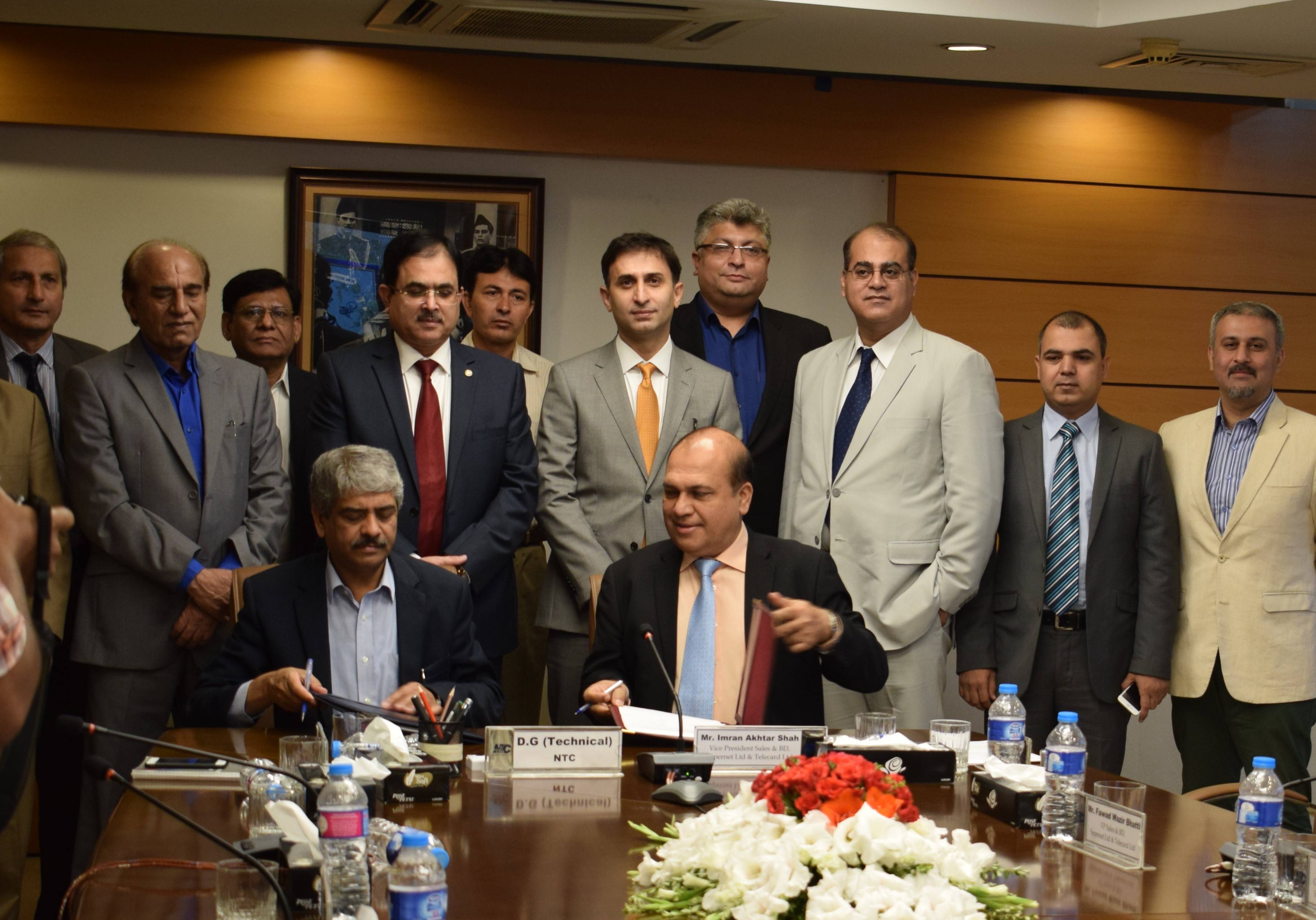 ISLAMABAD: National Telecom Corporation and Supernet signed an Agreement to cooperate in developing Business and support in ICT / Telecom solutions and Data connectivity requirement of the Public Sector. The signing ceremony was attended by Brig (Retd) Viqar Rashid Khan, MD NTC and Mr. Shams ul Arfeen, CEO Supernet & Telecard Group. The Agreement was signed by the respective delegates of both organizations. NTC is the official IT & Telecom service Provider for the Government of Pakistan and has been granted integrated license to provide Telecom / ICT services to Armed Forces, Defense Projects, Federal Government, and Provincial Governments or as the Federal Government may determine. NTC is committed to providing secure, efficient and state-of-the-art ICT services to its valued subscribers.  Speaking on the occasion, Brig (Retd) Viqar Rashid Khan, MD NTC expressed that NTC adopted technology and system for most innovative and reliable ICT services to its subscribers. He added that the secure ICT infrastructure provided by NTC will facilitate the subscribers in automating and thereby improving operations and processes. He also thanked CEO Supernet for reposing his trust in NTC. CEO Supernet & Telecard Group, Mr. Shams ul Arfeen, commented that ICT plays the role in improving efficiency, transparency and help management to enhance productivity. He added that we anticipate bright future while shaking hands with NTC to facilitate the customers as we maintain a strong presence across the country.

MD NTC Brig (Retd) Viqar Rashid Khan enlightened the audience of the achievements of NTC during the past four years. NTC is the first operator in Pakistan to establish a Cloud Based National Data Center for the Public Sector. NTC has witnessed unprecedented financial growth of 359% during 2015-16 and an increase in broadband subscriber base by 36%. NTC has extended its services from 54 districts/cities to 87 including underdeveloped districts in Sindh and Baluchistan. The number of exchanges increased from 139 (in 2012-13) to 260 in 2016, thereby overall 87% increase. NTC utilized 99% of its ADP budget in FY 2016-17. Also NTC is the first to use M2M (Machine2Machine) and P2P (Point2Point) networks for extending fixed lines and data connectivity. Large scale Wide Area Networks of CDNS, Election Commission, State Bank, AGP and other strategic organizations have been established. Pertinent to mention that, NTC has also signed a Service Provider License Agreement (SPLA) with Microsoft to provide SaaS in the country through its cloud based National Data Centre. NTC under Public Private Partnership is pursuing strategic partnership with private operators in the Telecom industry to provide new services for its subscribers. NTC is the first in the country to introduce new apps like Go-Smart for its customers and have extended 3G/4G Mobile data connectivity to its subscribers under Public Private Partnership.

MD NTC further briefed about the future plans and projects of NTC. These include establishment of strategically vital submarine cable landing station at Gawadar as an alternate route to existing Submarine Cable Networks. NTC further envisions expanding its network to all districts of Pakistan within the next 3 to 4 years. NTC is also managing Country Code Top Level Domain (CCTLD), پاکستان dot, for Urdu and local languages.

NTC will Insha’Allah continue to serve the Government and Public Sector through reliable and secure telecom infrastructure to safeguard against cyber threats. NTC is committed to achieving ‘Digital Pakistan’ — a vision of Govt. of Pakistan.

A 16-member group of the officers of Pakistan Air Force (PAF) Combat Commanders School is undertaking a study tour of Turkey from 23-30 July 2015. ... Read More

A new Honor Gadget Ready to Hit the Market