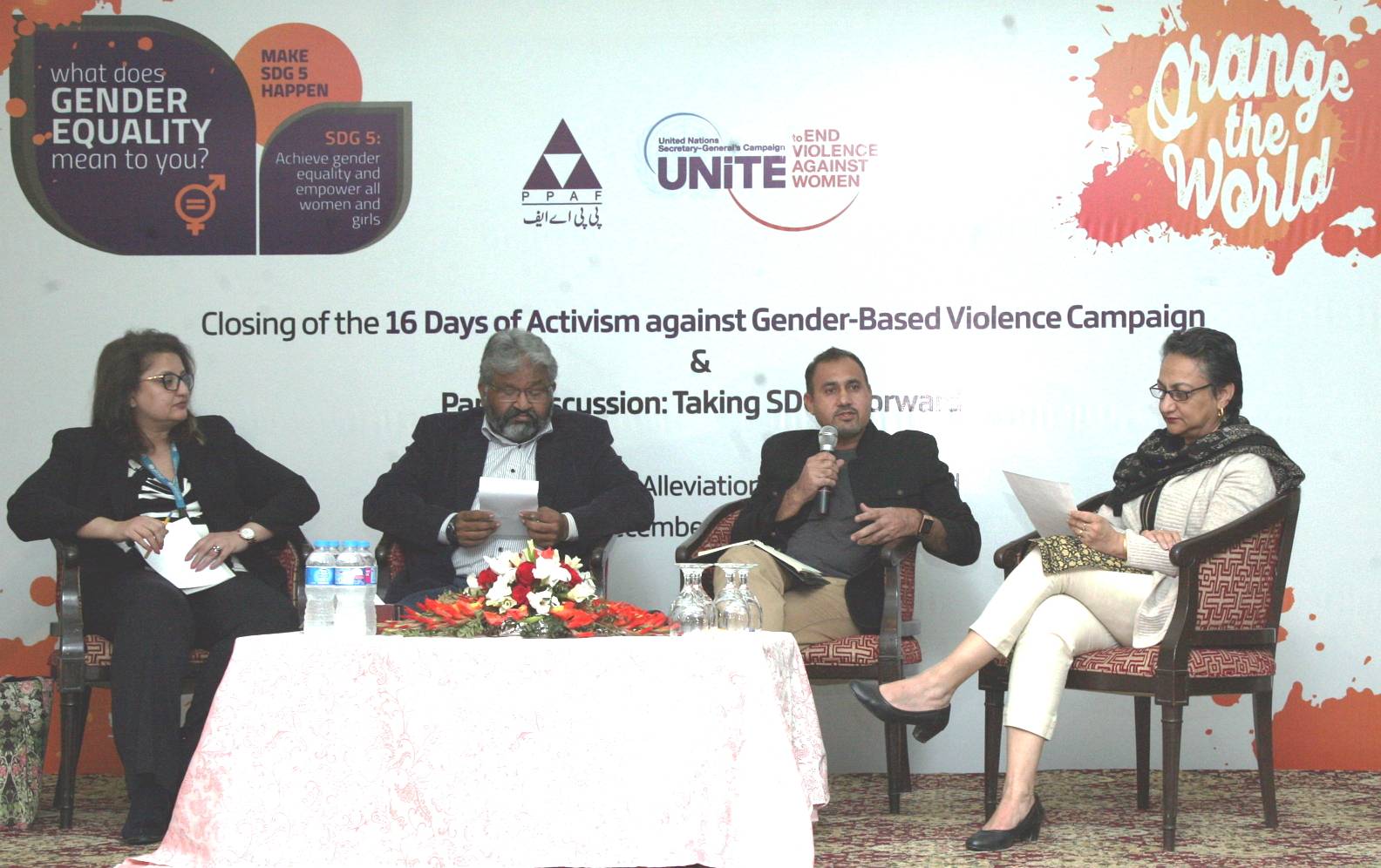 ISLAMABAD December 19, 2017: Pakistan Poverty Alleviation Fund (PPAF) marked the closing of 16 Days of Activism against Gender-Based Violence and held a panel discussion on taking SDG 5 forward. Experts from prominent organisations reflected on how to drive action in Pakistan on the 5th Sustainable Development Goal which is to achieve gender equality and empower all women and girls. PPAF has been hosting 16 days of Activism against Gender-Based Violence for four years and the organisation has come up with various initiatives for raising awareness, supporting gender equality and engaging people to talk about the harmful effects of violence against women and girls.

Mr. Mustafa commented, “Much more needs to be done to ensure gender equality and raising awareness about the issue. I applaud the efforts of legislators for passing laws against domestic violence but in tandem, we must ensure that the bill is implemented.” He added that “It is disturbing that 12 million women are not registered as voters, this should be an eye-opener for activists, government and non-government organisations.”

Ms. Mehreen quoted 2015 report which valued the unpaid work women do globally at $10 trillion and called for more recognition for unpaid women, adding that 78pc of women in Pakistan do not work. She urged government and non-government organisations to invest in the economic empowerment of women and to establish more vocational training centres across the country for them.

Ms. Simi Kamal, who chaired the discussion, highlighted the fact that not all provinces of Pakistan have formulated or passed laws for the protection of women and urged legislators to play their due roles in supporting and enacting such laws.

Mr. Azhar Hafeez, emphasized that, “Inclusion and empowerment begins at home. If daughters, sisters and wives are given the same opportunities as the boys and men, if boys and girls are treated as equals, they grow up to be much more balanced individuals, equipped to fight gender stereotypes, and in turn are able to empower future generations.”

Qazi Azmat Isa, CEO PPAF, while talking about the global situation and circumstances in Pakistan pointed out that “At least 70% women receive a beating in Pakistan as per the Human Rights Watch estimate. Over 5000 Pakistani women are killed annually due to domestic violence. Globally, 1 out of 3 women are subject to violence. Only 25 women are CEOs in the Fortune 500 companies; in Pakistan perhaps 2 women are at similar positions. Girls are pulled out of school and forced into child marriages. Millions of women and girls are held back by harmful laws, norms and practices that see women and girls killed for honour.”

He further maintained that, “It is because of these practices that we have not progressed as a nation. Women are generally mistreated in our country and we have made very little investment in human capital. Our society is not in balance and we all know that an unjust society cannot last long. I imagine a Pakistan where women and girls are free from fear, free to live and thrive to their fullest potential; and I invite you all to recommit to our values and make sure that we work towards such a future.”

PPAF recognizes the critical need to empower women as active participants in the development process and is working on equal inclusion of women in 130 districts across Pakistan through its partner organizations. PPAF is committed to bringing empowerment and improving representation of women in its internal processes and external programmes and operations. PPAF believes that the country’s gender gaps can only be met with a conscious mandate of inclusion, and in the active participation and leadership of women within the organization, through its partner organizations and in the communities PPAF works for.

From 25 November, the International Day for the Elimination of Violence against Women, to 10 December, Human Rights Day, the 16 Days of Activism against Gender-Based Violence Campaign is a time to take affirmative action to end violence against women and girls around the world. The international campaign originated from the first Women’s Global Leadership Institute coordinated by the Center for Women’s Global Leadership in 1991.

NEWER POSTA.G. E Industries partners with Elahi Group of Companies to excel in the Cable Market
OLDER POSTZong 4G’s Free WhatsApp offer continues to be the best offer for customers yet