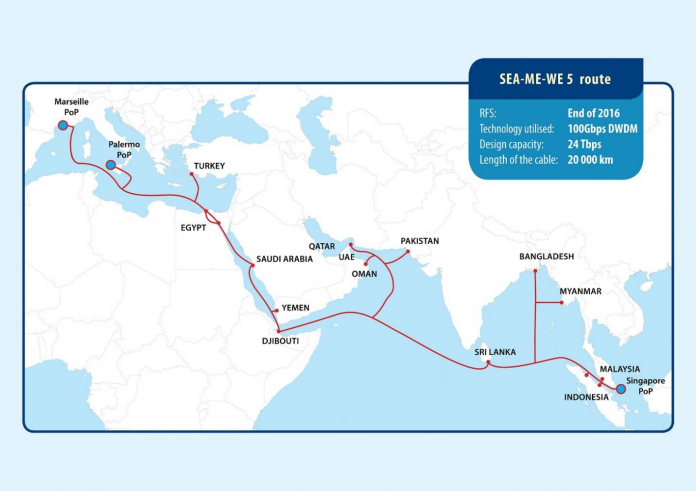 Award-winning collaboration bridges 16 countries across 3 continents
The SEA-ME-WE 5 Consortium announced today the completion of the 20,000- kilometre subsea cable infrastructure developed by a 16-nation consortium. This submarine cable system won the Project of the Year – Subsea award at the Global Carrier Awards in Paris in November 2016 for its technological and managerial excellence.

The SEA-ME-WE 5 subsea cable system, spanning over 16 countries from Southeast Asia to Western Europe, is a technological breakthrough which marks a global communications milestone. It is designed with a capacity of 24 Terabits per second on 3-fibre pairs, fully capable of accommodating the future demand of data from other bandwidth-intensive applications such as enterprise data exchange, internet TV and online gaming.

The SEA-ME-WE 5 submarine cable’s advanced 100Gbps technology is expected to meet the quadrupling of bandwidth demand between Europe and Asia, providing the lowest latency and further enhancing the network diversity and resilience to the heavily loaded Asia to Europe route. In contrast with other submarine cable systems, the SEA-ME-WE 5’s main endpoints are carrier-neutral/open Points-of-Presence (PoPs) and not just Cable Landing Stations (CLS).

“The completion of the SE-ME-WE 5 project is a landmark system upgrade for all data users worldwide. This system facilitates a new age of digital transformation and innovation, catalysing greater economic activities, trade and growth across three continents.” noted Linette Lee, Chairperson, SEA-ME-WE 5 Consortium Management Committee. “I would like to thank all the members of the consortium for their unstinting support and commitment toward this project. Together, we collaborated across different time zones and overcame numerous challenges to achieve the complex integration of technologies as promised and on time.”

Karandaaz Pakistan has launched a study on the bankability of the road transport sector. The transport and logistics sector is one of the most...
Read more
Business

On World Book Day, SOC Outreach announces the world’s first bulletproof book to tell the story of Shazia, Kainat and Malala In order to...
Read more