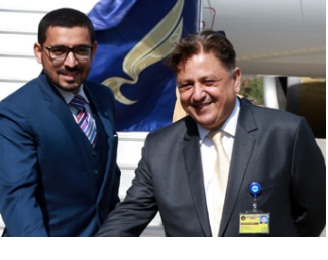 Shaheen Air International Welcomes A New Airbus A319 To Its Fleet

Shaheen Air International Welcomes A New Airbus A319 To Its Fleet

Karachi –January 19, 2017:Shaheen Air is elated to announce the inclusion of a new aircraft to its fleet. The arrival of the new Airbus A319 marks a historic milestone for the company as it rebrands itself. The aircraft revealed the new logo of Shaheen Air that aptly compliments the entity’s vision and innovation in setting new standards in the field of aviation.The new jet is first-in-line to don the new livery of Shaheen Air.

It comes powered with technological advancements and offers more comfort to passengers. With its inclusion, the company aims to redefine its mission of providing a cost-effective and secure air travel option for travelers.The refreshed brand identity builds on the philosophy of Shaheen. It goes beyond the aspect of a logo’s evolution to deliver the highest standards of service, punctuality and reliability, marked by genuine hospitality from the company’s passionate people. It also extols the carrier’s dream to spread its wings and be a force for good through value creation that sustainably connects and enriches the world.While narrating the triumphs of Shaheen Air, KashifSehbai, Chairman, Shaheen Air International said: “This is a momentous day for the Shaheen Air family as we unveil our new brand identity. It is not only an embodiment of our zealous values, but is also a frontrunnerto a promising future. With this new aircraft, we are poised to become stronger and thrive in this intensely competitive airline industry.Shaheen Air began its journey as Pakistan’s first private airline 24 years ago. It was the first airline to earn the privilege of being honored as Pakistan’s second national carrier. With 25 planes under its auspices, it is the country’s largest private carrier with a young and passionate crew, flying to seven local and 13 international destinations.

Mobile AI: The New Reality of Mobile Intelligence Lahore, October 13, 2017: Intelligent smartphones are no longer simply something to look forward to in the ... Read More

Camon CX, the new Camera Phone from TECNO Mobile, all set for the launch

It all started with one right step; that’s how LUMS changed so many lives

While penning down my experiences for this piece, I can’t help but recall a time when I actually dreaded the thought of joining LUMS, an ... Read More