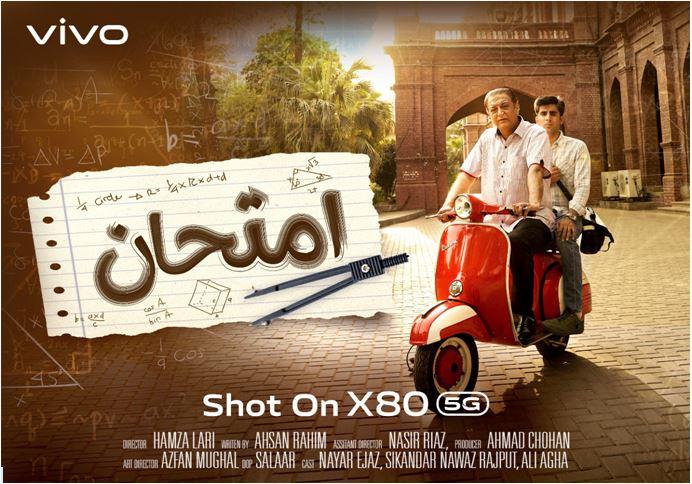 vivo, the leading global smartphone brand recently launched its latest device in the X Series—vivo X80. With the launch, the brand also announced a campaign under the theme ‘Stories. Redefined.’ where it partnered with filmmaker to produce the art of storytelling on screen via smartphones. vivo also invited people across Pakistan to share their stories. vivo then collaborated with Hamza Lari — a well-respected director in the industry to empower users to make the best out of vivo’s leading technology, channelize their creative talent and explore vivo’s X80 to make films. With the launch of Vivo X80, the brand has now officiallyreleasedshort film named “Imtehan”today on through its official media channels.

While all the stories were outstanding, Ahsan Rahim— a famous actor, writer &director selected the most relatable and heart-warming story and refined it to document for the audience. Then Hamza Lari brought the story into reality with vivo X80.

Discussing his experience of using a smartphone to make films and vivo X80’s camera features that were most used throughout the filming, Hamza Larisaid “It has been an absolute pleasure partnering with vivo for this filmmaking project. The X80 is a truly magnificent smartphone and gem for both aspirational and professional videographers. During the shoot, I would constantly explore different features, filters and lighting to set the mood. What I love about the device is its user-friendliness. The whole process was so simple to understand that I quickly grasped my way through the device. As a filmmaker, I enjoyed both the creative and the technological process of shooting thanks to vivo X80. Another impressive detail is vivo’s genius collaboration with ZEISS. vivo smartphones in any case are known for their camera’s versatility but the ZEISS Professional Imaging has ensured that users experience professional photography at its best”.

Mr. Muhammad ZohairChohan, Director Brand Strategy at vivo Pakistan said, “The wonders of X80 have added yet another feather to vivo’s cap and we couldn’t be prouder of this achievement. Partnering with a well renowned director like Hamza Lari has been such an honor because minds like his are not only creative but are equally passionate about the entire process. As a team, we are so proud to bring a smartphone master like X80 to the market because of its superior camera capabilities. Watching Hamza Lari engrossed in the device, thoroughly enjoying himself at work has made us extremely happy. It has also doubled the happiness of watching the short film because this is a result of all our continuous efforts. We also hope that ‘Storied. Redefined.’ inspires youngsters today to chase after their dreams because if a smartphone can evolve with high level professional photography abilities, everything is possible.”

Vivo Brings a New Selfie-Shooter V7 to Consumers in Pakistan

Vivo Brings a New Selfie-Shooter V7 to Consumers in Pakistan Lahore, November 22, 2017: Vivo has unveiled the V7, a new member of the selfie-shooter ... Read More

Redmi 5+ to Exclusively Launch on Daraz