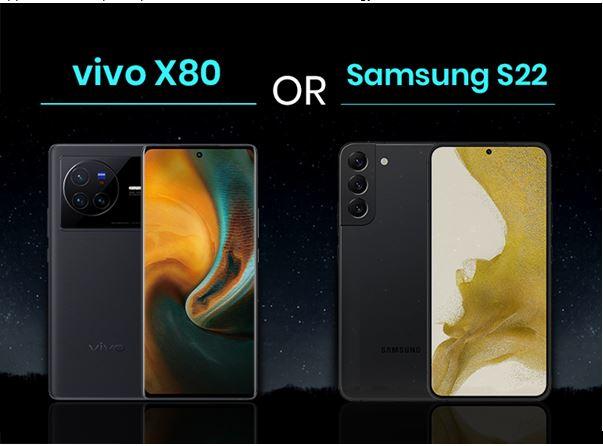 Vivo, a leading global brand in the smartphones industry, launched its latest flagship, the vivo X80. This device has captured the mobile photography scenario in the country with a vice grip. Standing true to its aim, the latest X series smartphone comes with a technology that redefines photography and cinematography at its core. The X80 is a well-rounded, supreme device with a great aesthetic appearance, a superior performance and innovative technology.

The X80 is a result of extensive research and technological breakthrough that is only possible due to the partnership between ZEISS and vivo. Both the companies have come together to give rise to this extraordinary device with features that stem from both parentage.

The X80 as a leading flagship smartphone that features the latest technology, can be compared with the best smartphones out there and give them a run for their money. X80 as a smartphone that redefines camera innovation, stands at peak of the smartphone photography industry.

Taking a look at the X80 and the Samsung Galaxy S22 side by side, we can clearly see the difference in technology and features:

The X80 is way ahead of its competition when we speak about the display size and quality. The X80 has a 6.78’FHD Screen. Whereas the Galaxy S22 features a 6.1’FHD Amoled screen. It is without a doubt a great experience to use a display that offers better visuals in comparison to a device with a smaller display size. When talking about the processing power of the X80, it runs on MTK D9000 which is a top of its grade processer with heavy duty performance. While the S22, runs on the Snapdragon 8 Gen 1 Processor.

Talking about the storage and RAM capacity of the Smartphones, the X80 offers a 12GB RAM and 256GB ROM. Whereas the S22 offers only 8GB RAM with 256GB ROM. Yet again the X80 offers better specs compared to the S22. A higher RAM is directly related to a better performance. Diving further into the comparison, we can take a look at the battery capacity of both the devices. The X80 comes with whopping 4500mAh battery with 80W FlashCharge while the S22 offers a 3700mAh Battery with 25W Fast Charge. This peculiar difference can be one of the biggest factors when it comes to a superior device. The 4500mAh battery already has an edge over the 3700mAh battery yet the 80W FlashCharge of the X80 seals the deal in this spectrum of the comparison.

The biggest factor in this comparison is that. The X80 is a device that customers can buy for 149999 in the country. Whereas the S22 comes at a price of 179999. This huge difference in the price yet X80 offers the best in line features and specs to. Its customers for a superior experience and great customer satisfaction.

It is only right to say that the vivo X80 comes out as a superior device in this comparison between the X80 and Samsung Galaxy S22 with clear proof. In conclusion, the X80 is a device that is cut above the rest of the competition in the smartphone industry. It offers best when it comes to smartphone technology and innovation in terms of appearance, performance, and camera. All that at an affordable price compared to other flagship devices. Customers can without a doubt go forward and choose the X80 without any hesitation.

QMobileis all set to rock the Pakistani music scene

QMobileis all set to rock the Pakistani music scene Q-mobile, a market leader in the mobile industry, has been a proud household name serving the ... Read More

Nayatel & Huawei Technologies Pakistan Celebrate a Decade of Business Together

Nayatel & Huawei celebrated a decade of a successful partnership at Serena Hotel in Islamabad. The event has attended by both teams and there was ... Read More