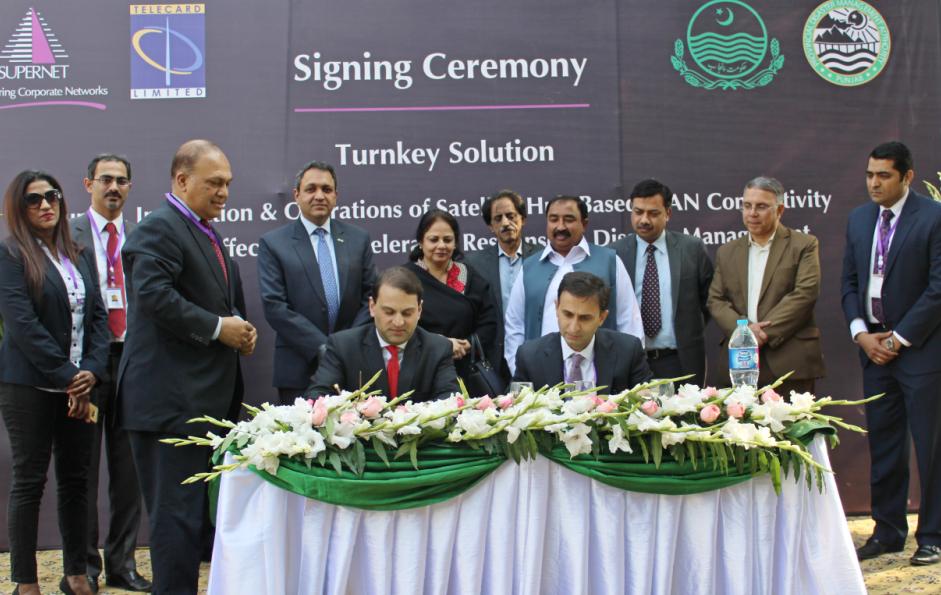 PDMA (Punjab) has signed an agreement with Supernet Limited a wholly owned subsidiary of Telecard Ltd. for provision of Satellite Based Data Connectivity Contract for effective and accelerated disaster Management

PDMA (Punjab) has signed an agreement with Supernet Limited a wholly owned subsidiary of Telecard Ltd. for provision of Satellite Based Data Connectivity Contract for effective and accelerated disaster Management

Chief Minister, Punjab has emphasized that in his commitment to safeguard the lives, properties, livestock, crops and livelihoods of the vulnerable communities of flood prone area, it is vital that the Provincial Government, District Administrations, Civil Society Organizations and the Private Sector discharge their respective roles and responsibilities and complement each other in achieving shared goals of disaster management. On behalf of the PDMA Punjab, its Director General Mr. Khalid Sherdil signed the agreement and said “In order to implement the vision of Chief Minister to make the Punjab province a disaster resilient province of Pakistan, the connectivity thus providedwill enable the PDMA/DDMA’s teams at far flung flood prone areas / remote locations to communicate with the central Control Room of PDMA on a real time basis enabling timely reporting on disaster as it happens as well as for monitoring the progress of rescue, relief & rehabilitation operations during disaster real time.Supernetwould establish a satellite hub based network for PDMA to connectflood prone districts Muzaffargarh, Layyah, Bhakkar, DG Khan, Rajanpur, Bahawalpur and Rahim Yar Khan Sialkot, Hafizabad, Gujranwala, Narowal, Gujrat, Rawalpindi,Mianwali, Khushabetc. as well as proving Satellite solution on mobile vehiclesconnected with Central Control Room of PDMA on the Go Bases.This network will be capable of delivering a variety of IP-based services such as data communication, Internet access, voice, and video etc.Group CEO Mr. ShamsArfeen signed on behalf of Supernetand said that Supernetwill provide turnkey solution by establishing VSAT Hub System enabling PDMA to connect its remote sites online. Imran Akhtar Shah Advisor to Government Projects addressed said “Supernet /Telecard is excited to partner with Government of Punjab in providing real-time ICT Solutions across Punjab.

Xiaomi surpasses Apple by Q2 2021 to be the No.1 brand in the world. 1 wearable brand

Xiaomi surpasses Apple by Q2 2021 to be the No.1 brand in the world. 1 wearable brand. Canalys has released data that shows the global ... Read More

Choose The Best P Series Device For Your Pocket

Choose The Best P Series Device For Your Pocket Lahore May 10, 2017: Huawei P Series is one of the most popular smartphone series by ... Read More