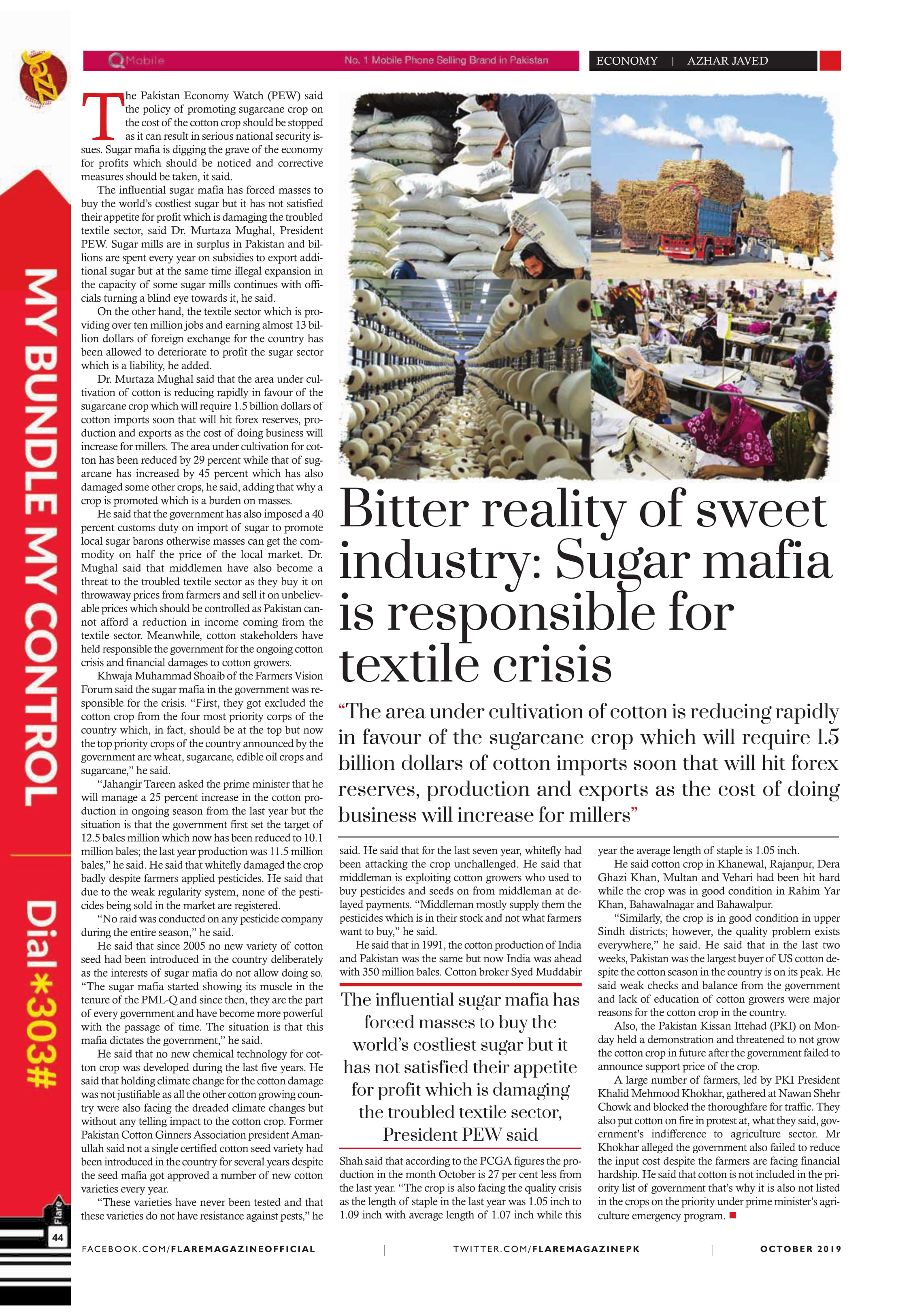 The area under cultivation of cotton is reducing rapidly in favour of the sugarcane crop which will require 1.5 billion dollars of cotton imports soon that will hit forex reserves, production and exports as the cost of doing business will increase for millers

The influential sugar mafia has forced masses to buy the world’s costliest sugar but it has not satisfied their appetite for profit which is damaging the troubled textile sector, President PEW said 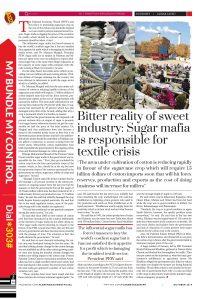 The Pakistan Economy Watch (PEW) said the policy of promoting sugarcane crop on the cost of the cotton crop should be stopped as it can result in serious national security issues.

Sugar mafia is digging the grave of the economy for profits which should be noticed and corrective measures should be taken, it said.

The influential sugar mafia has forced masses to buy the world’s costliest sugar but it has not satisfied their appetite for profit which is damaging the troubled textile sector, said Dr. Murtaza Mughal, President PEW.

Sugar mills are in surplus in Pakistan and billions are spent every year on subsidies to export additional sugar but at the same time illegal expansion in the capacity of some sugar mills continues with officials turning a blind eye towards it, he said.

On the other hand, the textile sector which is providing over ten million jobs and earning almost 13 billion dollars of foreign exchange for the country has been allowed to deteriorate to profit the sugar sector which is a liability, he added.

Dr. Murtaza Mughal said that the area under cultivation of cotton is reducing rapidly in favour of the sugarcane crop which will require 1.5 billion dollars of cotton imports soon that will hit forex reserves, production and exports as the cost of doing business will increase for millers.

The area under cultivation for cotton has been reduced by 29 percent while that of sugarcane has increased by 45 percent which has also damaged some other crops, he said, adding that why a crop is promoted which is a burden on masses.

He said that the government has also imposed a 40 percent customs duty on import of sugar to promote local sugar barons otherwise masses can get the commodity on half the price of the local market.

Dr. Mughal said that middlemen have also become a threat to the troubled textile sector as they buy it on throwaway prices from farmers and sell it on unbelievable prices which should be controlled as Pakistan cannot afford a reduction in income coming from the textile sector.

Meanwhile, cotton stakeholders have held responsible the government for the ongoing cotton crisis and financial damages to cotton growers.

Khwaja Muhammad Shoaib of the Farmers Vision Forum said the sugar mafia in the government was responsible for the crisis.

“Jahangir Tareen asked the prime minister that he will manage a 25 percent increase in the cotton production in ongoing season from the last year but the situation is that the government first set the target of 12.5 bales million which now has been reduced to 10.1 million bales; the last year production was 11.5 million bales,” he said.

He said that whitefly damaged the crop badly despite farmers applied pesticides. He said that due to the weak regularity system, none of the pesticides being sold in the market are registered.

“No raid was conducted on any pesticide company during the entire season,” he said.

He said that since 2005 no new variety of cotton seed had been introduced in the country deliberately as the interests of sugar mafia do not allow doing so.

“The sugar mafia started showing its muscle in the tenure of the PML-Q and since then, they are the part of every government and have become more powerful with the passage of time. The situation is that this mafia dictates the government,” he said.

Former Pakistan Cotton Ginners Association president Amanullah said not a single certified cotton seed variety had been introduced in the country for several years despite the seed mafia got approved a number of new cotton varieties every year.

He said that for the last seven year, whitefly had been attacking the crop unchallenged. He said that middleman is exploiting cotton growers who used to buy pesticides and seeds on from middleman at delayed payments.

“Middleman mostly supply them the pesticides which is in their stock and not what farmers want to buy,” he said.

He said that in 1991, the cotton production of India and Pakistan was the same but now India was ahead with 350 million bales. Cotton broker Syed Muddabir Shah said that according to the PCGA figures the production in the month October is 27 per cent less from the last year.

He said cotton crop in Khanewal, Rajanpur, Dera Ghazi Khan, Multan and Vehari had been hit hard while the crop was in good condition in Rahim Yar Khan, Bahawalnagar and Bahawalpur.

“Similarly, the crop is in good condition in upper Sindh districts; however, the quality problem exists everywhere,” he said. He said that in the last two weeks, Pakistan was the largest buyer of US cotton despite the cotton season in the country is on its peak. He said weak checks and balance from the government and lack of education of cotton growers were major reasons for the cotton crop in the country.

Also, the Pakistan Kissan Ittehad (PKI) on Monday held a demonstration and threatened to not grow the cotton crop in future after the government failed to announce support price of the crop.

A large number of farmers, led by PKI President Khalid Mehmood Khokhar, gathered at Nawan Shehr Chowk and blocked the thoroughfare for traffic. They also put cotton on fire in protest at, what they said, government’s indifference to agriculture sector.

Mr Khokhar alleged the government also failed to reduce the input cost despite the farmers are facing financial hardship. He said that cotton is not included in the priority list of government that’s why it is also not listed in the crops on the priority under prime minister’s agriculture emergency program.