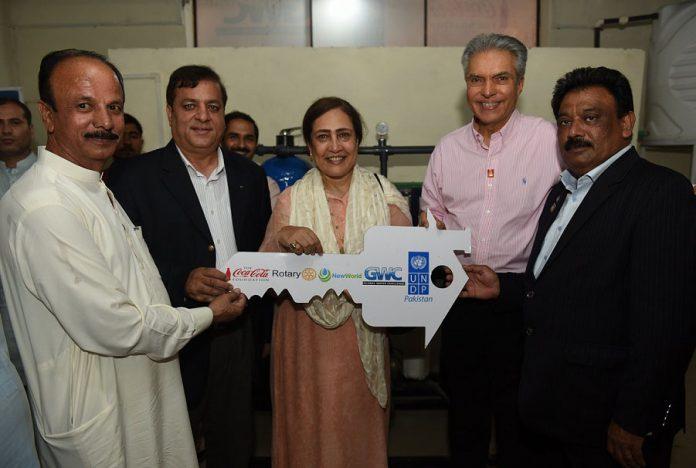 Coca-Cola has partnered with Rotary Pakistan National Polio plus Committee, and UNDP as administrative partner, for the project ‘Zindagi’, with a mission to provide clean drinking water and mitigating the transmission of water-borne diseases in Pakistan. The US$80,000 project is currently in its second phase and has been funded by The Coca-Cola Foundation, and the fourth of five solar-powered filtration plants in this phase has been inaugurated in Basti Rahim Baksh, RenalaKhurd, Okara District. Around 100,000 individuals, including 20,000 women and 40,000 children, will be benefiting through Zindagi phase 2 project.  The plant was jointly inaugurated by MPA Mrs. Jugnu Mohsin, Coca-Cola Pakistan’s Director PAC, FahadQadir, and Rotary National Chair Aziz Memon. 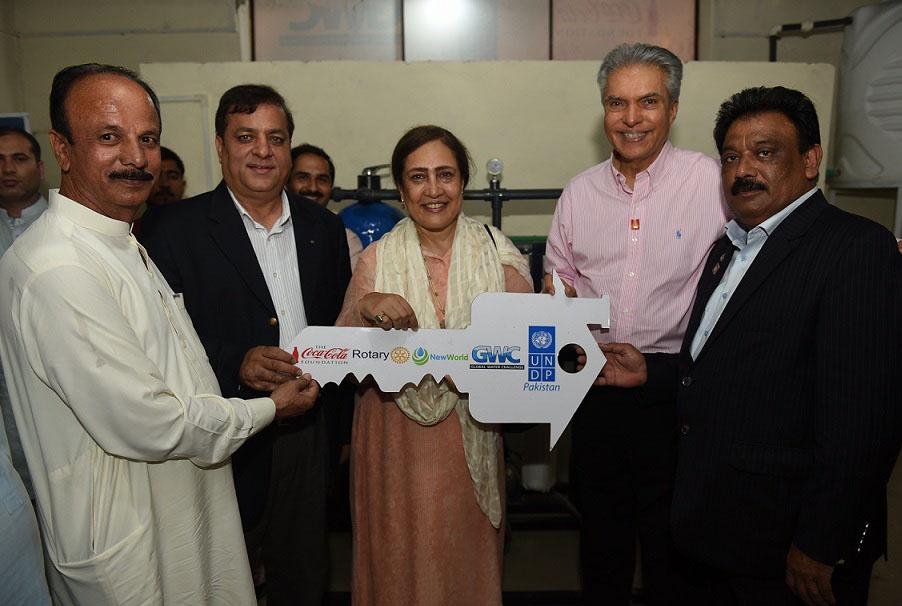 The Phase 2 of the project was launched earlier this year for providing convenient access to clean drinking water to a population of 140,000 across Punjab and Sindh’s catchment areas, with each plant recharging 3,000 gallons of water twice a day per shift. Previously, the very first reverse osmosis plant in Malir town of Karachi installed in 2014 has helped in the reduction of water-borne diseases by an estimated 70%.

Speaking about the partnership between Coca-Cola and Rotary, FahadQadir, said “This is the 12th solar powered water filtration that has been installed in a water-stressed area with the vision to provide potable water for rural households across Pakistan. Our partnership with Rotary has been internationally acclaimed on Rotary Day at United Nations HQ as the best example of responsible and inclusive partnership to eradicate polio from Pakistan. With a deep commitment for Pakistan’s welfare, our ethos is to create shared value through sustainable development, which is reliant on the health of our nation.”

The land for the installation of the water filtration plant has been donated by Mrs. Jugnu Mohsin and a symbolic key was presented to the local authorities at the inauguration, highlighting the importance of project sustainability through community’s contribution. Speaking at the ceremony, Mrs. Mohsin highlighted “I am proud to be part of a project that seeks community’s well being especially through the provision of clean drinking water. When multinationals like Coca-Cola, Rotary and UNDP come forward for a joint cause, that’s when change happens for the better. However, we would still need the locals of RenalaKhurd to take ownership of this water filtration plant and teach children, men and women about the importance of hygiene and safe use of water. Polio can paralyze a nation, so let’s join hands to prevent this disease before it’s too late.”

Thanking Mrs. Mohsin at the ceremony Mr. Memon said, “Polio is a water borne viral disease and unfortunately Pakistan still suffers with this epidemic. However, our efforts with partners like Coca-Cola, UNDP and Government authorities have truly played in instrumental role with almost a reduction by 90% in the polio cases this year. This water filtration plant is our testament to the community of Okara and we will have a polio-free Pakistan soon.”

Easier access to clean drinking water helps in improving mortality rates and living standards and it allows women to save time which was previously utilized for the collection of water from far away sources. With community-level awareness campaigns about hygiene and medical education, the medical expenses of families will also decrease due to reduction in diseases.

By offering the widest 4G roaming services in Pakistan, the country’s leading telecommunication, Zong 4G has come up with another advantageous offer for those...
Read more
Business

Infinix is all set to launch its most anticipated smartphone, Hot 8 with 5000mAh Big Battery in Pakistan

With a big battery of 5000mAh and a big display of 6.6”, Infinix is leaving its competitors behind and pacing towards becoming the hottest...
Read more
Telecom