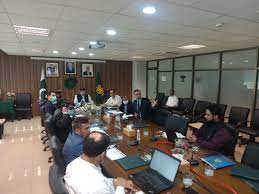 Islamabad, August 06, 2021: The Policy Committee of the Universal Service Fund (USF) under the Ministry of Information Technology (IT) and Telecommunication has approved the budget of over PKR 18 billion for 30 projects for the financial year 2021-22 and directed to release funds. The Policy Committee meeting was chaired by the Federal Minister for IT and Telecommunication, Syed Amin Ul Haque and attended by the Federal Secretary for IT and Telecommunication, Dr. Sohail Rajput, Senior Joint Secretary, Toaha Hussain Bugti, Member Telecom, Muhammad Omar Malik, and other representatives from the Cabinet and Finance Division. The Chief Executive Officer (CEO) of USF, Haaris Mahmood Chaudhary apprised the Policy Committee on the performance of the last three years and the proposed plans for the new Financial Year 2021-22.

While addressing the meeting, Federal Minister for IT and Telecommunication, Syed Amin Ul Haque said, “Under the present government, the USF has shown a 100 % increase in its productivity since inception, with 6 projects in the first year, 12 projects in the second year and 25 projects in the third year. It is a testament to the rapid and exceptional performance of the company on which the team deserve compliments. The USF company must maintain this positive momentum with transparency, quality, and timely completion of projects.” As advised by the Prime Minister, the Federal Minister directed the USF to immediately start projects for the provision of broadband services at key tourist destinations in the Northern Areas and complete them on priority basis. He expressed satisfaction over the proposed plans to provide uninterrupted high speed mobile broadband services on national highways and to deliver optical fiber cable to the level of Union Councils across the country to adapt Pakistan to the requirements of the future, including 5G.

The Federal Minister of IT and Telecommunication, Syed Amin Ul Haque also said that broadband services and optical fiber projects in the rural and remote areas of the four provinces are fundamental to the fulfillment of Digital Pakistan vision. At the same time, the USF should develop a system of strict monitoring of these projects so that there are no shortcomings and unnecessary delays. On the recommendation of the committee members, the Federal Minister directed the USF to submit a progress report on the status of the projects every three months.

Earlier, Haaris Mahmood Chaudhary, CEO-USF apprised the members of the committee and said that the project in Kohistan region has faced delays due to extreme weather conditions and difficult routes, while another project in the Ex-FATA province due to the security situation in the area. These projects are only 5% of the total projects while 95% of the projects are progressing at their own pace and almost 50 to 75% of the work has been completed. Further, he added that the USF has a transparent system of technical and monitoring audit based on which the funds are released in proportion to the work completed on the projects.

When Facebook split its messaging services from the core application in the summer of last year, consumers have felt unhappy at all. But now,...
Read more
Business

APBF for consistency and transparency in policies to improve GCI

: itel Pakistan has taken over the mobile phone arena with one after the other phenomenal triumphs. Recently the A-Series, showing exponential growth, has...
Read more