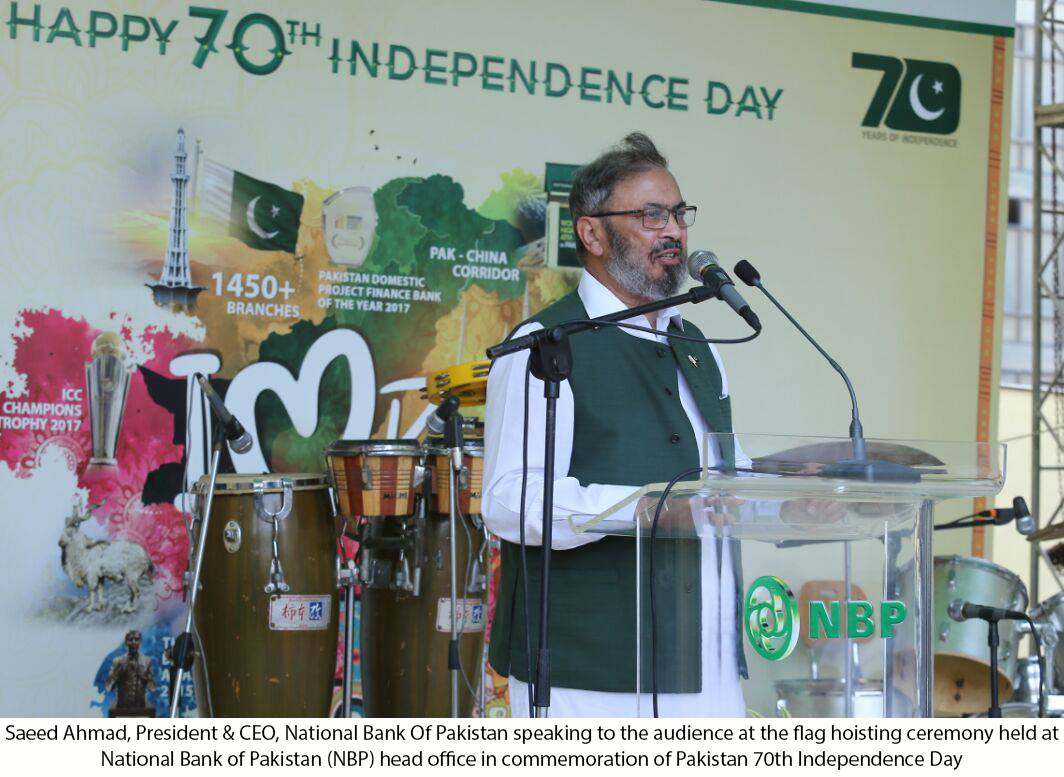 Pakistan is our identity – we owe our best for its prosperity: All efforts should be to ensure provision of basic right even to poor – Saeed Ahmad

Pakistan is our identity – we owe our best for its prosperity: All efforts should be to ensure provision of basic right even to poor – Saeed Ahmad

Karachi, August 15, 2017: In commemoration of Pakistan 70th Independence Day, a flag hoisting ceremony was held at National Bank of Pakistan (NBP) Head Office. The flag was hoisted by Mr. Saeed Ahmad President & CEO NBP along with executives and employees where they also prayed for the progress, peace and  prosperity of the country and its citizens. On this auspicious occasion, NBP also launched its 360 degree marketing campaign covering print, electronic and social media with the tagline of “Colors Of Prosperity” to further celebrate this opportune time of the year. Moreover, the NBP Building was also illuminated for last few days on the event of Independence Day.

“Pakistan was made as a premier Democratic Islamic Welfare state, a country where all segments of the society are provided equal opportunity to improve their lives without any dominating group depriving the others. We should not think what Pakistan gave us, instead we must ask what have we given to Pakistan” President and CEO of NBP Saeed Ahmad told a big gathering of employees who came to celebrate 14th August 2017 – Pakistan’s 70th Independence Day.

Speaking at the occasion, Mr. Saeed Ahmad, President and CEO, NBP paid tribute to Quaid-e-Azam, Allama Iqbal and other national heroes who struggled for the independence and creation of Pakistan.  He reminded “The foundation of this great nation is based on three supreme principles given to us by the father of the nation, namely Unity, Faith and Discipline. Whichever religion, sect or province we belong to and whatever profession we pursue, we should put our country first because Pakistan is our real identity”.  He said that the Quaid’s deeply felt desire was for a country where the poor and marginalised sections of society are not exploited and are provided with the same opportunities as the powerful and wealthy, and where minorities stand shoulder to shoulder with the majority groups. He emphasised that the founding fathers believed there should be no discrimination and all Pakistani brethren – Muslim as well as those of other faiths – must be treated equally in the eyes of the law and by society, and this is enshrined in the constitution. ”

He cited the sacrifice made by millions of people in creation of Pakistan including some of his own ancestors who lost lives and limbs. “Today we remember our forefathers and pay our gratitude to them for making extraordinary sacrifices to give us an identity. We must continue to remind our younger generations the purpose of the creation of Pakistan and struggle through which we achieved this goal”, he said.

“It is indeed an honour and moment of great pride for all of us that we are celebrating our independence day. We shall further boost quality of services offered by National Bank pf Pakistan and make it truly a “Nation’s Bank”.  He said that all of the employees at every level are like a family and we all have to strive hard to make this bank most successful organization of the industry. “ He further added.

He said that we owe to Pakistan to work hard and fulfil our duties not just for our own advancement but for the prosperity of our beloved country.

This was the first time that NBP had such an intensive program on the Independence Day where a very large number of employees and their families got together including more than 120 children of all ages who took part in national songs and performed on stage to amaze the audience.

The president further saluted and thanked the countrymen and NBP Employees to make him and the Bank proud.

Post Views: 33
TAGS Pakistan is our identity – we owe our best for its prosperity: All efforts should be to ensure provision of basic right even to poor – Saeed AhmadWebsite
Share This