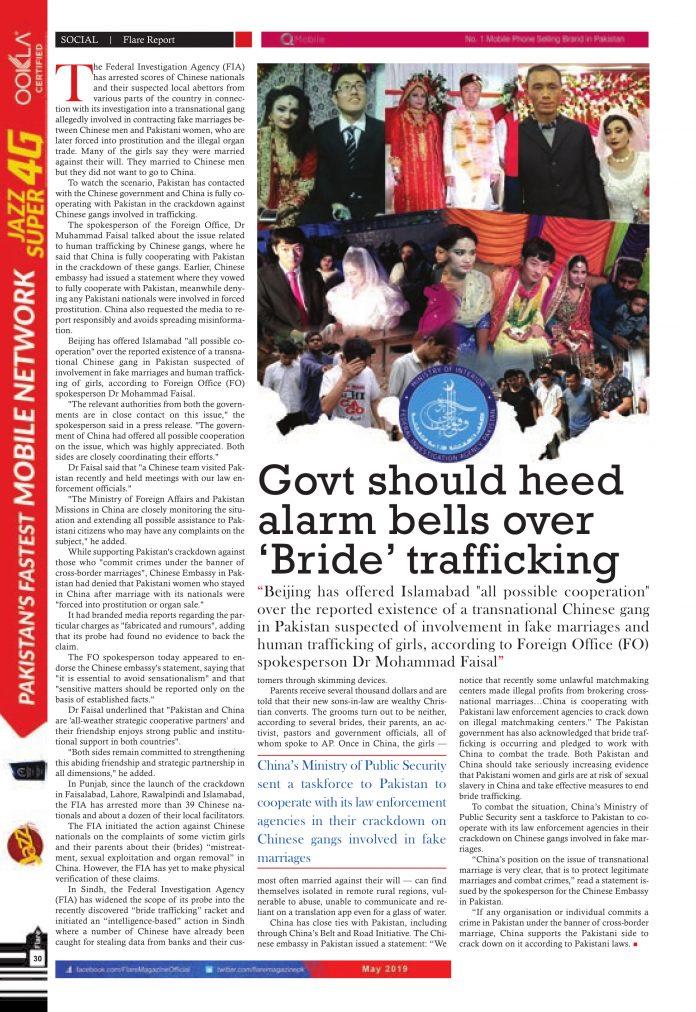 “Beijing has offered Islamabad “all possible cooperation” over the reported existence of a transnational Chinese gang in Pakistan suspected of involvement in fake marriages and human trafficking of girls, according to Foreign Office (FO) spokesperson Dr Mohammad Faisal” 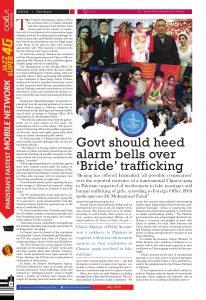 The Federal Investigation Agency (FIA) has arrested scores of Chinese nationals and their suspected local abettors from various parts of the country in connection with its investigation into a transnational gang allegedly involved in contracting fake marriages between Chinese men and Pakistani women, who are later forced into prostitution and the illegal organ trade. Many of the girls say they were married against their will. They married to Chinese men but they did not want to go to China.

To watch the scenario, Pakistan has contacted with the Chinese government and China is fully cooperating with Pakistan in the crackdown against Chinese gangs involved in trafficking.

The spokesperson of the Foreign Office, Dr Muhammad Faisal talked about the issue related to human trafficking by Chinese gangs, where he said that China is fully cooperating with Pakistan in the crackdown of these gangs. Earlier, Chinese embassy had issued a statement where they vowed to fully cooperate with Pakistan, meanwhile denying any Pakistani nationals were involved in forced prostitution. China also requested the media to report responsibly and avoids spreading misinformation.

Beijing has offered Islamabad “all possible cooperation” over the reported existence of a transnational Chinese gang in Pakistan suspected of involvement in fake marriages and human trafficking of girls, according to Foreign Office (FO) spokesperson Dr Mohammad Faisal.

“The relevant authorities from both the governments are in close contact on this issue,” the spokesperson said in a press release. “The government of China had offered all possible cooperation on the issue, which was highly appreciated. Both sides are closely coordinating their efforts.”

“The Ministry of Foreign Affairs and Pakistan Missions in China are closely monitoring the situation and extending all possible assistance to Pakistani citizens who may have any complaints on the subject,” he added.

While supporting Pakistan’s crackdown against those who “commit crimes under the banner of cross-border marriages”, Chinese Embassy in Pakistan had denied that Pakistani women who stayed in China after marriage with its nationals were “forced into prostitution or organ sale.”

It had branded media reports regarding the particular charges as “fabricated and rumours”, adding that its probe had found no evidence to back the claim.

The FO spokesperson today appeared to endorse the Chinese embassy’s statement, saying that “it is essential to avoid sensationalism” and that “sensitive matters should be reported only on the basis of established facts.”

Dr Faisal underlined that “Pakistan and China are ‘all-weather strategic cooperative partners’ and their friendship enjoys strong public and institutional support in both countries”.

“Both sides remain committed to strengthening this abiding friendship and strategic partnership in all dimensions,” he added.

In Punjab, since the launch of the crackdown in Faisalabad, Lahore, Rawalpindi and Islamabad, the FIA has arrested more than 39 Chinese nationals and about a dozen of their local facilitators.

The FIA initiated the action against Chinese nationals on the complaints of some victim girls and their parents about their (brides) “mistreatment, sexual exploitation and organ removal” in China. However, the FIA has yet to make physical verification of these claims.

In Sindh, the Federal Investigation Agency (FIA) has widened the scope of its probe into the recently discovered “bride trafficking” racket and initiated an “intelligence-based” action in Sindh where a number of Chinese have already been caught for stealing data from banks and their customers through skimming devices.

Parents receive several thousand dollars and are told that their new sons-in-law are wealthy Christian converts. The grooms turn out to be neither, according to several brides, their parents, an activist, pastors and government officials, all of whom spoke to AP. Once in China, the girls — most often married against their will — can find themselves isolated in remote rural regions, vulnerable to abuse, unable to communicate and reliant on a translation app even for a glass of water.

China has close ties with Pakistan, including through China’s Belt and Road Initiative. The Chinese embassy in Pakistan issued a statement: “We notice that recently some unlawful matchmaking centers made illegal profits from brokering cross-national marriages…China is cooperating with Pakistani law enforcement agencies to crack down on illegal matchmaking centers.” The Pakistan government has also acknowledged that bride trafficking is occurring and pledged to work with China to combat the trade. Both Pakistan and China should take seriously increasing evidence that Pakistani women and girls are at risk of sexual slavery in China and take effective measures to end bride trafficking.

To combat the situation, China’s Ministry of Public Security sent a taskforce to Pakistan to cooperate with its law enforcement agencies in their crackdown on Chinese gangs involved in fake marriages.

“China’s position on the issue of transnational marriage is very clear, that is to protect legitimate marriages and combat crimes,” read a statement issued by the spokesperson for the Chinese Embassy in Pakistan.

“If any organisation or individual commits a crime in Pakistan under the banner of cross-border marriage, China supports the Pakistani side to crack down on it according to Pakistani laws.

An evening with the orphan children

“Do not let what you cannot do interfere with what you can do,” John Wooden has rightly said these words that if you cannot...
Read more
Business

Eighteen – Pakistan’s most luxurious and modern, mixed use, residential project, in an aim to enhance more convenience for its investors and end-users based...
Read more