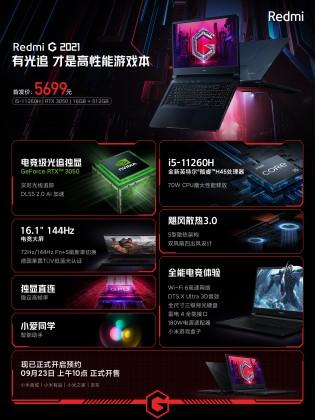 As stated in the announcement, Xiaomi has unveiled two gaming laptops this morning one that has an Intel processor and one that has an AMD processor. Both come with Nvidia graphics with RTX. These are the Redmi G 2021 laptops.

Both laptops feature 16.1″ displays that can go the ability to go up to 144Hz of refresh rate. There’s a 72 Hz mode, too, if the GPU isn’t quite enough for a particular game. The updated Hurricane Cooling 3.0 system that has two 12V fans, as well as five heat pipes made of copper, will attempt to stop that from happening by allowing CPU and GPU to run at full speed.

The laptops come with the same configuration of memory with 16 GB RAM and 512 GB of storage. They also share Wi-Fi 6 connectivity, DTS Ultra 3D audio as well as a backlit keyboard (with three levels of brightness).

Its Intel version is driven by a Core i5-11260H (Tiger Lake) which is a hexa-core processor that can boost its speed that can reach 4.4 GHz. This model is equipped with the GeForce RTX 3050 GPU. 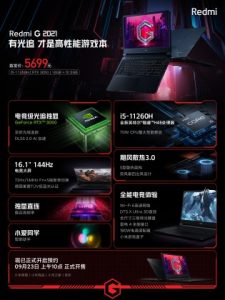 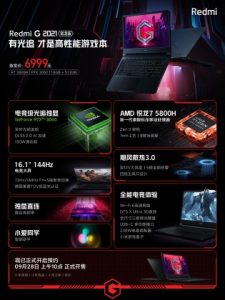 The AMD version is equipped with the Ryzen 5800H that has 8 Zen 3 cores and the same maximum boost clock speed of 4.4 GHz. This model, however, comes with the more powerful GeForce RTX 3060 GPU, which has a TDP of as high as 130W.

How to access the Signals Not to Self-feature of WhatsApp

Signals provide a useful "Note to Self" feature that allows users to send messages, images, and videos to themselves. Here's how How to access the ... Read More

Online shopping is one of the most commonly prevailing activities among the working class in Pakistan. Be it high-end electronic gadgetries or average-costing mundane items, ... Read More

100 Million Dollars worth of MoUs signed at ITCN Asia 2017